Hi all. You get Matt the next couple days. I just want to remind y’all about our annual fundraiser that’s underway through later this month. We have two cool t-shirt designs and umbrellas available to purchase if you’d like. The annual fundraiser helps support Eric and myself and our work keeping the site on time and online. Regardless, we appreciate your kind words and support throughout the year, and we are thrilled you choose us as a vehicle to stay informed.

If you’re sick of the warm, ridiculously humid weather, we have good news. The end is pretty much here. Let’s walk through the forecast.

We had quite the light show last night over parts of the Houston area.

About 90 seconds worth of lightning over #Houston condensed. Wow. #houwx pic.twitter.com/6l5ELoYpVf

In fact, some areas did receive over two inches of rain from the storms yesterday evening. 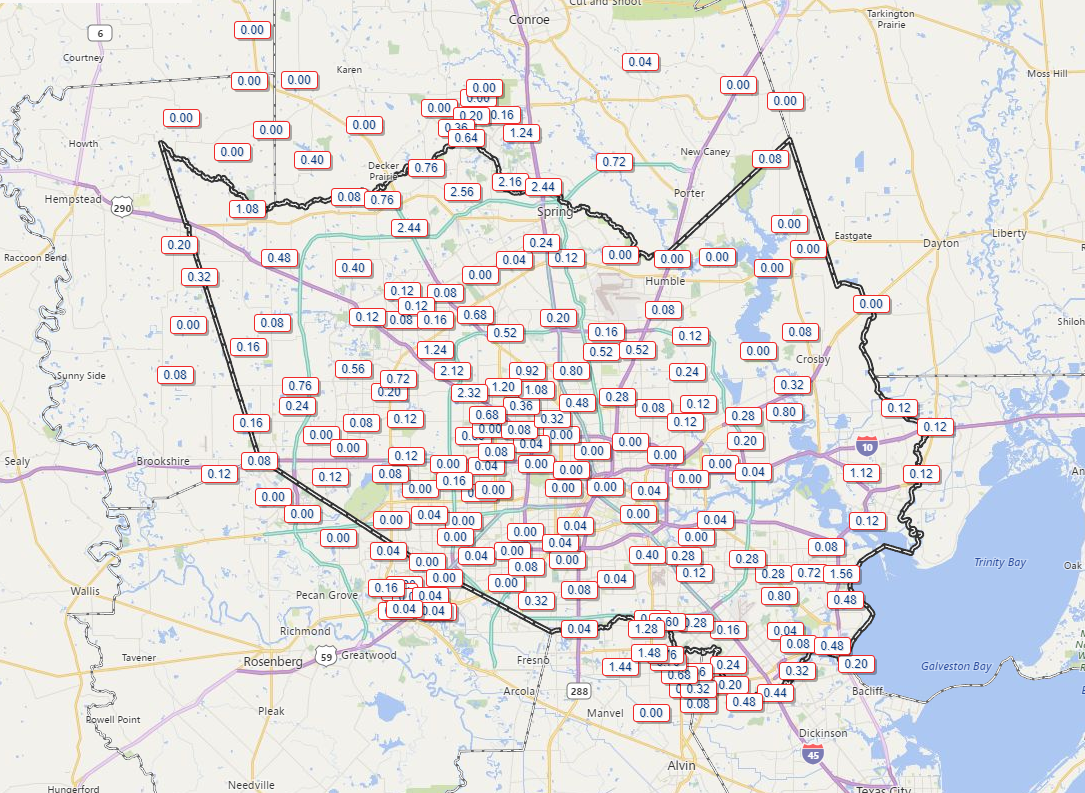 Total rainfall in the last 24 hours exceeded 2 inches near Tomball, The Woodlands, and in parts of northwest Houston. (Harris County FWS)

Some locally heavy rains also fell south of Houston. With the exception of a handful of remaining showers, it’s now quiet this morning. The cold front responsible for last night’s noisy storms is now sitting offshore. It’s still a bit humid, so southern parts of our area will have patchy dense fog to deal with this morning.

Otherwise, I would expect a good bit of cloud cover today, along with a chance for some lighter rain, drizzle, or showers at times. No serious weather is expected though. It will be noticeably cooler today with high temperatures probably not getting much past the low-70s in Houston. Areas south of Houston could still push mid-to upper-70s however.

The next cold front arrives in the Houston area tonight. As it does so, expect showers and some embedded stronger thunderstorms to accompany it on its move south. The front should arrive in the far northern suburbs around midnight, give or take a couple hours, into the Houston area after 1-3 AM, and to the coast after 3-5 AM. Unlike our cold front last week, this edition will not come with a sharp, quick clearing line. In fact, the atmosphere behind tonight’s front will remain chilly, cloudy, and damp into much of Friday. Expect showers, perhaps a thunderstorm, and periods of light rain or drizzle along with a stiff north breeze during the day Friday. We should see around one to two inches of additional rainfall with this front.

Temperatures will remain mired in the 50s most of the day. Rain chances should dwindle as we get toward evening.

If we’re placing odds on the best weekend day, it’s likely to be Saturday. The chance of rain isn’t zero on Saturday, but it looks relatively low right now. Expect mostly cloudy skies with temperatures warming from the 40s in the morning into the middle 50s in the afternoon.

Sunday begins our descent into our first taste of winter. Look for scattered showers and a chance of thunderstorms Sunday. Details are still a bit hazy at this point. Much will depend on exactly how a weak offshore system tracks. Right now, it looks to stay mostly offshore, keeping the highest rain chances south and east of Houston. If that shifts a bit, we could be talking warmer temps and higher rain chances elsewhere. For now, expect modest rain chances and temperatures warming from the upper 40s into the mid- to upper-50s. Some 60s will be possible near the coast. Again, this could change. We’ll update tomorrow.

The details for next week are slowly becoming more clear. Look for a slightly warmer day Monday before a strong cold front plows through Monday night and Tuesday. Right now, it doesn’t appear to have a ton of punch to it, rain-wise. But it will have a huge punch, temperature-wise. After upper-50s or low-60s on Monday, look for low-40s Monday night, followed up by a cold, raw Tuesday with a strong, gusty northerly wind. We’ll likely not get much past the low-50s on Tuesday before our first real shot at 30s on Tuesday night and Wednesday morning. 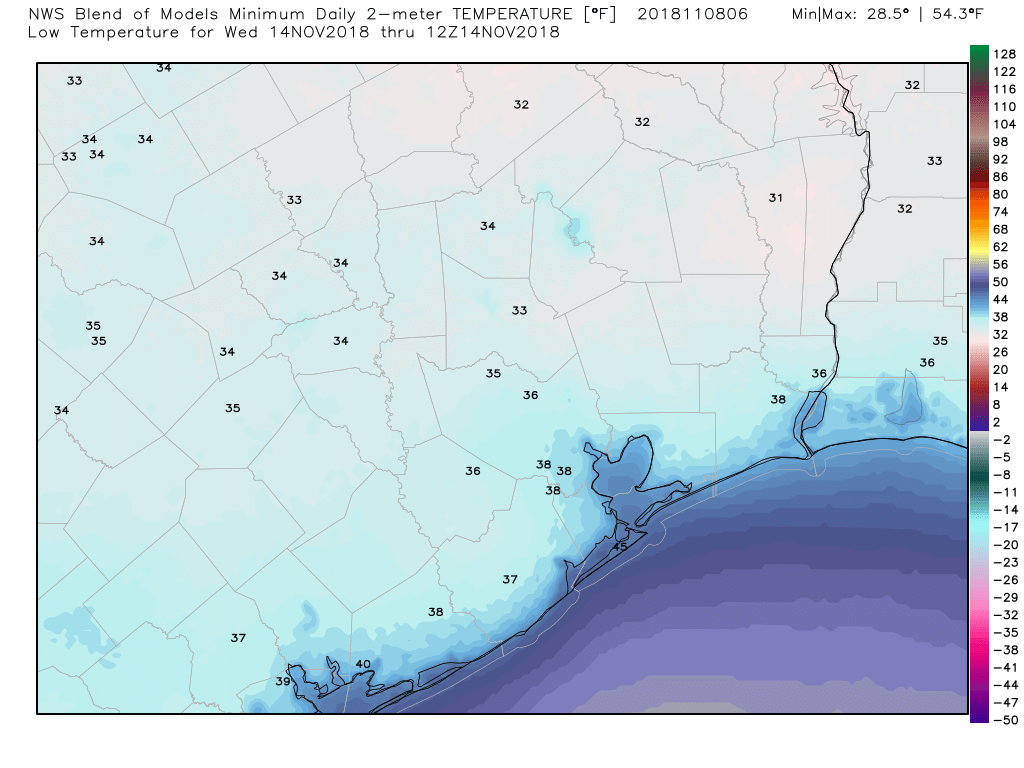 The current Wednesday morning low temperature forecast from the NWS National Blend of Models shows widespread 30s in the region. We’ll watch this for tweaks in the days ahead. (NWS via Weather Bell)

How cold will it ultimately get? We’ll see, but some modeling is rather aggressive in pushing us into the mid-30s (see above) or even a little colder Wednesday morning. For now, I’d expect a high chance we see at least upper-30s in the Greater Houston area. Unlike Friday’s front, there should be an aggressive push of drier air behind next week’s front. That means we will clear out the clouds and see a good bit of sunshine, but bundle up! More tomorrow.