Good morning, and it’s a soggy one. This won’t herald a total washout this weekend, but it has brought autumn back to the region after a mostly summery week.

Right off the bat, radar as of about 5:15 this morning shows numerous showers and embedded thunderstorms working across the region.

Radar shows a busy morning in the clouds with widespread rain and thunderstorms. (College of DuPage)

Expect off and on rain to continue all morning, gradually slowing down and becoming more infrequent this afternoon. We should dry out tonight.

The rain is actually occurring behind a cold front that has basically pushed through everywhere as of 5:15 AM. 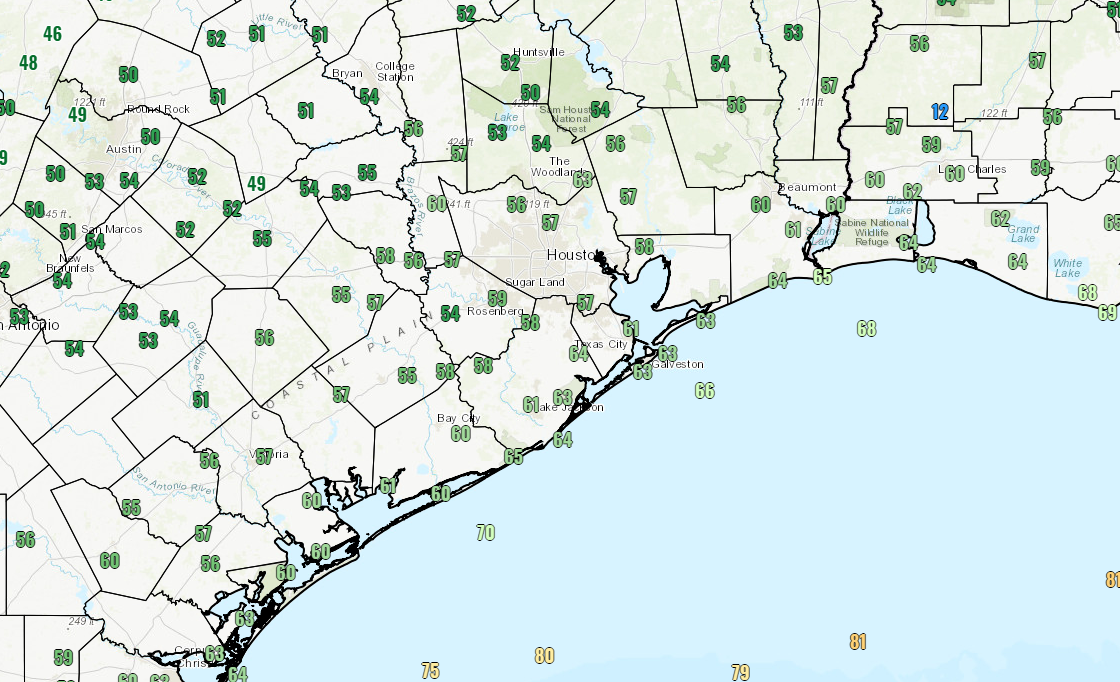 Temperatures have fallen into the 50s almost everywhere already. They won’t get much higher than this for the rest of the day. (NWS)

Just about all of us are in the 50s now, and don’t expect it to get much warmer. We will probably drop another few degrees this morning before stabilizing this afternoon. By tonight, those temperatures will settle into the upper-40s to around 50 degrees.

It will also be breezy at times today, with a steady north wind around 15 mph, but higher along the coast and Galveston Bay where wind advisories have been hoisted.

Saturday should be a bit of a gloomy looking day, but I don’t believe it will be a day where you need to adjust many plans. Look for a mix of clouds and a little sun. In the afternoon, there could be a few showers around. With a dry atmosphere, it would be unlikely that much of the moisture survives the trip from the clouds to the ground. I think the best chance for real showers or some rain to occur would be along the coast by later Saturday afternoon.

On Saturday night, expect a weak system to begin to organize offshore of Galveston. This will spread scattered showers and a chance of thunderstorms into Southeast Texas overnight and during the day Sunday. I don’t think Sunday will be a washout for everyone, but I do think most of us will see at least some rain. Near the coast, it could be heavy at times. 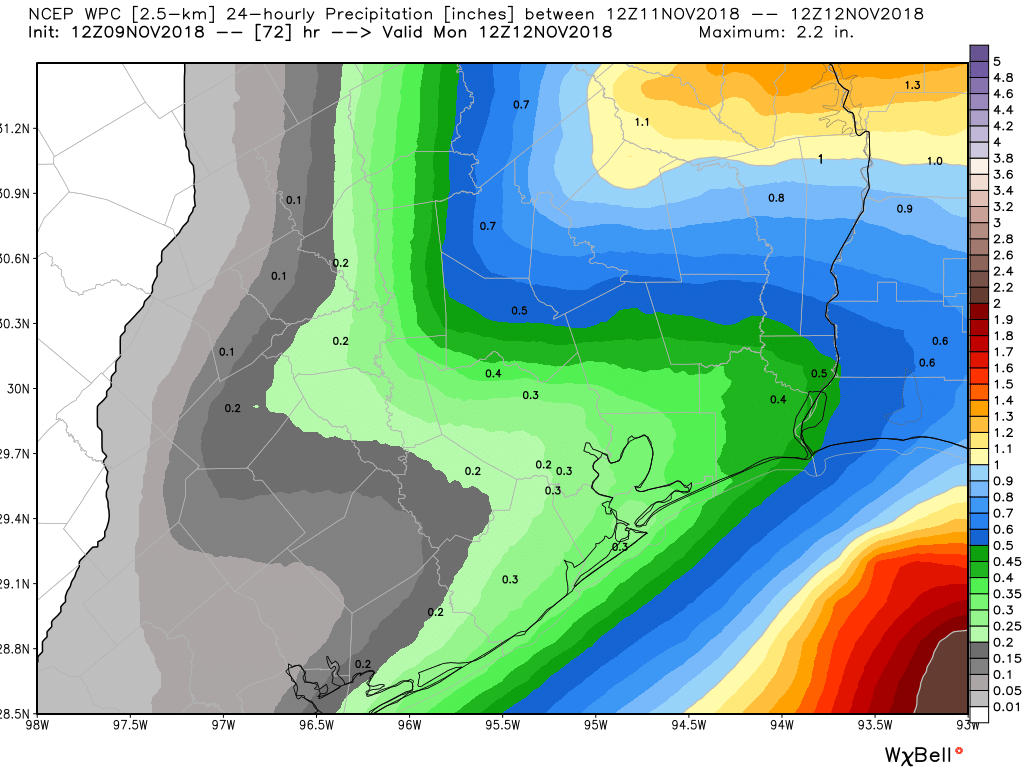 Total rainfall on Sunday and Sunday night should tally a quarter to a half-inch, with some coastal or far inland locales possibly seeing higher amounts. (NWS via Weather Bell)

All told, we should see another quarter to half-inch or so of rainfall, with isolated higher amounts likely, especially on the coast or well north and east of Houston. Temperatures will top off in the mid-50s on Saturday afternoon. They shouldn’t drop much below the upper-40s on Saturday night, and they likely won’t get past the mid-50s in most spots Sunday afternoon as well.

Sunday’s rain chances will carry into Monday, this time helped by a cold front approaching the area during the day. Monday’s weather could be a bit changeable. Expect scattered showers, light rain, or drizzle. There could be a few thunderstorms also. As of this morning, we expect the front to get to the coast by Monday evening. So we’ll probably see temperatures peak at some point in the early afternoon in the mid-to upper-50s and then begin to drop back toward the 40s by evening.

Overnight lows will settle into at least the low-40s Tuesday morning. Depending on how quickly we clear out Monday night, we could see pockets of 30s on Tuesday morning north of Houston.

Winds will begin to crank out of the north (yes, this is a true “norther” for Texas) on Monday afternoon behind the front. We currently expect 15-25 mph winds with higher gusts possible. At the coast and near Galveston Bay, winds should be even stronger.

The good news is that dry air will surge in behind the front meaning that Tuesday should see us clear out. Expect high temperatures to limp to around 50 degrees despite increasing sunshine. 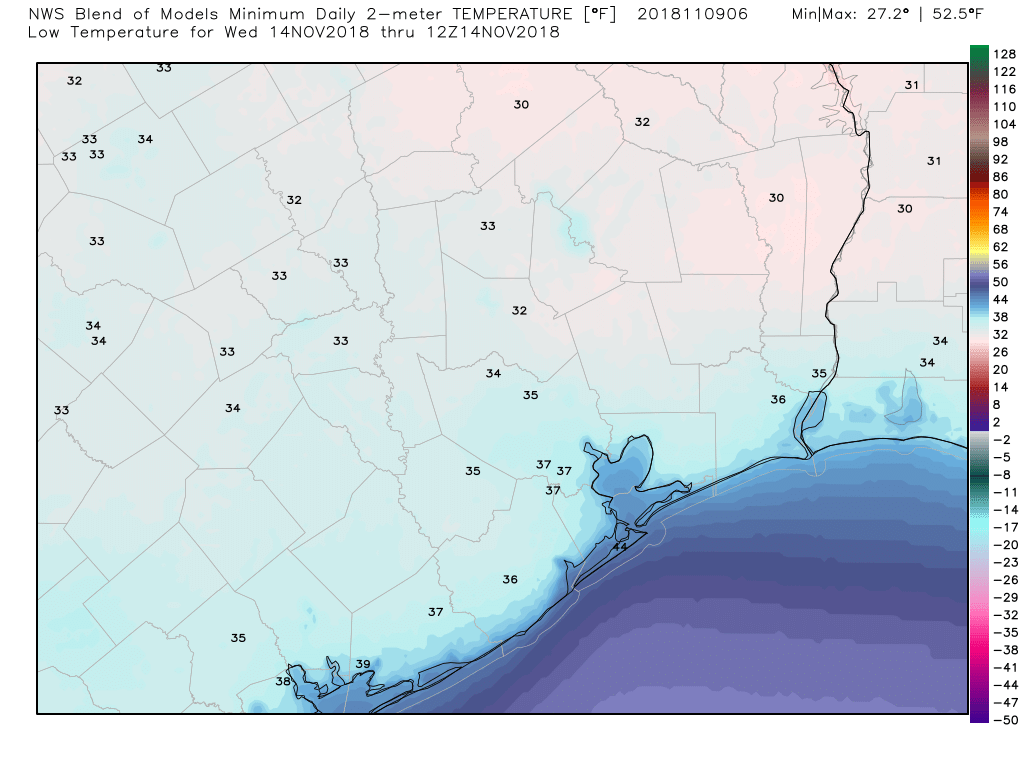 Tuesday night into Wednesday morning could see frost across a good part of the area. Lows in the 30s everywhere except the immediate coast. (NWS via Weather Bell)

Tuesday night will be our coldest of the season so far. We expect mid-to upper-30s in most of the area, but low-30s are a good bet north of Houston. Model forecasts of temperatures have fallen back about a degree or so since yesterday, so the trend is gradually for colder. We’ll have more on this for you Monday.

We’ll gradually moderate after Wednesday morning, with temperatures warming back into the middle or upper-50s and then 60s on Thursday. Right now, it looks as though we may have a somewhat extended period of drier weather in the wake of next week’s front. I feel like we’ve seen this before and it hasn’t materialized, so I’ll be a bit skeptical for the time being. But our weather modeling does seem to strongly argue for dry weather through at least the end of next week or next weekend, so we’ll see. More on Monday!

Reminder: Our annual fundraiser is ongoing. We’re selling t-shirts (with some killer designs), umbrellas, and accepting donations. Thanks for considering!

8 thoughts on “Soggy Friday sweeps autumn back into Southeast Texas”