February is not Houston’s prettiest month, at least not recently. In February of 2018, 82% of all observations at Bush Airport reported some degree of overcast skies. “Overcast skies” in this case would be defined as any observation reporting “OVC” for the cloud deck. That could be anything from a high, thin overcast with some sun peaking through to low, gray clouds or fog. Either way, some sort of grayness to the sky. 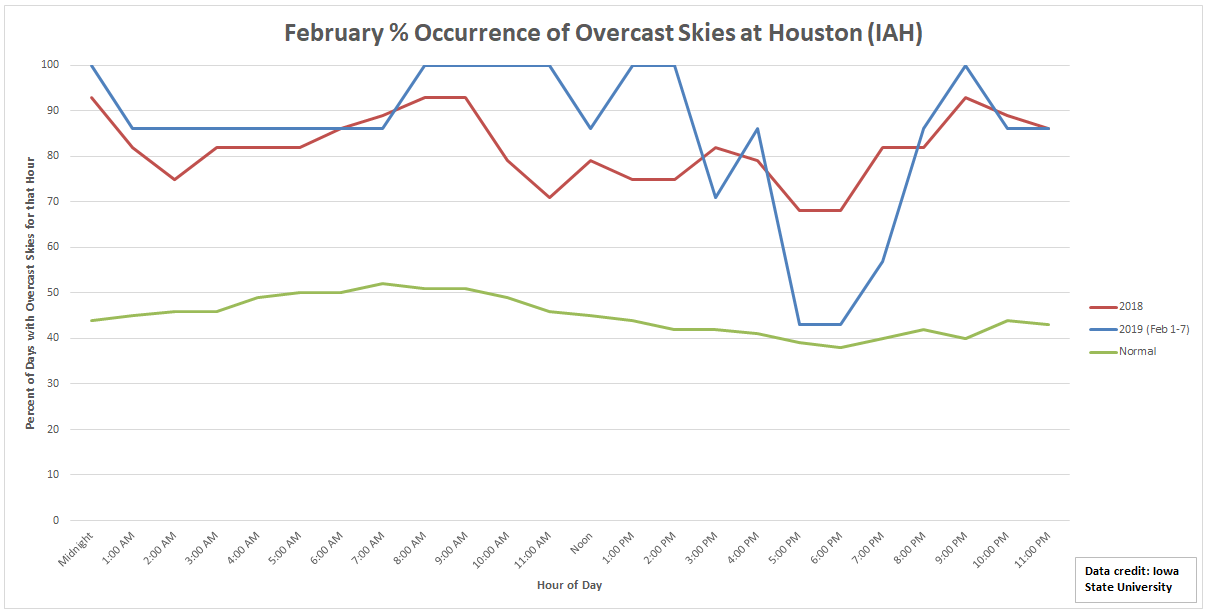 This February is picking up where February 2018 left off, with lots of clouds around. (Data via Iowa State University IEM)

So far in February of 2019, we’re averaging 85% of observations featuring overcast conditions. Typically in February, Houston averages about 45% of observations with overcast skies. Basically, with the exception of the time right around sunset, it’s been gloomy so far this month for the second year in a row. And this weekend will not help that cause.

Winter is back in force today. How far has the temperature fallen since this same time yesterday morning? 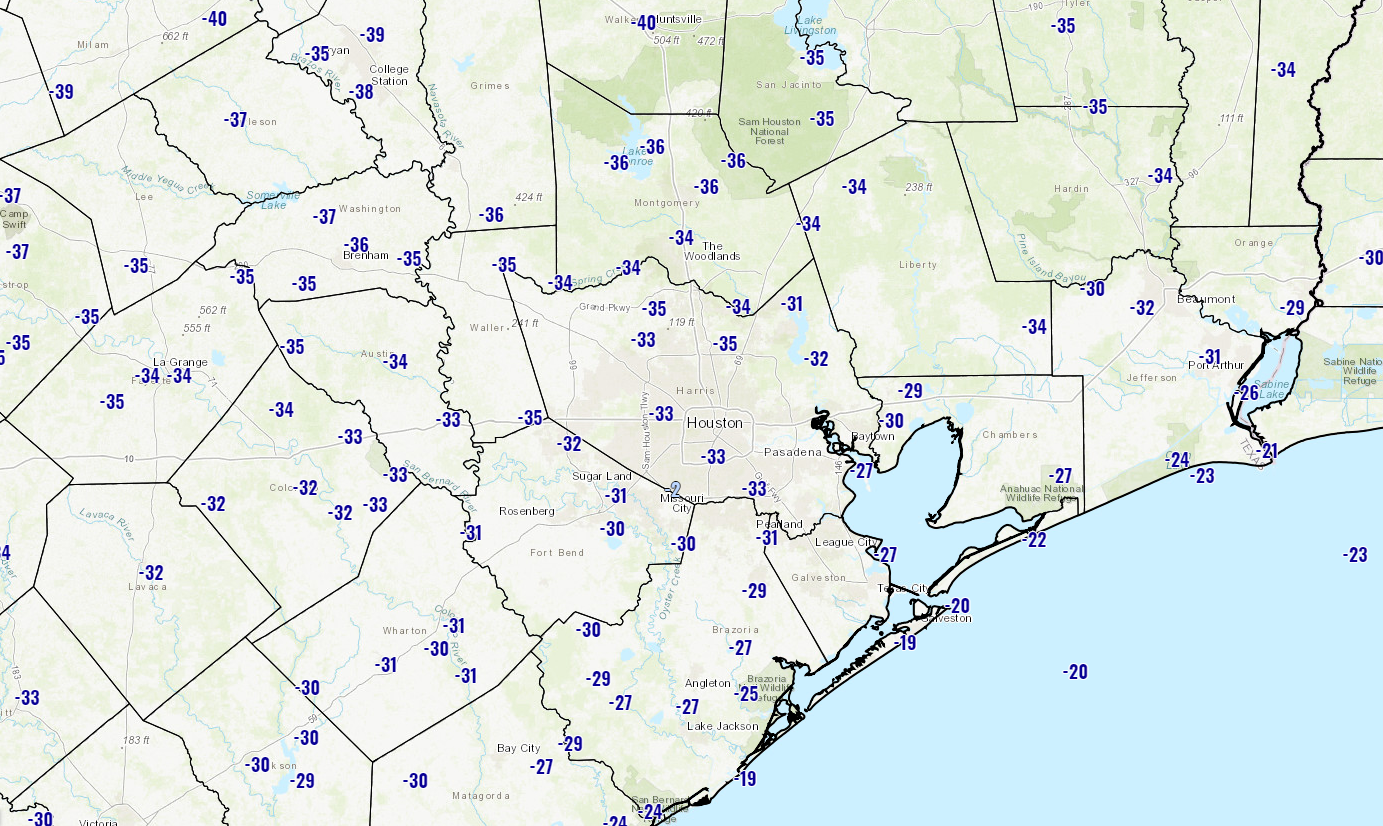 Temperatures are about 35° colder on average than they were this time yesterday across the Houston area. (NWS)

In Houston, we are running about 35 degrees colder than at this same time yesterday morning, starting today in the upper-30s or low-40s. Changes are a little greater north and a little less so south. Temperatures won’t move much today. Expect highs in the low-40s at best with a bit of a gusty north wind continuing.

Cloud cover will dominate today, with perhaps a few sunny breaks if we are lucky. In addition, we could see some sprinkles or light rain, especially along the immediate coast, as well as north of the Houston area, up toward Conroe or Huntsville. Up north, any of that light rain could mix with or even fall as ice pellets (sleet). It would be conversational, not impactful, but a good reminder of where we sit on the calendar.

Overall, the upcoming few days look dreary and cool, but the impacts on your weekend plans should be minimal. On Saturday, we’ll likely start with overcast skies and keep them most of the day. I would not rule out some sprinkles, light rain, or drizzle, in addition to a small shower chance. Any rain accumulation would be minor (0.10″ or less). Saturday will begin on a chilly note, in the mid- to upper-30s in Houston, cooler north and milder south. Clouds will hamper temperatures tomorrow, so don’t expect us to get much past the mid-40s during the day.

Temperatures will hold steady or rise on Saturday night as onshore flow revs back up. We will start Sunday in the upper-40s and end it in the mid-60s. I’m not optimistic for anything other than a few breaks of sunshine on Sunday. There will be a minor chance of showers once again, especially west of Houston and later in the day.

Onshore flow continues to increase Sunday and Sunday night. This may lead to the development of more fog along the coast and in Galveston Bay. Warm weather Monday will likely leave us with conditions similar to what we saw this past Tuesday and Wednesday. Expect clouds and fog in the morning, with some breaks of sun. Some scattered light showers can’t be ruled out Monday.

Our next front arrives on Tuesday, bringing with it slightly cooler and slightly drier air. It does not appear it will deliver as significant of a change as we saw behind yesterday’s front. It will also likely have a little more moisture with it, meaning better rain chances. There are still some questions around timing and how much rain this will have, but I would plan on showers and a chance of a few storms later Tuesday and Tuesday night. We may see some sun by Wednesday or Thursday, but the weather pattern continues to look unsettled with at least some clouds sticking around. More for you on this Monday.