It will feel more like a winter day today than a mid-autumn one as we struggle to get out of the 50s! Dress appropriately. Read on for details, as well as the latest thinking for Halloween.

The cold front is already through basically the entire Houston area as of early this morning. Temperatures are noticeably colder this morning. 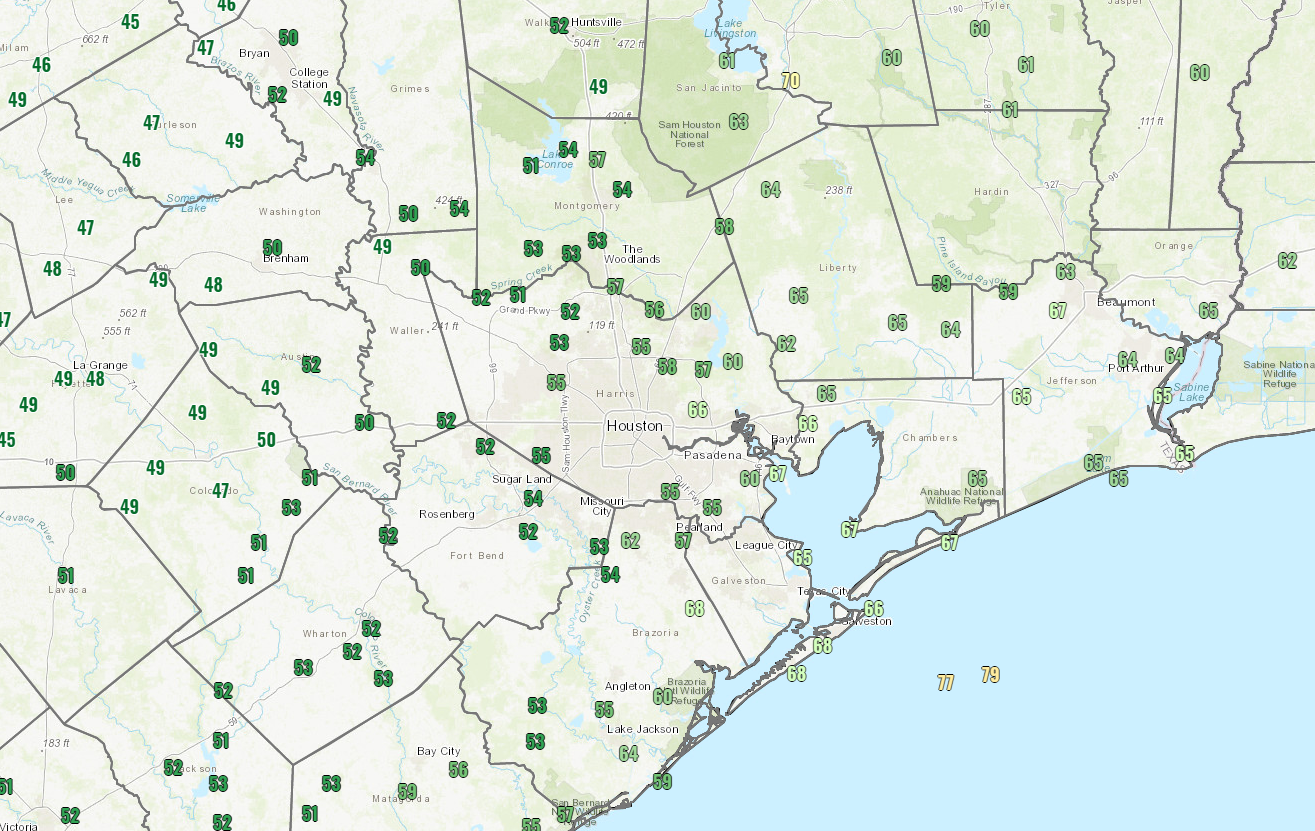 Temperatures were in the 50s over much of the area as of 5:30 AM Friday with the cold front approaching Beaumont. (NWS)

Most places have dropped into the 50s, and if they haven’t they will soon.

The heaviest rainfall is exiting Houston as I write this post. Look for continued clouds and showers or light rain through the afternoon, along with a good bit of cloud cover. There is a slight chance we do clear out in the afternoon, setting up a nice back half of the day, but right now we would lean toward clouds. Additional rainfall totals should be rather light. We did see some impressive rains overnight. 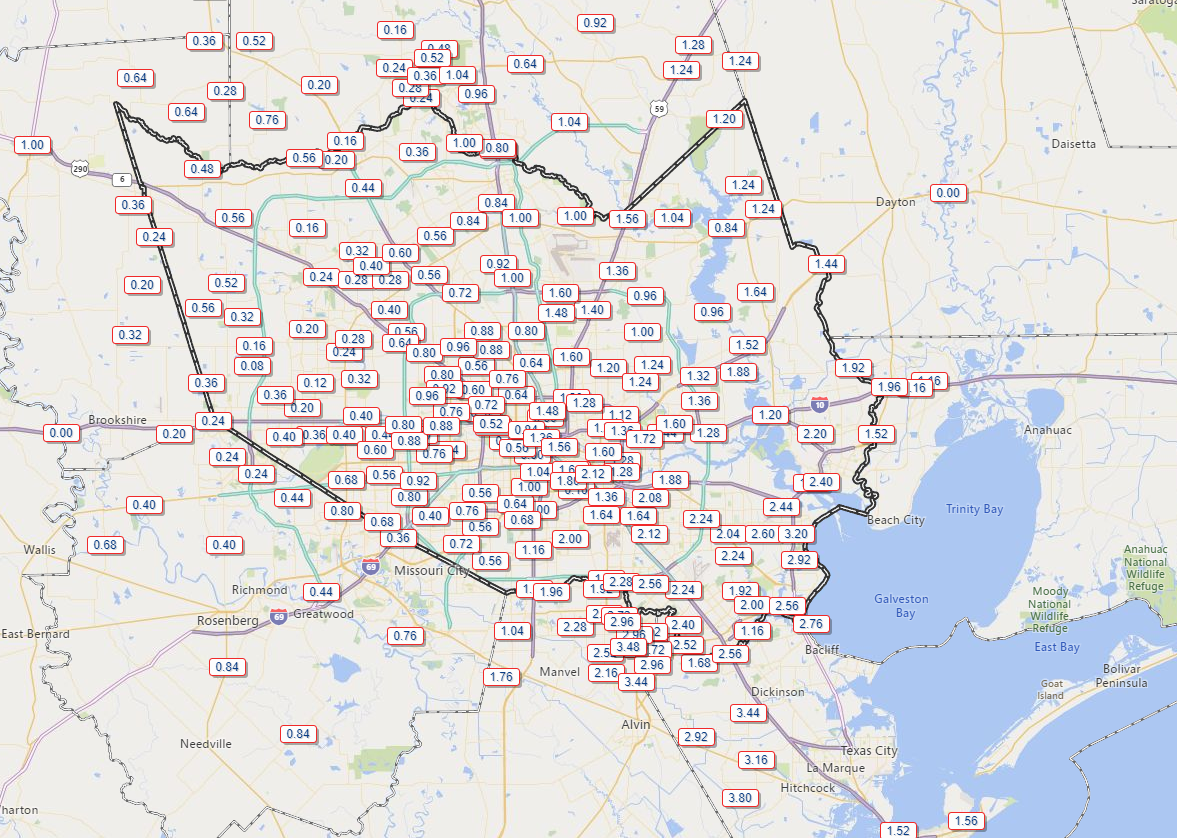 Rain totals as of 5:30 this morning are approaching 4 inches in some spots southeast of Houston. (Harris County Flood Control)

Unfortunately, the areas west of Houston that needed the rain most saw the least with a half-inch or less in most spots. As you move south or east of downtown Houston, rain totals increased. The area around Santa Fe seems to be the jackpot with close to 4 inches falling.

Temperatures should hold in the 50s for much of the day, maybe inching back up close to 60 degrees, especially west of Houston. Winds will continue gusty at times, generally up to 20 to 25 mph inland and 30 to 35 mph along the coast or bays. Higher gusts are possible in a few spots.

If there are still a few clouds Saturday morning, don’t be surprised, but I expect we will clear out rapidly and entirely by afternoon. Winds will gradually subside as well, and all in all Saturday should be a nice day. After a morning low near 50° or in the low-50s, we should warm to the middle or upper-60s.

Another fine day is in store on Sunday. We will start off in the 50s (near 60 along the coast) and warm into the 70s on Sunday afternoon. Look for oodles of sunshine, really a sublime day.

Monday seems straightforward. The winds turn back onshore, and slowly warming temperatures and increasing humidity are likely. Look for lots of sunshine and temperatures warming from the upper-50s or low-60s into the mid- to upper-70s.

From Tuesday onward, forecast confidence plunges again. Yesterday, it appeared we would have a cold front plow through here later Wednesday, leading to a cold, dry Halloween on Thursday. 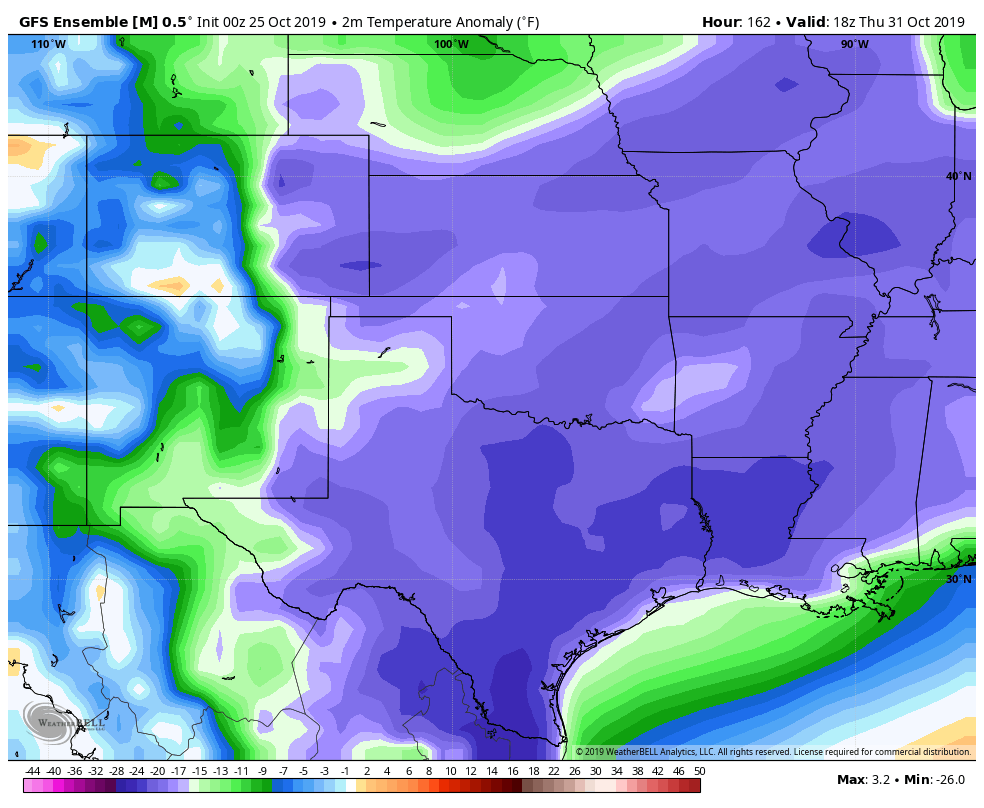 GFS ensemble mean forecast of temperature anomalies next Thursday afternoon shows a pretty healthy plunge of colder air is likely, with some 15 to 20+ degree below average temperatures possible. (Weather Bell)

Well, the models are bouncing around on the details, with newer data pointing toward a somewhat slower cold front. This would mean the potential for showers to carry over into a portion of Thursday. Let’s break it down like this:

We think Tuesday will see at least isolated showers and storms develop. There are huge differences between models today for Tuesday’s forecast, with a literally dry GFS and the Euro saying scattered storms. We need a couple more days to sort this out.

We also think Wednesday stands a good chance to be a wet day, with at least some showers or storms around so you’ll probably be enjoying your free Doritos Locos taco or a Toasted Cheddar Chalupa somewhere indoors. The cold front should move through at some point between Wednesday morning and Thursday morning it would appear.

As for the all important Halloween forecast: Despite the slower front, it looks like most of the rain would end by afternoon, even in the most pessimistic scenario. But since we are not 100% certain how this is going to go, I would say a 65-percent chance of a dry, cool or cold Halloween evening and a 35-percent chance of a cool to mild (not hot) one, with at least some slight rain chance. I hope that we will be able to narrow this down a bit further on Monday.

As long as everything stays close to where it is now, we should see a cool Halloween night with temperatures dropping from the 50s in the evening into the 40s overnight. Some modeling implies risk of 30s by Friday morning, but we would not be too confident in that just yet.

As the Astros look to bounce back in Washington, we are watching some weather issues. I invite you to read the local experts at Capital Weather Gang. The 50,000 foot view is: Nice weather tonight, probably no issues Saturday though rain could be nearby, and rain ending Sunday afternoon but a close call for game 5, should it be needed. Hopefully we can bring it back to cozy confines of Minute Maid Park!

8 thoughts on “Friday front through Houston area, a chilly day, a stellar weekend”