Houston’s forecast remains largely unchanged. As with some previous mornings, calm winds and cooler grounds will lead to the development of some radiation fog this morning and likely through the weekend. A front remains several days off.

With high pressure off to the west and easterly winds, we’ll continue to see warm but not unpleasant days with highs in the mid 80s, and nighttime temperatures in the 60s (down near 60 degrees north of Houston, and upper 60s along the coast). Skies will remain mostly sunny.

High pressure moves closer to the Houston region, so we may see temperatures tick up a degree or two, but I’d still anticipate highs in the mid-80s for the most part with lows in the 60s.

We’ll start to see more moisture moving into the Houston area on Monday, and this could lead to the development of a few scattered showers later during the day. I wouldn’t worry about anything too disruptive for trick-or-treating, however. Highs, again, in the mid-80s. Temperatures during the trick-or-treating hour will likely be in the mid- to upper-70s. 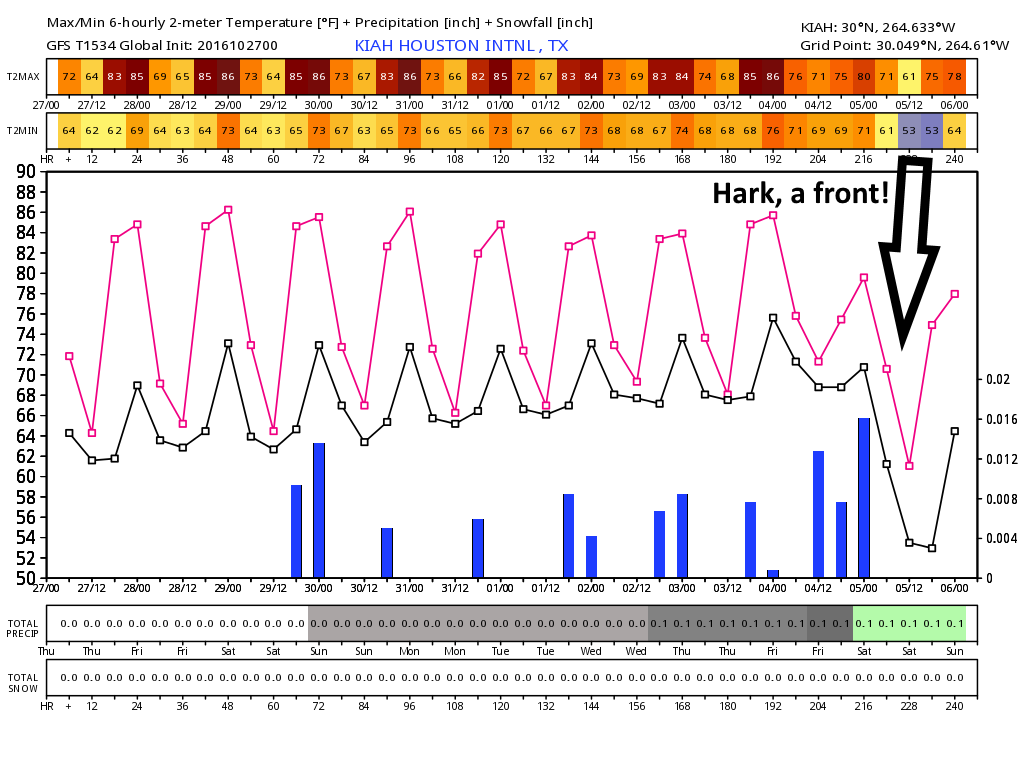 Better rain chances look to arrive on Tuesday or Wednesday of next week, with much of the Houston area seeing perhaps 0.5 to 1 inch of rain during the middle of the week. Increased cloudiness should limit high temperatures to about 80 degrees, and nudge overnight lows up a bit.

I’m happy to report that both the GFS and the European model are both now in general agreement that our next cool front will probably arrive sometime between late Thursday and Saturday of next week. That’s still fairly fair away, but since both models are on to it, we can at least have moderate confidence. And won’t we all be ready for that?

Posted at 6:40am CT on Thursday by Eric