Here’s a sobering statistic as we get deeper into September: Houston’s streak of “warm” nights is unprecedented. According to MDA Weather Services, the city’s run of nights 72 degrees, or warmer, is unprecedented in the period since 1889. It has now extended to 101 days (102 if we include Tuesday). In other words, we haven’t been below 72 degrees since June 10: 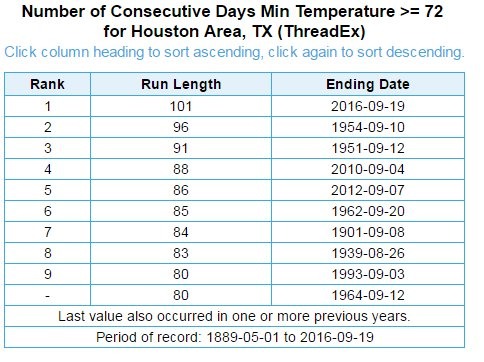 Unfortunately we are likely to extend this dreadful record for at least a few more days. However, there is still some modest hope of a cool front next week.

With slightly drier air moving into the region we should see a mostly sunny day today, with highs in the low 90s, and lows in the mid-70s. Rain chances are near zero.

The onshore flow resumes tonight, which should push humidity levels back up and return a chance of rain back into the forecast by Thursday. We should see a couple of partly to mostly sunny days to end the week, with highs around 90 degrees or slightly above. Scattered, strong thunderstorm development will be possible, especially during the afternoon hours. I’m not expecting anything scattered or too widespread, however.

The weather seems likely to be unsettled during the weekend, with ample moisture and the potential for some atmospheric disturbances to move into the region. 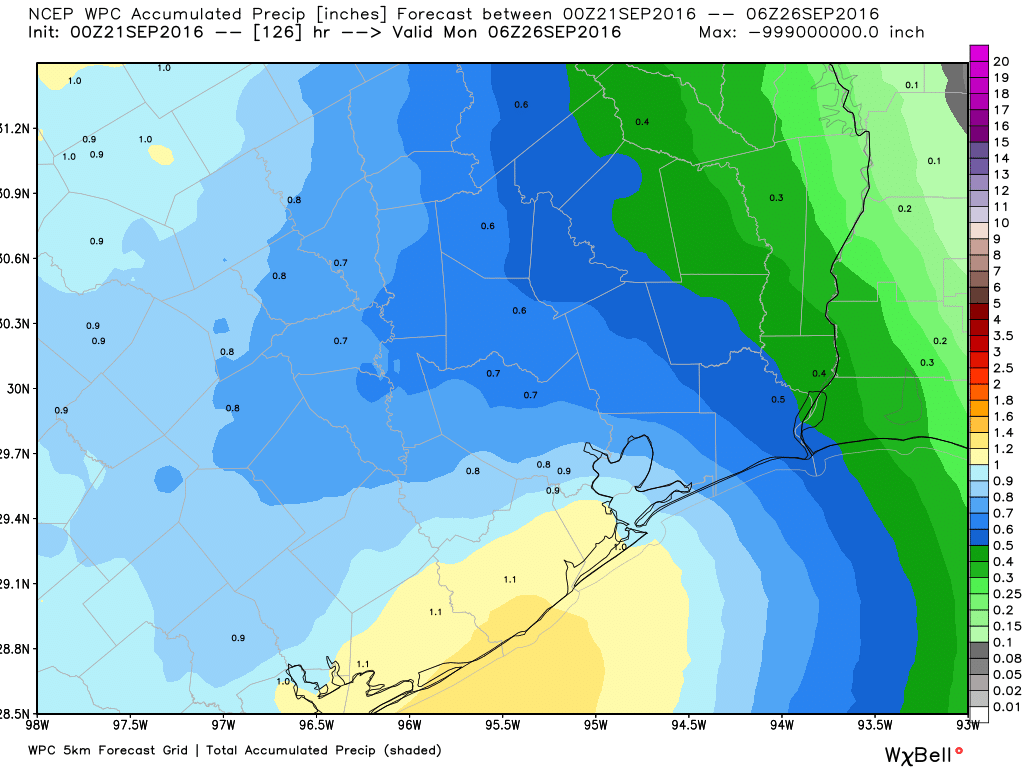 It looks like about half of the region will see some rain on both weekend days, with accumulations of 1 to 2 inches possible where storms establish themselves. This will certainly put a damper on outdoor activities, but the storms will pass. Highs likely in the upper 80s.

Excitement is building about the possibility of a cool front that I mentioned Tuesday, with forecast models suggesting a slow-moving front will slog through Texas on this coming Monday and reach the Houston area around Tuesday or so. The BIG question is whether the front actually makes it all the way through Houston. The European model has remained pretty consistent by bringing the front just through Houston and off the coast, and this morning the GFS has joined it. IF this happens we’re looking at a few nights with lows in the low 60s, or so. But this is no sure thing—I’m concerned because the front likely won’t have that much oomph behind it as it moves through Texas— so it is fairly easy to envision a scenario in which the front washes out somewhere between Austin and Houston. Therefore we watch. We wait. But we don’t count our chickens yet.

Expect some storminess ahead of the front regardless.