Good morning. If you thought Wednesday was warm, you are correct. According to records kept by the National Weather Service, all four of the region’s major data recording sites set heat records for both daytime highs and nighttime minimums. The entire area, with the exception of the immediate coast, also saw its first 80-degree day of the year. 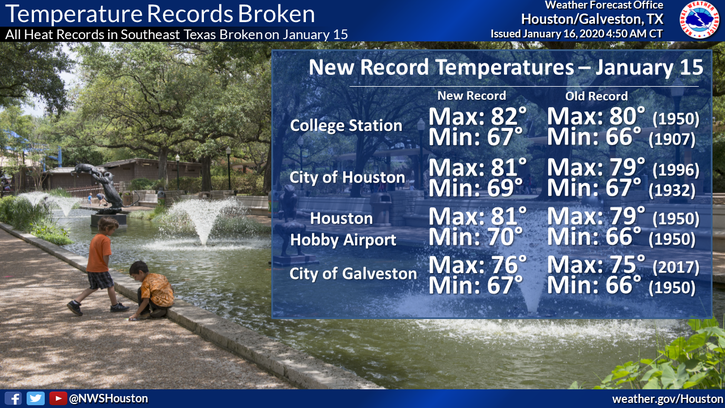 In addition to the anomalous warmth, the story this morning is the continuation of widespread, dense fog. After the fog clears later this morning, we’ll be left with a cloudy, warm day with high temperatures in the mid-70s. That weak front is still coming, and still going to dissipate somewhere along a line from the northern part of Montgomery County to Beaumont, so most of Houston is unlikely to see any effect except for some scattered showers—mostly north of Interstate 10. Lows tonight will be a bit cooler, dropping down into the mid-60s for most of the area.

More of the same. After the fog lifts, look for mostly cloudy weather with perhaps a 20 percent chance of light showers and highs in the 70s. And so ends the grayest, muggiest work week so far of 2020. Let’s hope it retains the title for awhile.

This first day of the weekend will start similarly to Friday, and high temperatures will likely climb into the mid-70s. However, during the afternoon and early evening hours a fairly strong cold front should sweep through the region to clear us out. It now appears as though a broken line of showers will accompany the front, bringing perhaps 0.25 to 0.5 inch of rain to some areas on Saturday during the day time. Skies will remain cloudy, with a slight chance of rain lingering into the overnight hours. 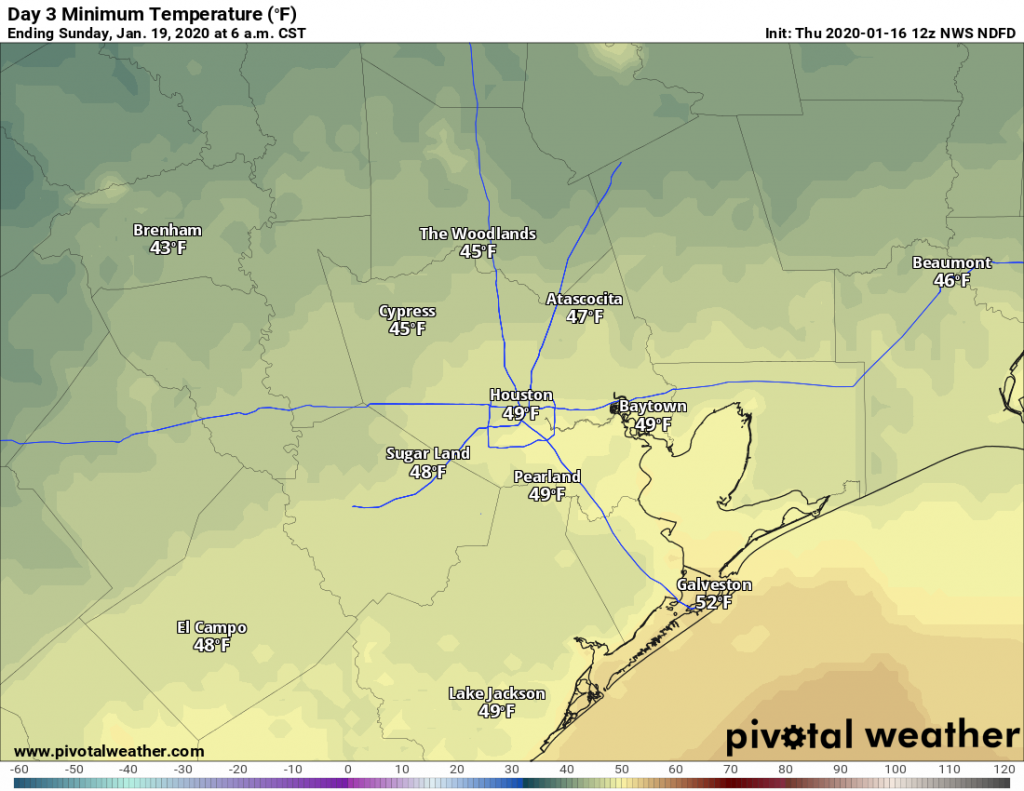 For most of Houston, low temperatures should bottom out around 50 degrees on Sunday morning (a few degrees cooler inland, a few degrees warmer along the coast). For the Houston Marathon, highs on Sunday are unlikely to rise much above the mid-50s, with cool air moving in on a northerly breeze at 10 to 15mph. The biggest change in the forecast is that skies may no longer clear as fast as expected, so the race hours may see partly to mostly cloudy skies. I’m still not 100 percent confident in this.

Weather for next Monday should be partly sunny and cool. Lows during the morning will bottom out at around 40 degrees, with partly sunny skies and highs rising into the mid-50s. Not bad parade weather at all!

The rest of next week

Through about Wednesday or so of next week, we should see continued chilly weather, with highs in the 50s and lows in the 40s. (Sorry kids, models have backed off any chance of snow). There are some hints about the potential for 1-2 inches of rain in the Thursday time frame that we’ll watch for you.