After a great, fall-like weekend Houston will slide back into a warmer—although not oppressively so—weather pattern this week.

A small atmospheric disturbance will move from the I-35 corridor in Texas eastward through Houston later today. Were the atmosphere not so dry we might see some widespread showers, but as it is, while a few stray showers may pop up for the most part we’re going to see some clouds.

With that said, moisture levels will rise today after last week’s cool front, and humidity levels will continue to deepen after a spectacular weekend. Expect high temperatures in the low 80s, with lows in the mid-60s.

For the rest of the week our weather really should be quite boring. High pressure will settle into the region and should bring us partly to mostly sunny skies. We’ll have what I’m going to call Goldilocks weather, which means not too hot, not too cold, with some humidity. Highs will be in the 80s, with low 80s closer to the coast, and upper 80s for far western parts of the region; and lows in the lower 60s for far inland areas to around 70 degrees right along the coast. 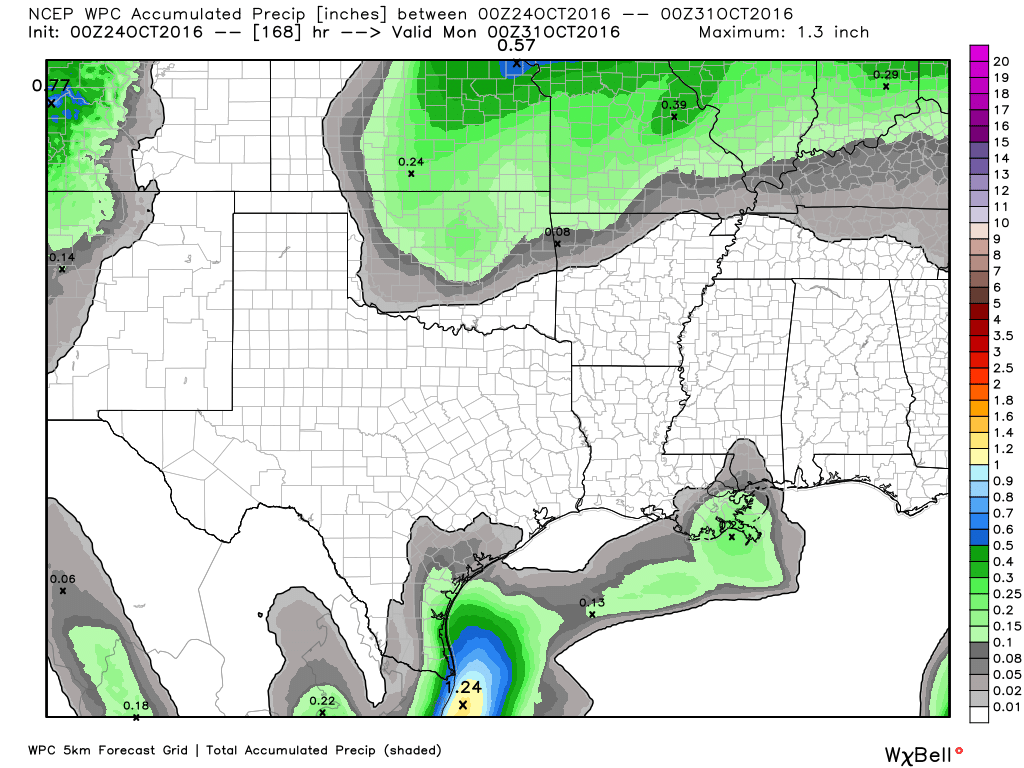 Here’s your rain accumulation forecast for now through next weekend. (Weather Bell)

Rain chances appear to be near zero. Basically, days will be a bit warm, but nights and mornings should be pleasant enough, especially for inland areas.

This could certainly change, but right now there don’t appear to be any particularly strong forcings to alter this pattern for the weekend. So I’ll call for continued mostly sunny days, with highs in the 80s and lows in the 60s.

If this forecast holds expect temperatures in the mid-70s during trick-or-treating time on Halloween, with only a very low chance of rain.

Most areas in Houston are about five to seven inches of rain below normal, in terms of accumulation, since September 1. Unfortunately for our area’s greenery, this dry pattern looks unlikely to change before the end of the month. Longer range patterns suggest a drier than normal winter, as well.

Posted at 6:35am CT on Monday by Eric

3 thoughts on “Goldilocks weather ahead for Houston, but no real rain or fronts”