I filled in for Eric all of last week, which feels like it was 25 years ago at this point. Between the profound changes to our daily lives and the lack of virtually any day to day change in our weather since then, it certainly has felt like a warmer version of “Groundhog Day.” Alas! As Eric has been discussing all week, changes are on the way. They begin today. And they continue next week. Break out the shorts. I explain below.

Rain is falling this morning basically on a line from Columbus in the west to Conroe in the north. Some areas just west of The Woodlands have picked up close to an inch of rain so far today. We’re also watching a batch of storms between San Antonio and Victoria that will try and work across parts of the area this morning.

I think a good rule of thumb for the Houston area this morning: Rain will be most likely north or west of US-59. As we go through the morning and into this afternoon, rain will continue to creep south and east but a lot of the support for heavier rain and storms should sneak off to our east. This means while many of us will see some rain today, it will become less concentrated, more scattered, and less significant as we go into this afternoon, even with the front approaching. 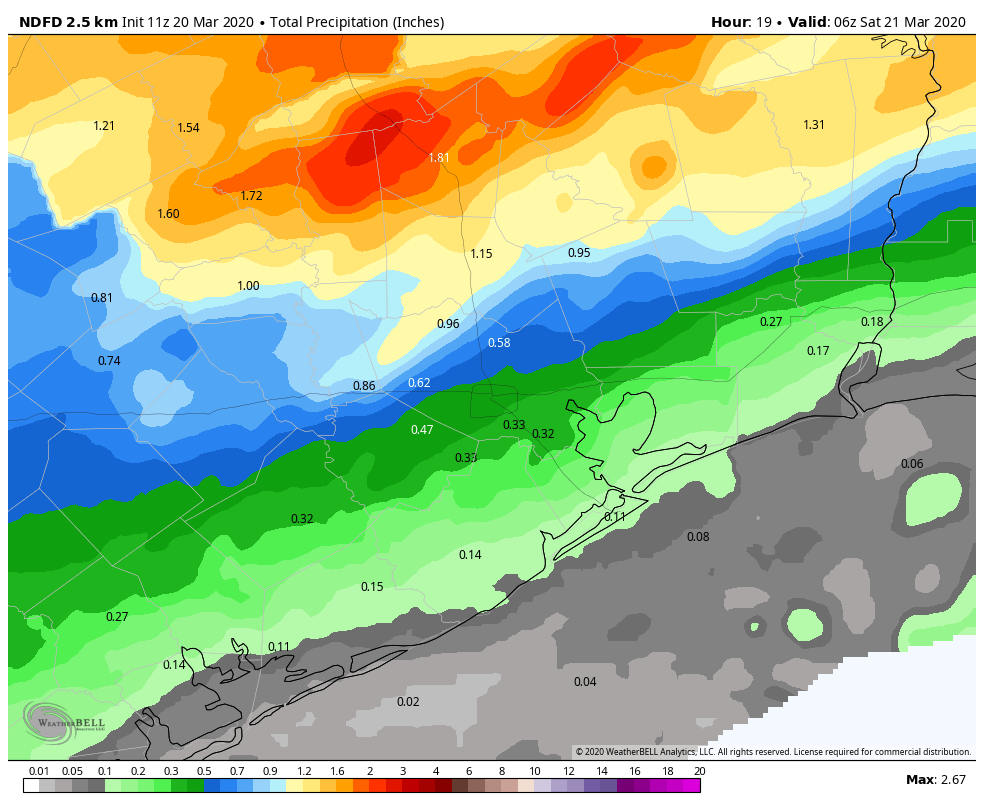 Total rainfall through midnight will range from 1-2″ or more in far northern reaches of our area to maybe a quarter-inch near the coast. (Weather Bell)

Outside of minor street flooding issues north of the Houston area where the heaviest rain falls, we do not anticipate any real flooding problems today.

Timing-wise: The shift to offshore winds should move through northern and western suburbs soon and before midday. It should pass Downtown Houston around early afternoon and reach the coast by late afternoon. Once the front (or pre-frontal trough) passes, we’ll see temperatures stop rising. So that means there will be a wide disparity in temperatures today. We’ll drop from the 70s into the 60s in far northwest suburbs. For Houston and points south and east, we should get close to 80 or warmer again before the front clears the area and drops us into the 60s and low-70s.

Temperatures will continue to drift downward tonight, dropping into the 50s just about everywhere except coastal counties. Houston proper will bottom out near 60 degrees. Look for a few showers tonight, likely coming to an end.

The morning should just be mostly cloudy but dry for most folks. If you’ve been trying to get outside for an hour or two each day, I would strongly recommend the morning, especially north of Houston. Showers could develop in the morning south of Houston. Look for temperatures to only slowly warm from the 50s or low-60s into the mid- to upper-60s.

Things change again Saturday afternoon. Today’s cold front is coming back north tomorrow as a warm front. Look for a burst of showers or thunderstorms as this passes by from south to north. The heaviest rain may initially be in the Houston area, but as the warm front progresses north, watch for that to quickly shift back into northern counties, so places like the Brazos Valley, Conroe, or Cleveland will see heavier rain chances again late Saturday afternoon into Saturday evening. All the heavier rain should lift even north of there overnight Saturday into Sunday morning.

Rain totals should be around a quarter-inch or less in Houston and points south again. We could see a half-inch to inch or a bit more in northern counties again.

The worst of the rain should continue lifting north and well out of the area Sunday morning. During the day, there will be chances of a shower or a thunderstorm, but I think those might be sporadic or isolated enough that most people won’t see much rain after Saturday night. Temperatures will warm from the 60s into the mid-70s at least on Sunday. We could even see upper-70s to near 80 if we get any sun during the afternoon.

Houston will begin to settle down next week. On Monday, we could see a few showers again but for the most part it should be partly sunny with temperatures in the 70s to near 80 degrees again. After that, it’s off to the races.

Most of next week looks like something more normal for May than March. Each day from Tuesday through Thursday will be a couple degrees warmer than the previous day. Look for low- to mid-80s Tuesday, mid- to upper-80s Wednesday, and warmer than that Thursday. Many locations will likely be seeing their first 90 degree days of the year on Wednesday or Thursday. 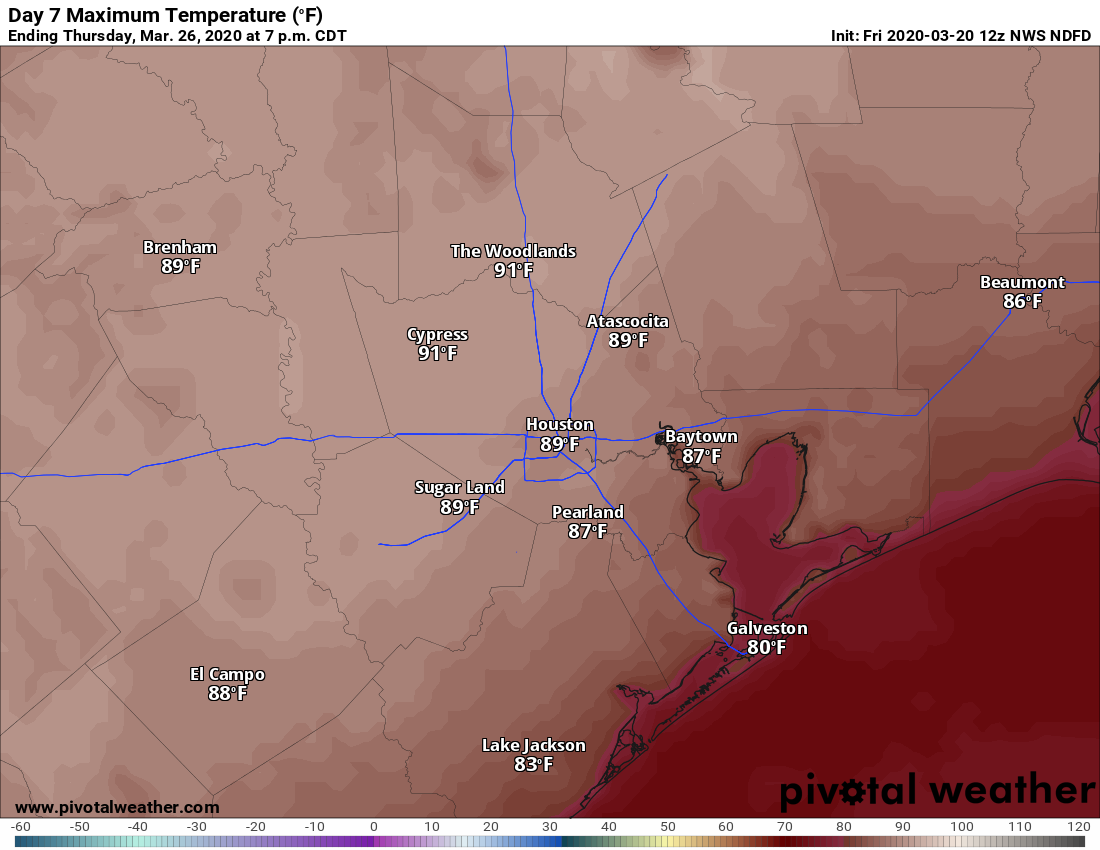 When is our earliest official 90 degree day you ask? Well, much earlier than next week would be. That honor belongs to February 20, 1986 when Houston hit 91°. Last year, we had to wait until April 9th. What’s normal? May 7th has historically been the average for Houston’s first 90° temperature. Either way, it feels too early to be talking about this, but here we are.

Rain chances next week look nil. Our next front? Maybe — maybe next weekend. More on that for you Monday.

15 thoughts on “Houston’s weather change this weekend will be short-lived: A summer preview is coming”