6:20 am CT Friday: Hurricane Delta has completed its north turn and is now steaming toward the Louisiana coast. Delta is a large storm in size, and as a result, we are seeing some rain here in the Houston area, especially on the east side. But Delta will exit quickly tonight, setting the stage for a sunny weekend but also the return of heat.

As of the 4 am CT advisory, Hurricane Delta still had 120 mph maximum sustained winds, supported by observations from aircraft investigating the storm. Since that advisory, little has changed for the most part, but Delta is now moving into an area of high shear and cooler water temperatures. 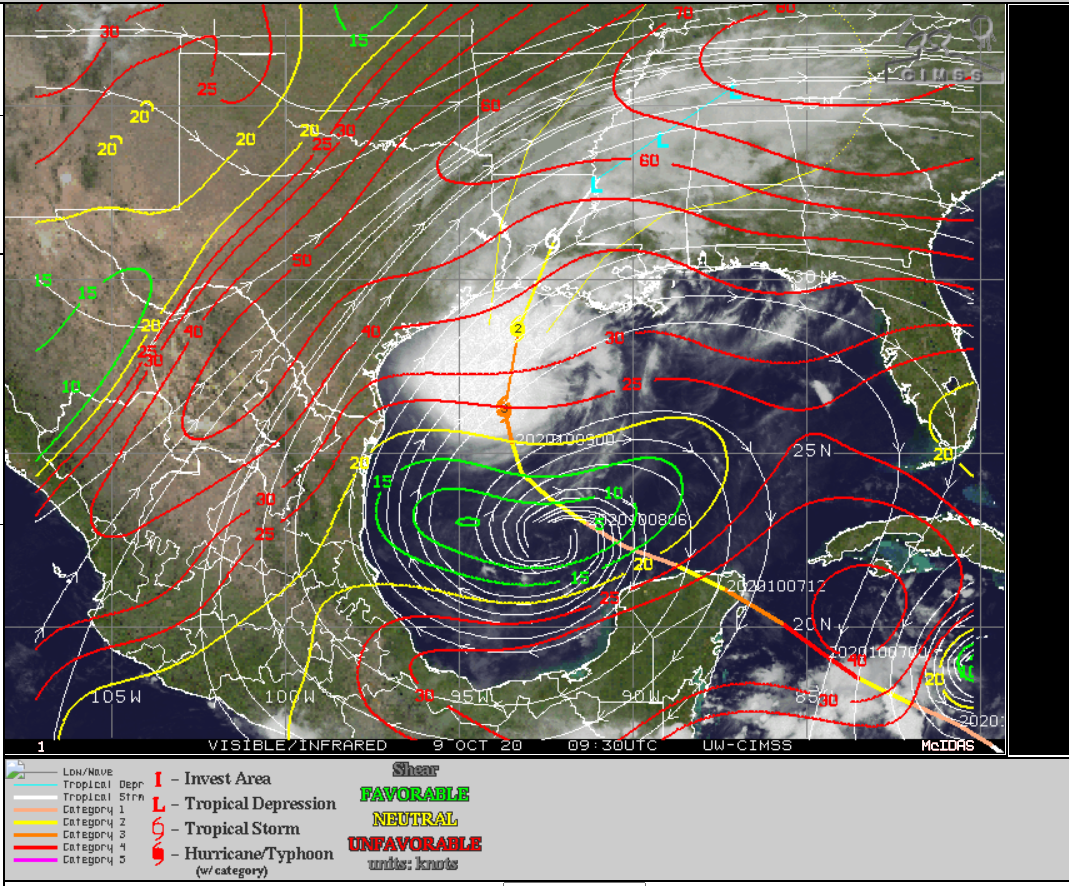 Hurricane Delta is moving into a much more hostile environment for a hurricane, with substantial wind shear (indicated by the red contours on this map), cooler water temperatures, and likely some dry air as well. (University of Wisconsin CIMSS/SSEC)

In addition, the southern side of the storm is beginning to feel the effects of drier air being swept off Texas and Mexico in the wake of its passage. The GFS model image below is valid for Noon today and shows drier air (brown) getting dragged into the southern half of the storm. Delta is likely to come ashore fairly lopsided, with a potent northern half and a much more frazzled and weaker southern half. 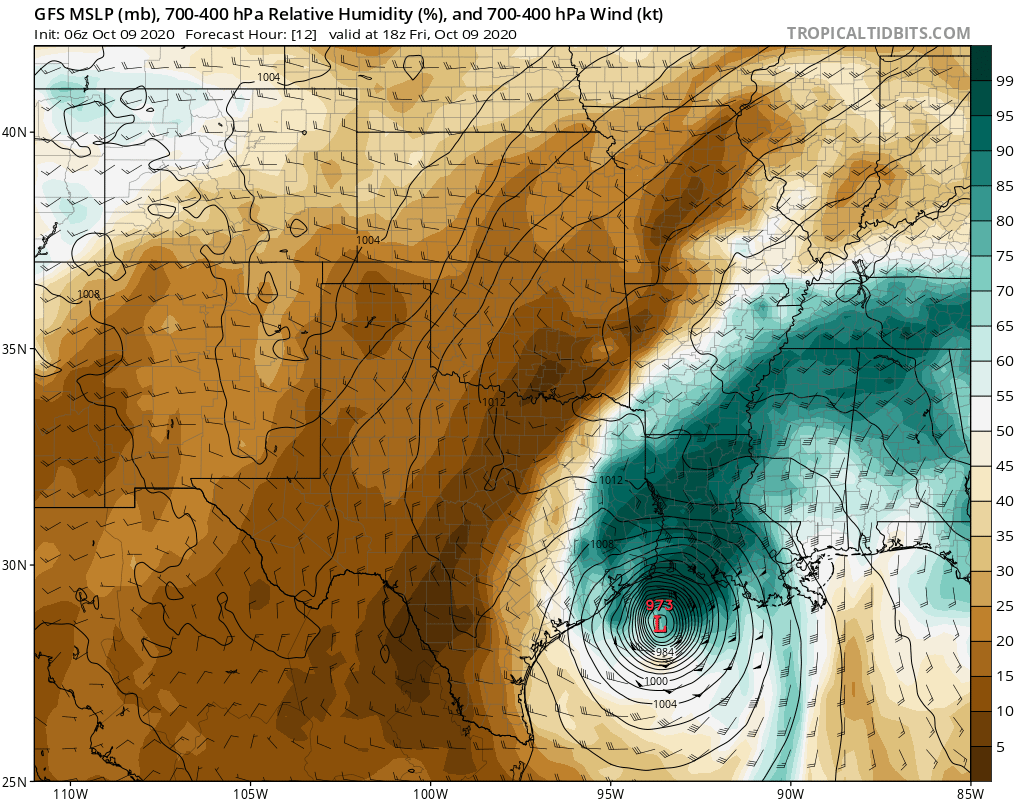 Dry air will also help to begin to weaken Delta as it wraps into the southern half of the storm through the day today. (Tropical Tidbits)

So this storm has likely peaked in intensity over the Gulf and will slowly weaken up to landfall. That said, it remains a dangerous storm, as the large size of it will allow for a storm surge in Louisiana that is more significant than the storm’s landfall intensity will probably suggest. In addition, the expansive tropical storm force wind field (which now has a radius of 160 miles north and east of the center) will allow for damaging winds in weakened, vulnerable parts of Louisiana. So for southwest Louisiana, this remains a serious storm.

We have already begun to see tides increase on the Upper Texas coast. San Luis Pass is just on the cusp of minor flooding this morning. 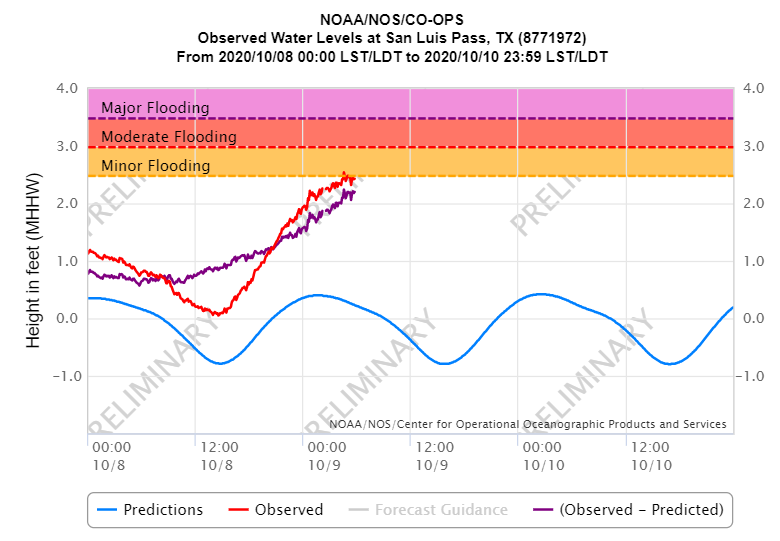 San Luis Pass is just on the edge of minor flooding as of this morning’s high tide. (NOAA)

We are now past high tide, so this will likely level off now or perhaps rise just a little more. A similar story is playing out in Galveston. Tidal levels on our slice of the Texas coast will probably be similar to what we saw with Hanna and Laura and lower than what was experienced with Beta. Watch for the risk of some minor flooding from the Galveston Bay side in Bolivar and Galveston itself later today with winds shifting behind Delta.

Rain continues to circulate in from the east, and most of the eastern half of the Houston metro has seen about a quarter-inch so far.

Rain will continue to pivot through the area during the course of the day. No flooding is expected in the Houston area. (College of DuPage)

Total rainfall in the Houston area should be under an inch for most folks, and no flooding is expected in our area. Look for upwards of 2 to 4 inches in the Golden Triangle, with minimal flooding issues expected and 6 to 8 inches in Lake Charles, where street flooding could be a bit more serious of a problem.

Winds at Galveston are gusting just a bit under tropical storm force this morning (35 mph as of 6 AM). We could see sustained winds or gusts to tropical storm force (45 mph or so) along the immediate Gulf coast. In Houston, wind gusts will be unlikely to get much past 25 or 30 mph, and no serious issues are expected due to wind for the vast majority of the region. Winds in the Beaumont area could gust to 40 to 50 mph, with slightly higher winds closer to the coast. In Lake Charles,  winds could gust as high as 50 to 70 mph for a time later today, with hurricane conditions on the immediate coast of southwest Louisiana, in addition to a significant storm surge on the immediate Gulf coast there.

Eric and I continue to send our thoughts and best wishes to our neighbors in the east. Even a best case scenario outcome with Delta is still a pretty bad day for southwest Louisiana, and they will continue to need our help in recovery.

With Delta moving off to the north tonight and tomorrow, the Houston area is going to clear out quickly in its wake. Saturday should be a lovely day, albeit a bit warm. Expect sunshine with highs in the upper-80s. Humidity should be tolerable. More sunshine will follow Sunday, but temperatures are going to crank up and so will the humidity. Sunday is going to feel like a summer day, with highs in the low to mid-90s. 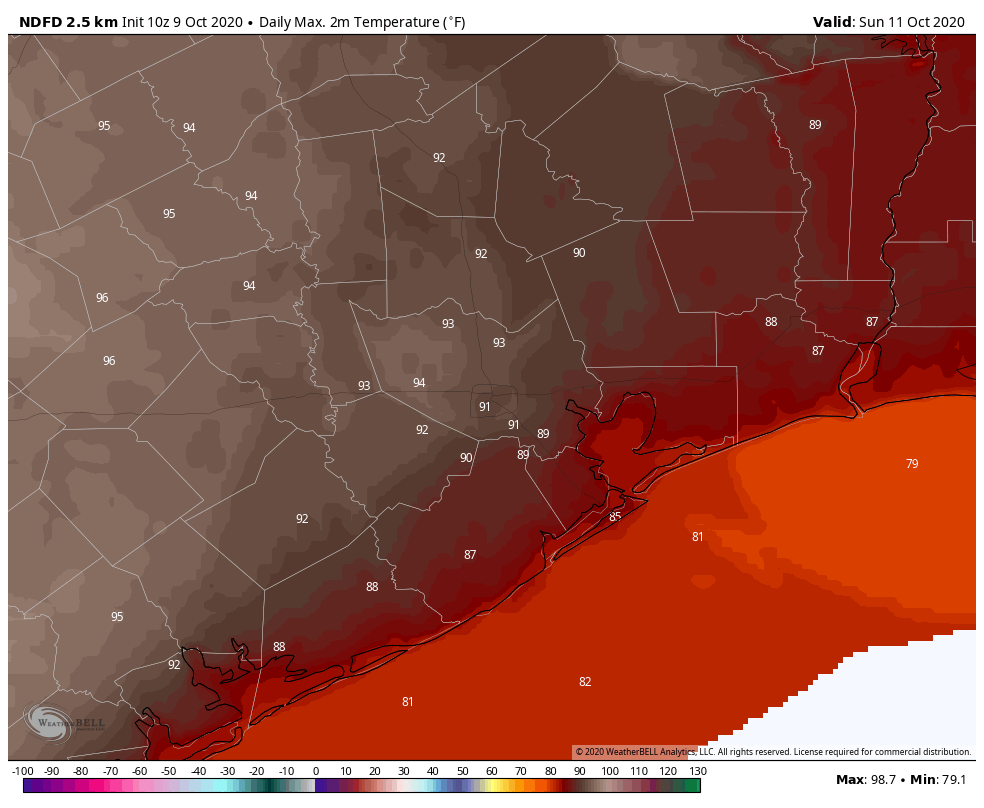 Sunday will feel like early September, with highs in the low to mid-90s and fairly uncomfortable humidity. (NWS forecast via Weather Bell)

For the holiday on Monday, expect more of the same, with at least low-90s and sunshine.

A cold front is likely to press into the area later on Monday, but how far south it gets is an open question. While a few showers will be possible, we expect this wash out over us, which should lead to a slight cooldown in temperatures and slightly lower humidity. By the end of the week, we may see a more robust cold front enter the picture, driving in more pleasant weather for next weekend, but even that is not a guarantee at this point. More on this for you on Monday.

Our next update on Delta will be posted by 2:30 pm CT today.

9 thoughts on “Hurricane Delta heads for Louisiana, and then the heat returns to Houston”