Houston’s high temperature peaked at 85 degrees on Halloween, but our run of very warm (for late fall) weather will soon come to an end—by this weekend. And after this week I think we can look for most days to only reach the 70s as we get deeper into November.

But the warm, muggy air is not ready to go yet. With air now flowing off the Gulf of Mexico and into the Houston area today, expect the next few days to see mostly cloudy skies, with highs in the low- to mid-80s, and some scattered showers. Rain chances will be greatest today the southwest of Houston, closer to Matagorda Bay, where moisture levels should be highest. More widespread rain is possible on Thursday across the Houston area as some instability moves in along with an approaching front. But I don’t think we’re going to see significant accumulations of more than a tenth of an inch of rain, or two. Nights won’t see much cool down through Thursday, with temperatures only falling to around 70 degrees for most areas.

After a cool front limps into Houston later on Thursday, the region should being seeing some drier air on Friday, which will set us up for a pretty nice weekend. Under mostly sunny skies we should see a high of around 80 degrees, with a low of 60. 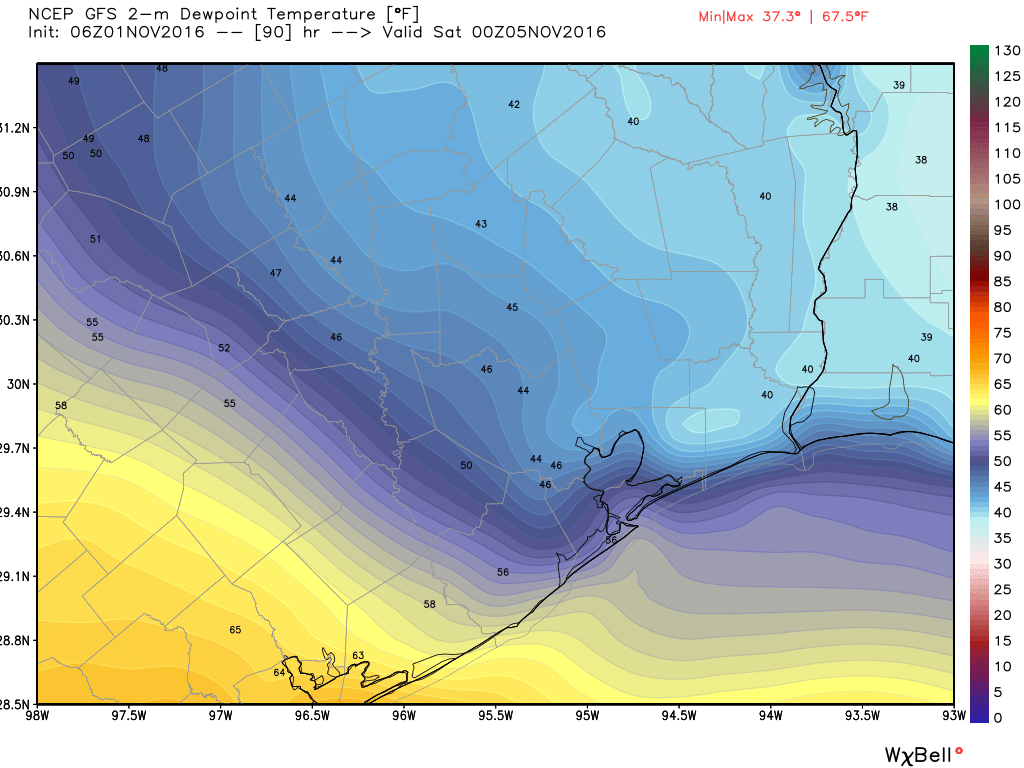 Although a cool front should arrive late Thursday, much drier air (noted by dewpoints) is unlikely to move in before Friday afternoon. (Weather Bell)

Saturday will be the banner day for the weekend, with a high temperatures likely only reaching into the upper 70s, and low humidity. It should be the perfect day for football, outdoor yard work, a hike—or whatever activity you choose.

Sunday will also start out nice with a low around 60 degrees. However it now appears as though moisture will begin returning from the Gulf of Mexico later on Sunday, so humidity levels could rise a bit, and we can’t rule out some rain later on Sunday or Sunday night.

As moisture levels return we may see some upper-level storm systems move into Houston and bring some more widespread showers and thunderstorms during Monday through Wednesday of next week, with highs in the 70s. This should be our best shot at significant rainfall since August.

It also seems to me that by around Nov. 10, give or take a few days, or so we’re going to flip a switch and go into much cooler weather for the rest of November, with temperatures closer highs in the 60s and lows in the 40s or 50s. We may well be asking, “Where’s warm weather?!?”

Posted at 6:30am CT on Tuesday by Eric