We’ll be starting off the Christmas period with a bang today and tomorrow before some clouds build in for the holiday, followed by a potentially active period of weather later next week. Let’s dive into the details.

As we officially begin winter at 4:23 PM today, the season kicks off on a beautiful note. We had lots of wind yesterday, but most of that is gone now, and we’ll see sunshine with mid-60s this afternoon. A cool, crisp night in the low- to mid-40s will follow tonight. Look for essentially a repeat of Friday on Saturday, along with several degrees of added temperature. We’ll do mid-70s on Saturday under sunny skies. 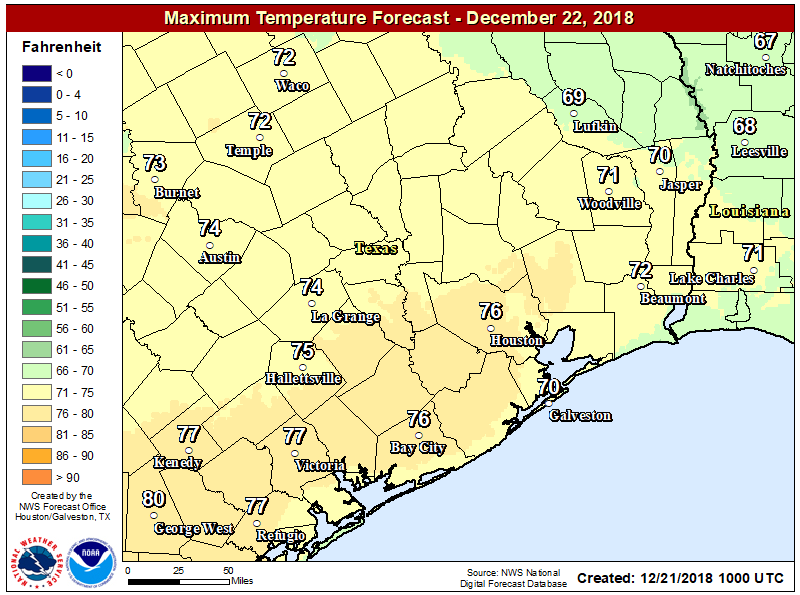 It may be a bit warm for December, but it will really be a nice day Saturday. (NWS Houston)

It should be a stunner.

A weak cold front will approach the area on Sunday morning and afternoon. After starting the day in the milder mid-50s, we should see our afternoon capped in the mid- or upper-60s. Sunday will probably have a few more clouds at times, though I think we will still see majority sunshine. A stray shower can’t be ruled out with the front, but most folks should stay dry. Some patchy fog is possible around Galveston Bay or on Galveston Island Sunday morning.

We’ll cool back off on Monday morning, with lows in the mid- to upper-40s. We should have a fair amount of cloud cover around on Monday afternoon, though I do expect at least a little sunshine. We’ll probably warm up into the mid-60s on Monday afternoon with enough sunshine. An isolated sprinkle or shower is possible, but most areas should remain dry.

There will be at least a slight chance of a shower on Christmas. But for the most part it looks mostly cloudy and mild. Monday night won’t see temperatures go very far, and we likely won’t drop below the upper-50s or even low-60s on Tuesday morning. Santa may have to change into shorts while passing through here. 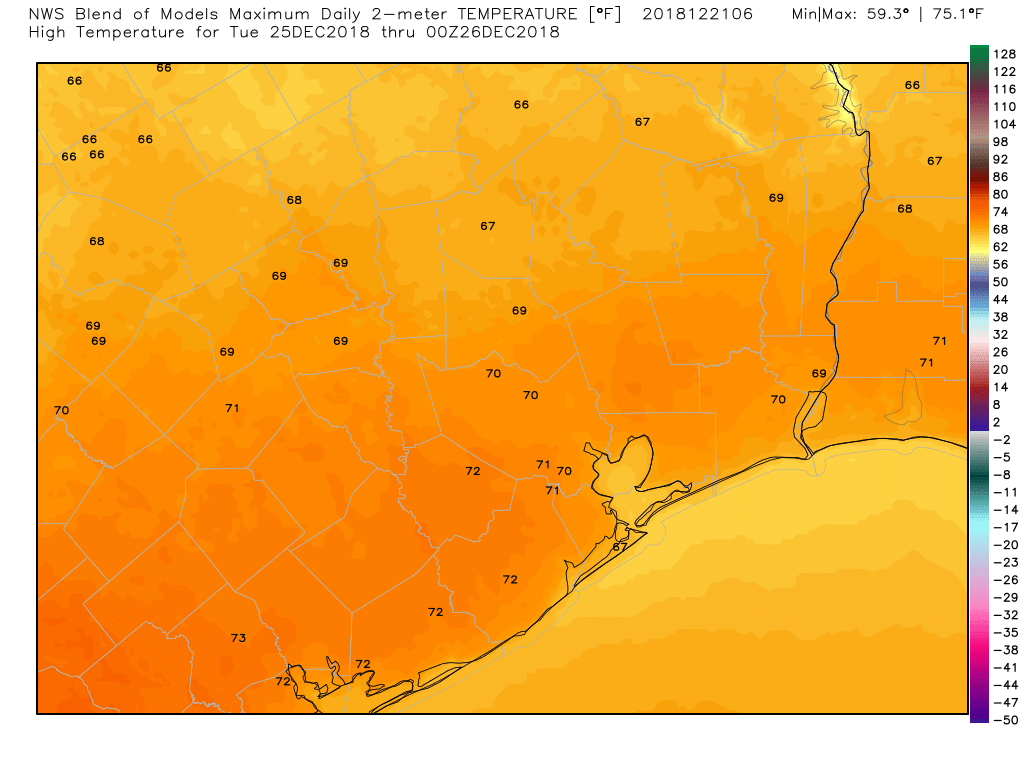 The NWS National Blend of Models shows high temperatures at 70° or warmer for Christmas Day. (NWS via Weather Bell)

Given the warm start, you can predict that it will warm up pretty substantially during the afternoon. Look for lower-70s. Any shower activity will probably be isolated and more like drizzle or sprinkles than anything of serious consequence. So no worries in the rain department. There may also be some fog around, especially at the coast on Tuesday morning.

It’s too soon to delve into details here, but it would appear we’re going to transition into an active weather pattern over Southeast Texas after Christmas and before New Year’s. Shower chances will slowly increase on Wednesday before ramping up more on Thursday with a cold front. Some strong thunderstorms and locally heavy rainfall will be possible. There are still some questions as to how quickly this front will push through the region or whether it stalls out nearby, so we could be talking about some lingering rain chances Friday. Mild temperatures will hold on through this period, before probably turning a little colder next weekend. More on this next week.

As my next Friday post will be after Christmas, I want to thank all our loyal readers for their support once again, and I wish you all a happy and healthy holiday season!

11 thoughts on “Literal warm wishes for the holiday season”