An active weather pattern over Texas will slowly increase our shower chances each day this weekend. Generally, the deeper into the holiday weekend you go, the better the rain chances will become. Today and tomorrow probably won’t be too bad. Sunday could see heavier rain west of Houston and Monday could see more widespread coverage of thunderstorms in the Houston area. Specifics beyond “showers and storms are possible” will be hard to come by more than 12 to 18 hours in advance; such is the nature of weather patterns like this. Let’s walk through each day and tell you what we know at this time.

Expect some clouds and some sun today, with sun probably becoming more dominant as we roll toward afternoon. There’s a little more moisture available today, so we will at least mention that a shower or storm is possible. As I am finishing writing this, it’s evident that some showers have popped up out toward Wharton County and up through Columbus, well west of Houston but somewhat sudden and unexpected this morning. We think most activity should be spotty (call it like 10 to 20 percent or so), and storms should be very much the exception, not the rule today but hopefully these morning showers are not a harbinger of a busted forecast to come. We will see!

It’ll be hot and humid with highs around 90° or so for the fifth day in a row.

Another round of showers and storms in North Texas may just have enough “oomph” to hold together as it drops south and east late tonight. We could see a shower or a thunderstorm, mainly north of Houston after 3 AM or so. For most of us? Just mostly cloudy with a slight shower chance or some mist. Lows will be in the 70s.

On Saturday, the best ingredients for thunderstorms remain mostly inland or to our west, which means Hill Country may be the favored area for more numerous showers. We’ll call it a spotty day once again for Houston with a few showers or storms possible, once more being the exception rather than the rule. Odds of storms may go up a bit as you go to the north and west of Houston. 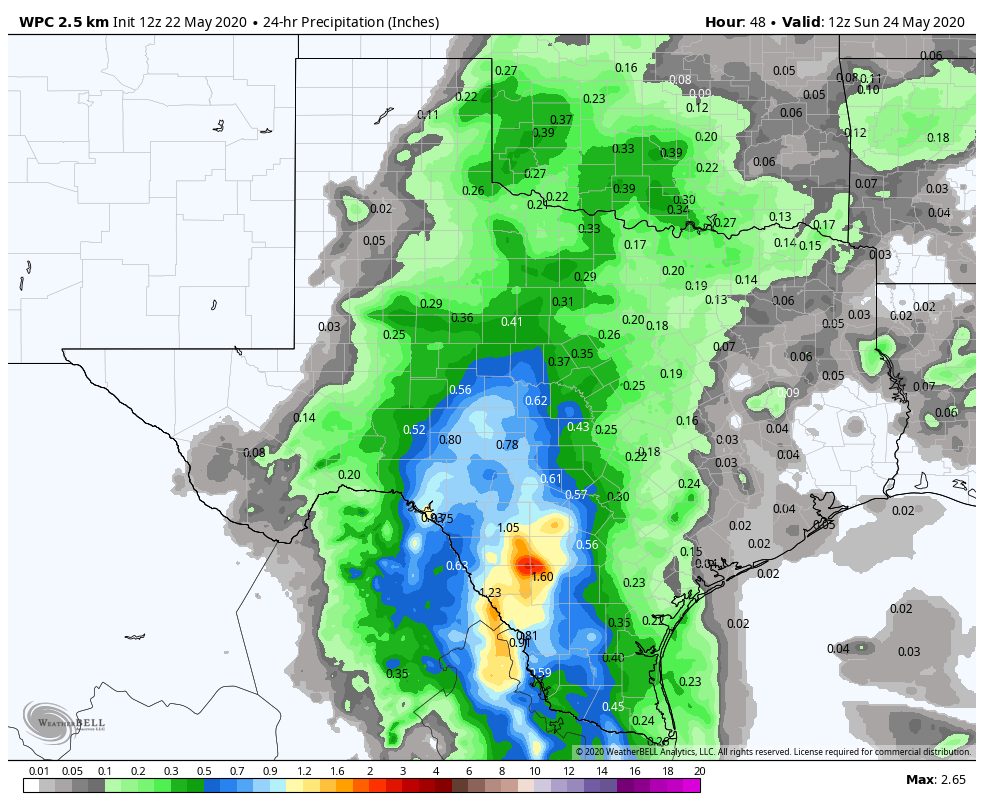 Rainfall between Saturday morning and Sunday morning is likely going to be most significant west of I-35, or way back in Hill Country or parts of South Texas. For Houston? Probably not too significant. (NOAA via Weather Bell)

Look for another hot day with highs likely staying in the upper-80s or low-90s under partly to mostly cloudy skies.

So on Sunday, the best ingredients for storms drift a little closer to Houston. While we think the coverage of storms will still be highest to the west of Houston, there should be slightly better odds for much of the area to see storms. I would say storm chances jump up close to 50 percent on average for Sunday afternoon, higher west of I-45, lower east of I-45. 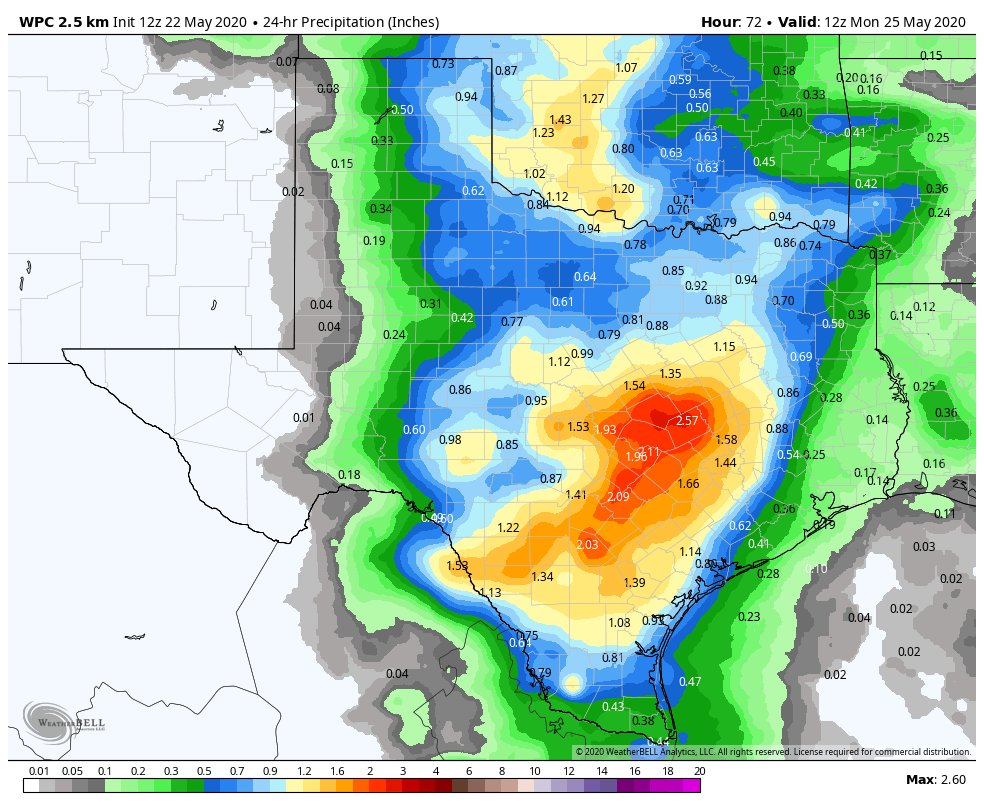 Storm chances on Sunday will still be highest north & west of Houston, but most of the area will be at least at risk for some storms Sunday afternoon. (NOAA via Weather Bell)

Sunday’s storms could also be better organized than what we see Saturday in Texas, so heavier rain is possible. We would say that areas west of Grand Parkway up through Conroe stand the best chance of heavier rains impinging on plans Sunday afternoon. But again, specific details are tough to pin down, so most of the area has at least a chance at some storms Sunday.

A muggy Sunday morning in the 70s will give way to highs only in the mid-80s, maybe  upper-80s with clouds.

We would probably plan on a slightly more dicey day Monday. Expect showers and thunderstorms to develop virtually anywhere in the Houston area Monday morning or afternoon. We could see locally heavy downpours with Monday’s activity. We don’t see anything particularly alarming right now (more on that below), but anytime you have storms like these in May, some street flooding can occur. Morning lows will be in the 70s and daytime highs probably top off in the low- to mid-80s.

This far out, it’s impossible to say anything about details for next week, but Texas is likely to remain locked in this healthy, moisture-rich pattern with numerous daily shower and thunderstorm chances each day through at least Friday. We’ll have muggy nighttimes, but daytime temperatures will be held down due to clouds and showers each day with highs in the mid-80s at best most likely.

Obviously with a lot of rain in the forecast each day, we will inevitably get questions about flooding concerns. Right now that isn’t a top of mind concern for us because it’s impossible to say if any one location will get dumped on. But it’s a wet pattern in Texas in May. You always need to be aware that it could sneak up on you. 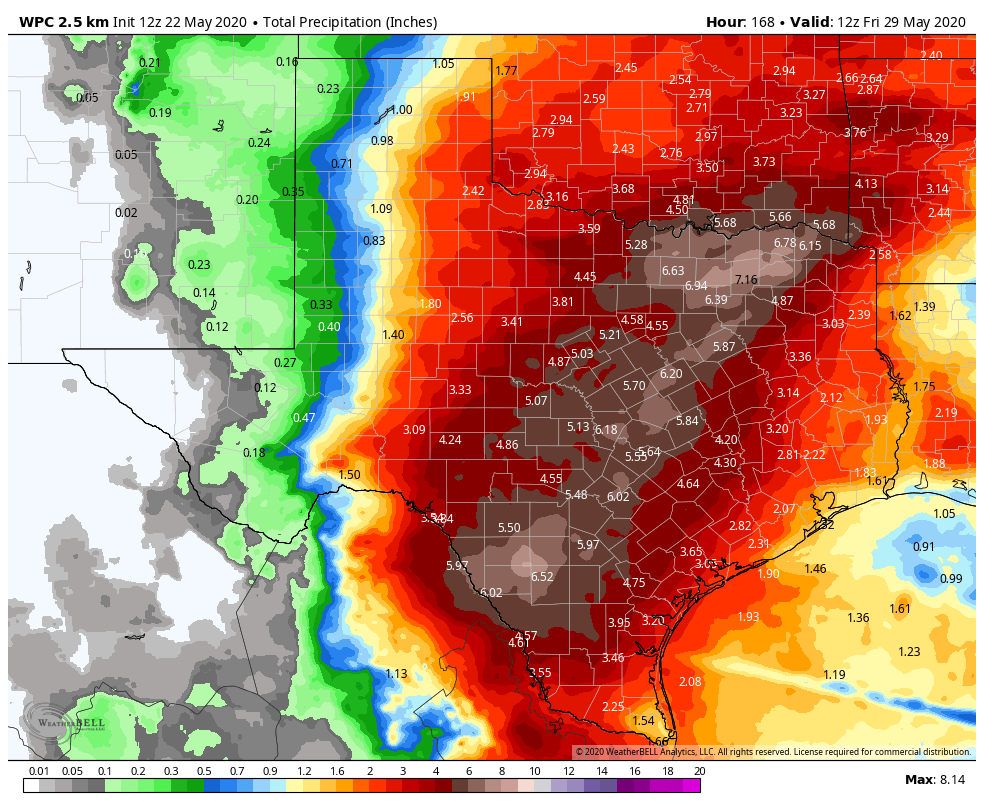 Total rainfall through next Friday morning should average 1 to 2 inches for most folks. Some may see less. But others could see much more in the wrong set of circumstances. This seems especially true across Central & North Texas, but we can’t rule out some 4-6″+ isolated totals over the next 7 days in parts of the Houston area either. (NOAA via Weather Bell)

If you’re traveling to Hill Country or up to Dallas this holds for you as well. If you’ll be camping this weekend anywhere in Texas, especially adjacent to a river or creek or stream, please make sure you have a way to receive weather warnings and remain weather aware in case things do get a little out of control. Otherwise, check back in with us early next week to see if anything has changed.

Persistent onshore flow is a good recipe for rip currents on the Gulf Coast. If you’ll be at the beach anywhere on the Texas coast for the holiday weekend, please be aware of the rip current risk this weekend and be smart when going in the water. 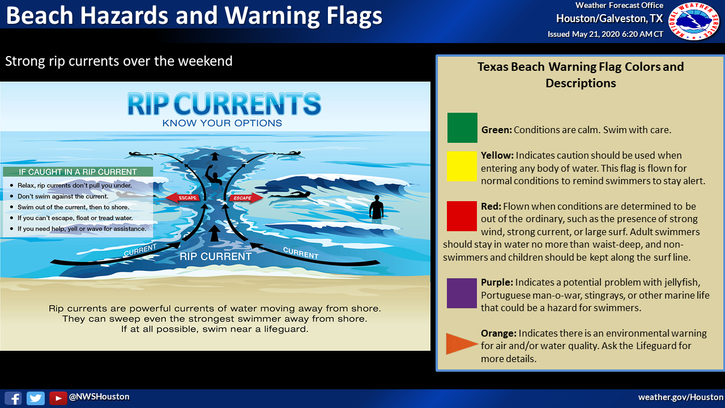 Rip currents are likely to be present this weekend on the Texas coast. Please be aware, follow local guidelines, and know what to do if you get caught in one. (NOAA)

Also, if you’ll be out in small craft on Galveston Bay or elsewhere this weekend, please just be aware that onshore winds will be gusty at times, perhaps up to 20 or 25 mph.