You might be deceived into thinking that summer has nearly arrived in Houston. After all, the city recorded its warmest day of the year on Monday—with a high temperature of 87 degrees, it wasn’t really close. However, a nice cool front arrived Monday night, and forecast models indicate an even stronger front will arrive this weekend. Although I wouldn’t bet on it, I also wouldn’t rule out some parts of the metro area dropping into the upper 30s about a week from now. Anyway, summer isn’t here just yet.

On Monday, a band of temperatures in the mid- to upper-80s stretched into Houston. (NOAA)

The next two days are going to be gorgeous. Highs in the 70s, generally. Lows in the 50s, generally. Ample sunshine. Low humidity. Get outside, y’all.

This will be another nice day, with highs in the 70s. But with southerly winds returning, we may expect a few clouds, and overnight temperatures probably will remain in the 60s for central and southern areas heading into Friday.

More clouds will return by Friday, but we should still see some sunshine, that will push highs into the upper 70s or even toward 80 degrees. Scattered, light showers are possible during the day, although rain chances for most are probably in the 20 to 30 percent range, so pretty low overall.

As we’ve been suggesting, the weekend weather is less certain than the great conditions this week. Saturday should be a mostly cloudy affair, with better rain chances beginning after noon, and running through the overnight hours, into Sunday morning. We certainly don’t see anything extreme at this time, and although it’s early for definitive predictions, most areas probably will see from 0.25 to 1.0 inch of rain, or thereabouts, as a cold front approaches and then sweeps off the coast. Sunday should be cloudy, and cooler, with highs perhaps struggling to reach 60 degrees. 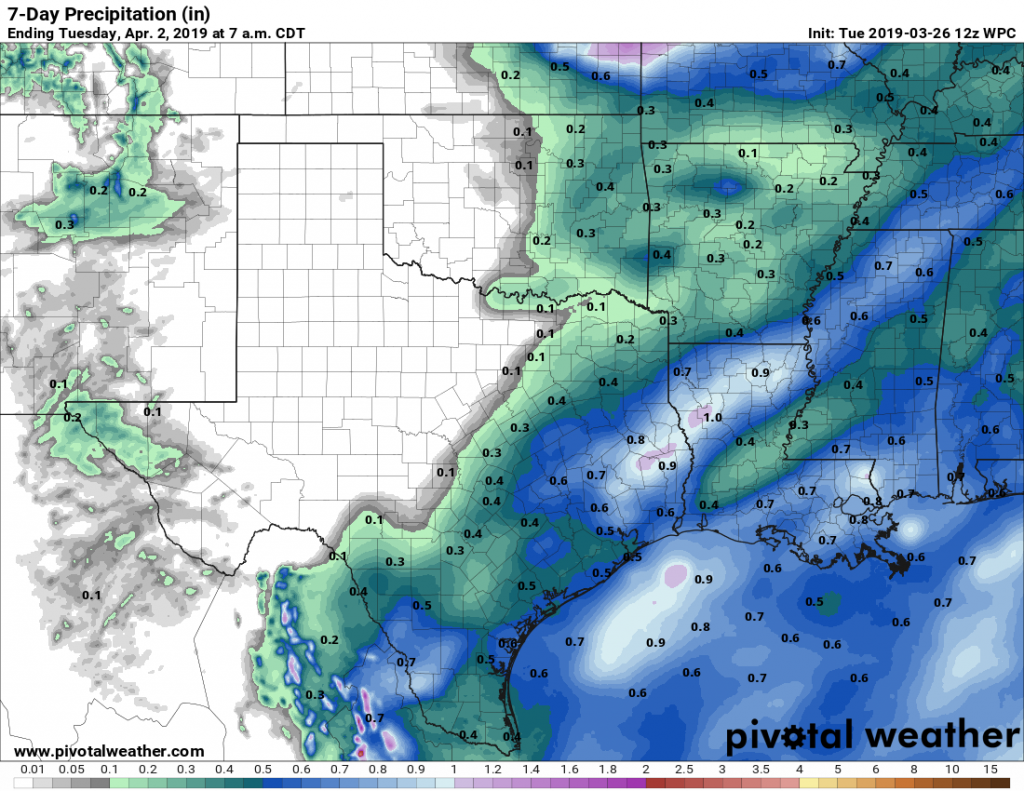 The first few days of next week look quite cold by the standards of early April. The coldest night probably will be Monday, although it’s hard to say for sure, because that’s when the cold air mass will be solidly entrenched and we should see clear skies. Lows that night may fall into the upper 30s for parts of Montgomery County, and maybe even some areas of Harris County. We’ll have to see. But it’s safe to say that right now a fairly cold air mass is coming to the region early next week. Enjoy it while you can—this probably will be the last truly strong front of the season.

4 thoughts on “Monday notwithstanding, winter is not quite over in Houston”