Imelda is thankfully in our rear-view mirror now, and we can begin the process of cleaning up from the latest in a slew of problematic flooding events in Southeast Texas in recent years. Eric and I will take some time to process this and recap it for you in some capacity next week. The weather doesn’t stop, so let’s discuss our weekend.

First, let’s talk about residual Imelda-related issues. Most bayous across central, southern, and western Harris County are back in their banks this morning. We do still have flooding issues in eastern Harris County. 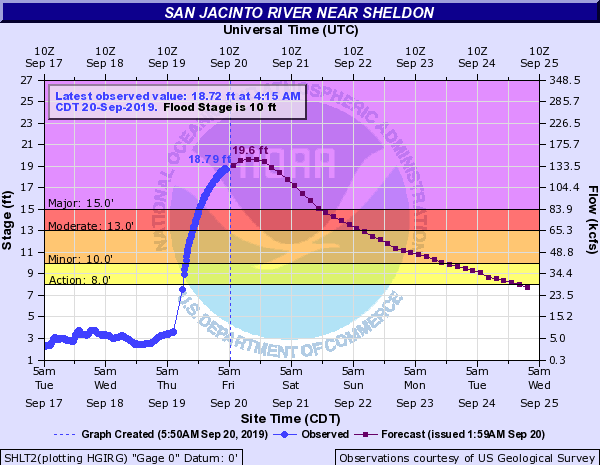 The San Jacinto River below Lake Houston will rise and crest in major flood today before slowly dropping back this weekend. (NOAA/NWS)

The San Jacinto River near Sheldon (above) continues to rise and should crest this afternoon before slowly falling this weekend.

Folks living along the Brazos River, you have nothing to worry about, as rains both over you and upriver were not too significant this week.

Those trying to travel to or from Beaumont, note that I-10 is shutdown at the San Jacinto River due to multiple barge strikes. And it sounds like it might be awhile.

I-10 East Freeway EB and WB at the San Jacinto River all mainlanes are closed. Several barges have impacted the bridges at this location. This is a developing situation that is further enhanced by the river rising. No est. time on reopening. Use SH 225 as an alternate. pic.twitter.com/DLpw4YH4TZ

I-10 also remains closed in both directions between Winnie and Beaumont due to high water.

Not everyone will see showers or storms today, but they will be around. Any storms today will probably move south to north at a slow, steady clip, so they could put down a quick inch or so of rain. While this won’t lead to widespread problems, there could be a handful of locations today that see some short-fused street flooding or some rises on bayous. Again, we don’t expect anything significant. With a good deal of clouds still, we should see highs in the mid- to upper-80s.

Both Saturday and Sunday should see a mix of sun and clouds with just a chance of a shower or storm in a few spots. We’re sort of back to typical late summer this weekend. Look for highs near 90 degrees or in the low-90s and lows in the mid- to upper-70s.

Look for a continued pattern of sun, clouds, and slight storm chance Monday and Tuesday. The midweek period looks perhaps a bit more unsettled with slightly better shower and storm chances. Right now, we don’t expect anything too serious from that, but we’ll continue to watch. We should dry out a bit and start to heat back up late week.

We continue to get asked the question: When will get the first cold front!? Sadly, I don’t have anything new to add on that this morning. There may be some signs that in 10 days or so we at least get a weak one through here, but that would only knock back temperatures a tiny bit, so I would not get my hopes up. We will continue to watch and one day have good news for you.

The Atlantic remains active with Hurricane Jerry out there, expected to go out to sea, though it could threaten Bermuda on the way out. Bermuda, incidentally, was hit by Hurricane Humberto while Imelda came ashore here, for those of you curious about those things. 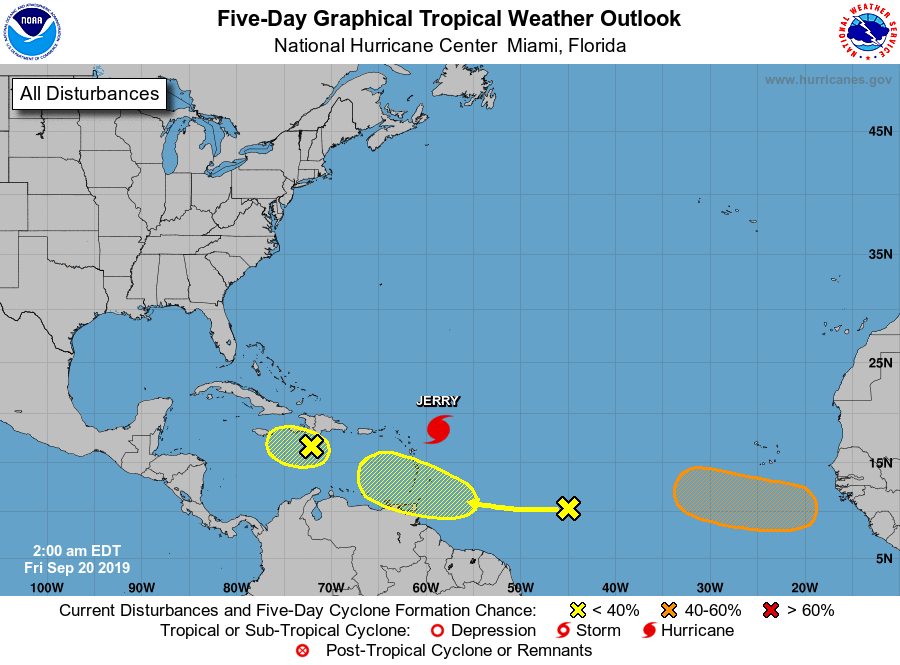 As for the Gulf, while we are watching two disturbances in the Caribbean, neither is expected to develop appreciably as they come west. We don’t see any serious Gulf concerns into early next week. I think we would all feel a little better if we could drive that first cold front through here, so we will be watching closely for any sign of that in modeling heading into next week.

50 thoughts on “Moving on from Imelda”