We’re coming to the end of June in Houston, and the city’s official temperature has peaked at 98 degrees so far. Although I don’t anticipate that the city’s temperatures will hit 100 degrees over the next week, as we get into July the overall probability of hitting the century mark will rise. With that in mind, here is some 100-degree day climatology for the city of Houston:

The absence of 100-degree days in June is probably a decent sign for the rest of the summer in terms of extreme heat, but alas there are few guarantees when it comes to weather. 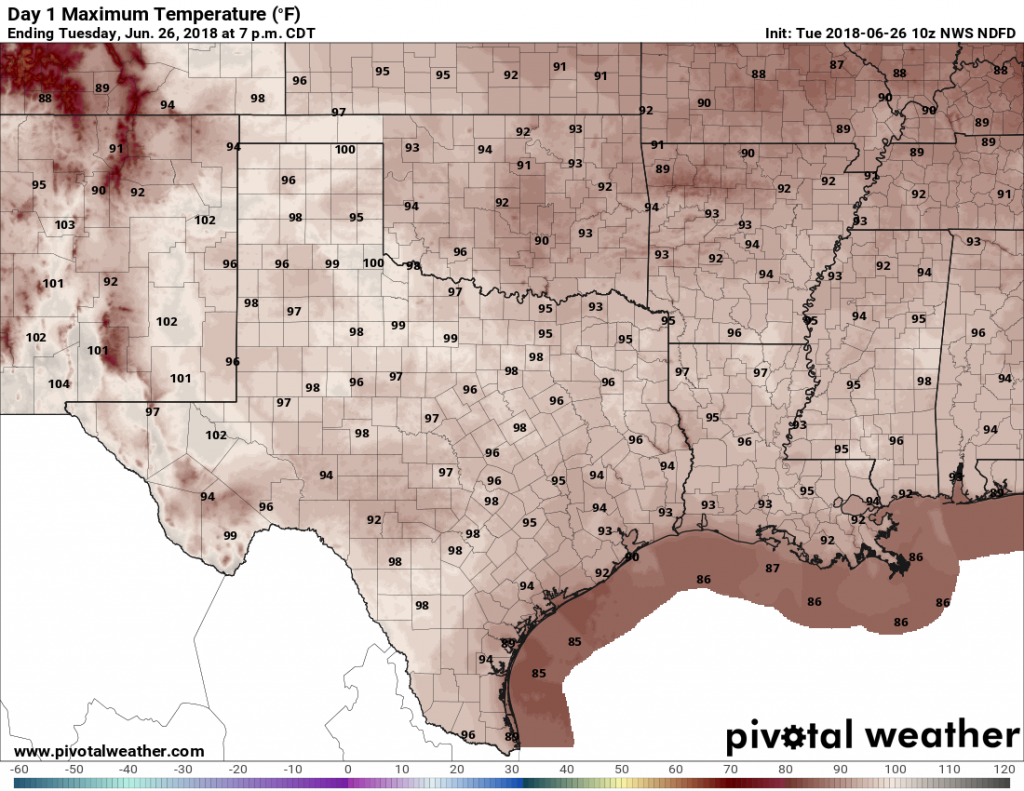 High temperatures Tuesday will be warm, especially with the humidity, but not extreme. (Pivotal Weather)

Moisture levels are lower than Monday, so I expect few if any rain showers across the metro area today. Most probably, we will see hot and sunny conditions with high temperatures in the low- to mid-90s. If you picked today to skip work and head for the beach, you made a good choice weather-wise.

Atmospheric moisture levels won’t be too high during the middle of the week, but neither will high pressure be dominating our weather. Therefore we will likely see some scattered showers develop, especially during the afternoon hours. However I don’t expect particularly significant accumulations from any rain. Both days should be mostly sunny and in the low- to mid-90s.

The weekend bringing us into July looks hot and sunny as high pressure begins pressing in from the west. The net effect of this will be highs in the mid-90s, ample sunshine, and near zero rain chances. Again, this will be an excellent weekend for any outdoor water-based activities. (Except ice sculpting. Bad for that, I am afraid).

Monday and next week

The high pressure that builds this weekend over Houston won’t stay that long, and I expect it will move on by earlier next week. The combination of falling pressures and increasing moisture will probably generate some clouds and decent rain chances, especially beginning on Tuesday and Wednesday (July 4th). We’re not anticipating any kind of a washout, so I wouldn’t be too concerned about showers during fireworks just yet.