Eric noted yesterday that we haven’t hit 100° yet in Houston this year. Despite that, if the month ended yesterday, we would have one of the ten hottest Junes on record in Houston. Even without real extreme heat this June, it has been a mostly sustained hot month. We’ll close the book on June next week and have more numbers for you then. Meanwhile, let’s talk some slim rain chances, dust, and the chance of a pattern change next week.

By no means are today, tomorrow, and Friday going to be considered really stormy days here in Houston, but they may represent our best chances for a smattering of showers or a few thunderstorms until next week. All three days should see at least a handful of showers on the radar from mid-morning through mid to late afternoon. Thursday has the better chance of the three days. But consider yourself lucky if you get a cooling downpour, as many folks will likely stay dry through this period. Expect high temperatures to peak in the lower to middle 90s both days. AM lows will likely hang in the mid- to upper-70s.

Hot: That about sums up this weekend. Expect sunshine and heat, with storm chances about as close to zero as you can get this time of year. There’s always a chance a rogue downpour could pop up, but it will be decidedly hot and dry. Take care and drink plenty of water if you’ll be outdoors this weekend.

And just to add to the allure, it will be dusty and hazy. The leading edge of a Saharan dust plume from Africa will make it to Texas this weekend, giving the sky a milky, hazy, almost grimy appearance at times. It may also make for interesting sunrises or sunsets.

A dust plume from the Sahara Desert will complete its trip across the Atlantic Ocean in Texas this weekend. (NASA)

If you have any respiratory ailments, it may not be the worst idea to take it a little extra easy this weekend too. Expect the dust to perhaps be noticeable as early as Friday, but much more obvious on Saturday.

I’d expect mid-90s for highs both Saturday and Sunday, along with nighttime lows in the mid or upper-70s once more.

Our confidence is growing in a bit of a pattern change for next week. Monday will probably just be a carryover of the weekend with sun and heat. But we should begin to see a change on Tuesday. 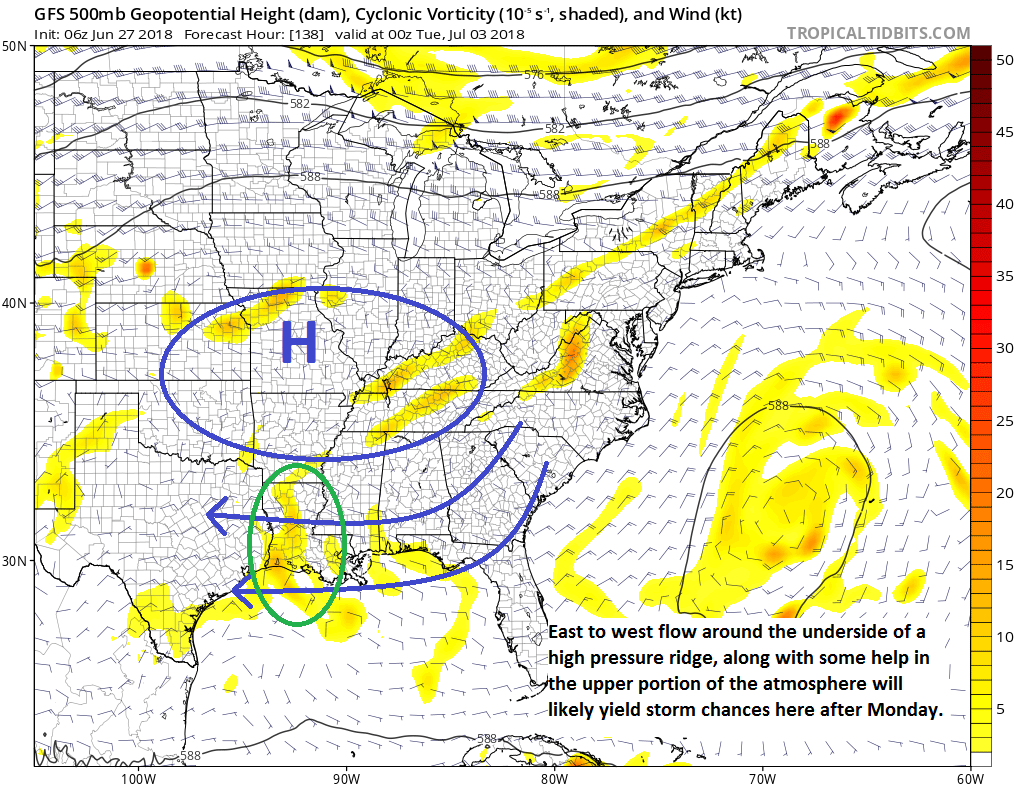 The weather pattern will be more supportive for a couple days of rain chances early to middle next week. See the text for an explanation. (Tropical Tidbits)

Let’s get into some meteorology. The weather pattern over the United States is going to be in flux next week. Strong high pressure that will bring abnormally hot weather to New England and the Northeast Corridor over the weekend is going to begin to shift south and west back toward the center of the country. As this happens, the flow around the bottom of this ridge will be out of the east, allowing for some tropical moisture to point its way toward Louisiana and eventually Texas.The map above is valid for Monday evening. It looks like there’s also going to be an upper level disturbance in play while this happens. That can help boost storm chances.

What does this mean for us? The combination of increasing moisture from the Gulf and an upper level disturbance is a good recipe in summertime for thunderstorms. I am concerned that the Fourth of July is trending to be a damper one than many of us would like. If you have outdoor plans scheduled, you will want to keep tabs on this forecast. I’m not thinking total washout right now, but I am thinking the risk of rain will be higher than it has been since last week. Second, it could mean some strong thunderstorms. So again, if you have outdoor plans on Tuesday, Wednesday, and perhaps Thursday, keep tabs on the forecast. It’s far too early to discuss amounts and specific timing. Just know that odds of storms have trended up a bit, centered on Tuesday or Wednesday of next week.

Beyond that? Things should return back to standard summer fare for Houston with hot weather and lower-end daily rain chances. We’ll keep you posted.

11 thoughts on “A few showers, plenty of heat, and dust for Houston”