More storms impacted the region yesterday, mostly on the south and east sides of Houston. Thursday’s star of the show was a supercell over Galveston Bay that produced nearly 70 mph winds on the Texas City levee and multiple waterspouts in the bay.

Friend sent this photo from La Porte, TX around 2:30. pic.twitter.com/fPfu90MLk5

We see waterspouts fairly regularly around here, but this was one or two levels above a typical one. Really impressive structure and intensity with that storm. Thankfully, this remained over water, though it did come very close to producing a tornado on Galveston Island.

We also do think that this pattern of nasty, over-productive daily thunderstorms has begun to wind down. Houston starts the transition to something very summer-like heading into the weekend.

With the upper level storm that’s been sitting off to our northeast, we’ve been stuck in a pattern with winds aloft out of the northwest, bringing disturbances our way each day that have helped to invigorate our daily storms. That upper level system rockets off to the north and east today, integrated into a passing disturbance over the Great Lakes. Along with that, the amount of atmospheric moisture available is a little lower today, and the forecast of instability on the models is also substantially lower. I think that should be enough to limit just how widespread and strong showers and storms can get this afternoon. 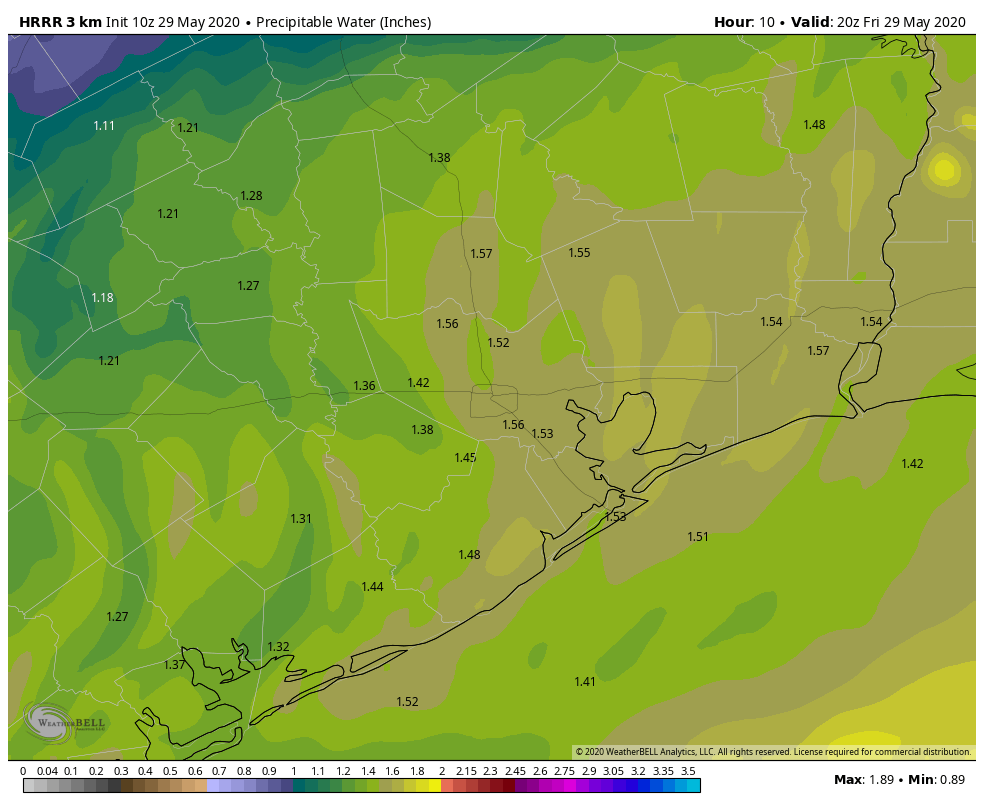 Precipitable water, or roughly how much atmospheric moisture is available is still high enough for some scattered showers today, but it is substantially lower than it has been the last 2 days. (Weather Bell)

So what does it mean? It does mean another chance for showers or a thunderstorm today, however they should be somewhat kinder and gentler than those of the last few days. The highest chances today will be close to the coast or off to our east. That doesn’t mean a shower or storm can’t happen elsewhere; it’s just more likely closer to the sea breeze. We will see a mix of clouds and sun otherwise. Humidity will be low for this time of year, which should allow high temperatures to get to near 90 degrees this afternoon without much trouble.

We should settle back into a typical summer type pattern of sun, clouds, hot weather, and perhaps a brief passing shower. High pressure starts to flex, which will really drop the rain risks. The best odds look to be mostly toward Matagorda County, Wharton County, or southern Brazoria County. Unlike the last few days where we’ve seen storms blow up, anything this weekend would probably be slow to develop and max out maybe as a brief downpour and likely nothing worse. Humidity will increase a bit further, and we’ll see highs again around 90 degrees, give or take. Saturday and Sunday morning’s lows will be around 70 degrees, a little warmer at the coast and a little cooler farther inland.

A rather vigorous ridge of high pressure in the upper levels of the atmosphere is going to exert itself over Texas and much of the Deep South early next week. Down here on the surface, that usually means dry, hot weather. Both Monday and Tuesday should be partly to mostly sunny with highs in the low-90s. Morning lows should stay around 70 to 75 degrees in the city, warmer at the coast, and perhaps a little cooler inland.

There’s a good chance that the early week ridge of high pressure is going to stick with us into the back half of next week as well, but it will begin to weaken. Assuming that’s the case, we’d probably continue to see mostly hot weather, with highs likely in the low-90s and lows slowly inching deeper into the 70s. I would probably reintroduce afternoon shower chances beginning Wednesday or Thursday, but that would be no better than 20 to 30 percent initially. Odds may go up toward Friday or Saturday.

Eric briefly mentioned the tropics yesterday, and I have nothing really new or illuminating today to add to what he said. It seems like that there will be some kind of disorganized Gulf disturbance by late next week or weekend, but where it goes and if it develops at all is highly questionable at this time. Much more as needed on Monday, when hopefully we have a few more answers on this.

One thought on “Quieting down this weekend; heating up a bit next week”