After a mostly hot and dry weekend (some areas, particularly west of Houston weren’t entirely dry, of course) we’re going to see a pattern change this week, with some better rain chances returning. And don’t begrudge the rain—we’ll need it for what’s ahead.

As high pressure to the northeast of Houston continues to move off we should see some slightly better rain chances today, especially when temperatures near their peak levels in the low 90s this afternoon. Some of these showers could be locally heavy, although probably brief. For parts of Houston that don’t see rain (likely a majority of the city) conditions will be pretty hot, with the heat index rising into the low 100s.

On Tuesday most of the forecast models show a frontal boundary pushing into the Houston region. Now this isn’t going to bring significantly cooler air, but it will bring some instability that should lead to fairly widespread showers, and the potential for some locally heavy rain that might briefly flood some streets. But I’m not anticipating any widespread flooding problems because these storms should develop and then weaken pretty quickly. Highs will depend upon the amount of rain coverage. For most areas accumulations should be well under 1.0 inch. 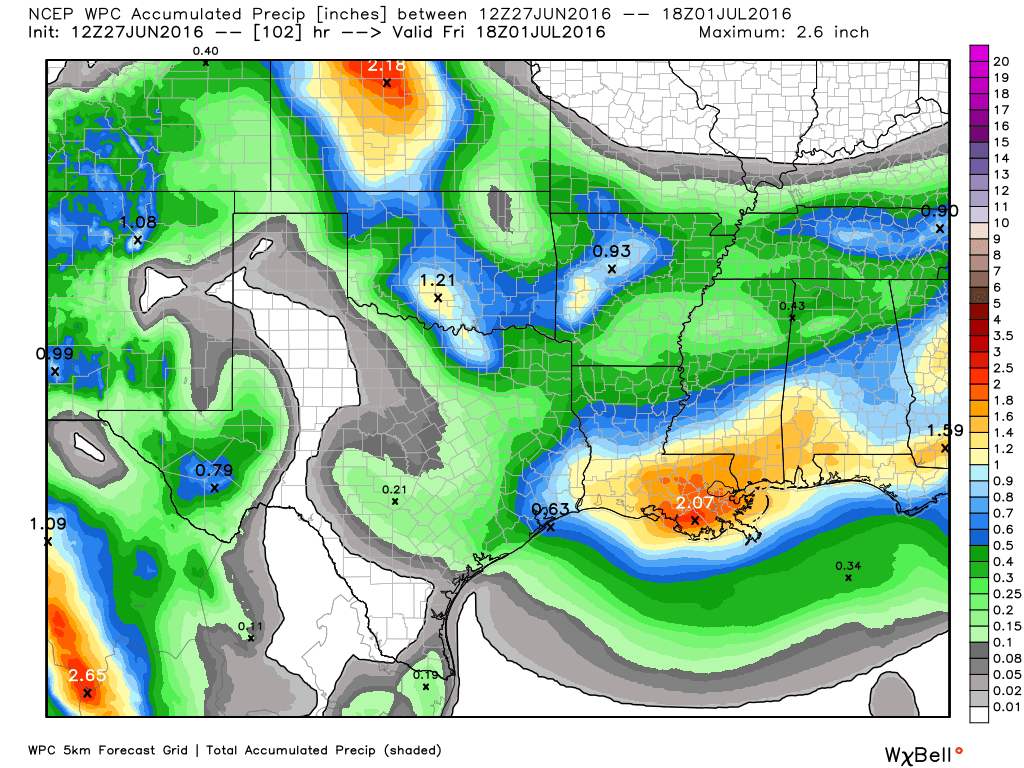 The forecast for Wednesday and Thursday are a little trickier. If the front pushes all the way to the coast it will bring some drier air, and accordingly that should tamp down on rain chances except for areas right along the Gulf of Mexico. But if the front washes out then showers could be more widespread. Highs should be in the low 90s.

I’m not ruling out a few showers on Friday, but at this point it looks like high pressure will begin building over the region by Saturday or Sunday, and we’re going to enter one of those classic, very hot and very dry periods we often see in July and August in Houston. It’s hard to see the region getting much rain next week, so let’s hope for some rain now to prepare us for this drier period.