Good morning. We’re starting to see light to moderate rain showers move into the Houston area from the northwest, which is being driven by a weak cool front. More dynamic weather is ahead after that.

As the cool front nears the coast it should stall, and we’ll see this rain end during the late morning or early afternoon hours. Highs today should be in the mid-70s as this first front won’t pack much of a punch. Lows tonight will be around 60 degrees.

Another, considerably stronger cold front will reach Houston sometime during the middle of the day on Tuesday, and this will bring much windier, and cooler conditions. This current of fast moving air in the lower levels of the atmosphere, also known as a “jet,” will also bring the possibility of storms before and during its arrival. While the most favorable conditions will be over coastal Louisiana and further east, Houston may also see a few scattered tornadoes and hail. Rain showers and storms are most likely from Tuesday morning through the early afternoon hours, before ending after the front’s passage. Accumulations of 1 to 3 inches are possible north of Houston, with one-half inch of rain or less closer to the coast. 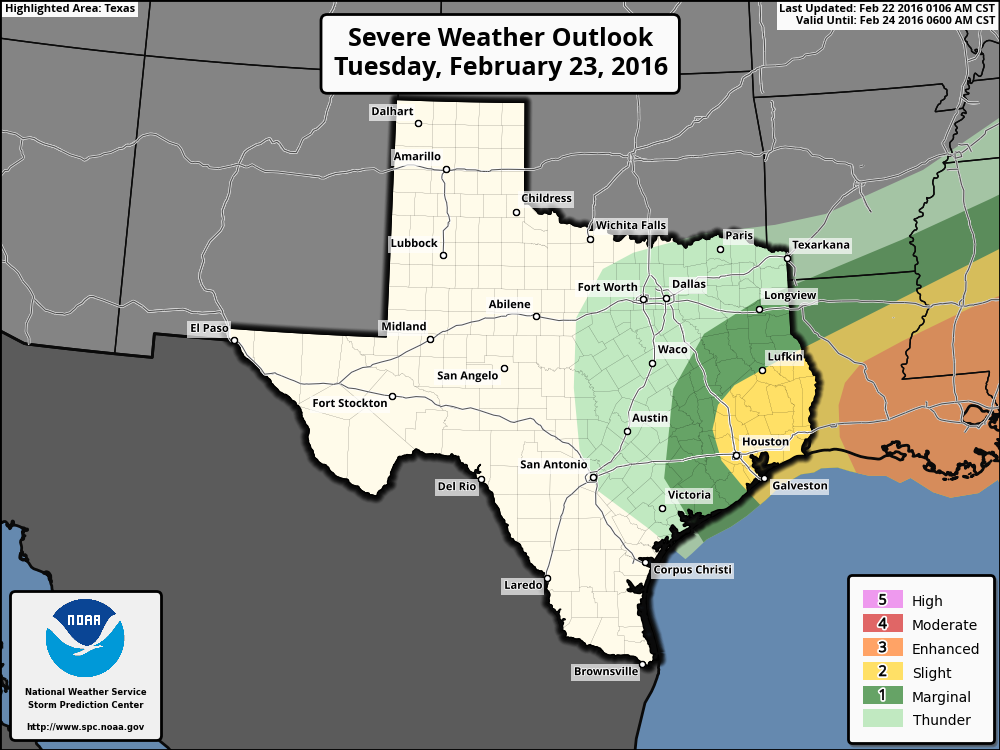 As the front passes, and afterward, we will definitely see strong winds out of the northwest, possibly gusting as high as 40 mph. The region is under a Gale Watch from Tuesday evening through Wednesday morning. Temperatures will fall into the 40s during the overnight hours. If you’ve been waiting to fly a kite, now’s your chance!

We’ll remain windy through Wednesday morning, although conditions should ease during the afternoon or evening hours. Highs will only climb into the low 60s despite sunny skies, with overnight lows falling into the low 40s.

We’ll continue to see sunny days with highs in the 60s, and lows in the mid- to upper-40s.

Conditions should warm up a little bit, with mostly sunny skies and highs in the 70s. At this vantage point it looks like a nice weekend ahead.