Houston will have one fairly dynamic weather day on Tuesday before high pressure takes control for the rest of the week, and probably at least early next week. There are three weather concerns to discuss today:

High winds: A wind advisory is in effect for the entire region through 6pm Tuesday as winds race onshore. Gusts of 25 to 35mph will be possible before there is some easing later this afternoon and during the overnight hours.

Coastal flooding: Because of those strong onshore winds, a Coastal Flood Warning in effect for the coast from High Island to Freeport, including areas surrounding Galveston Bay. Elevated water levels and high wave run up will cause coastal flooding near times of high tide today. Portions of low lying areas and roads along the bay could flood. This includes portions of Todville Road in Seabrook, and lower sections of Red Bluff Road between Bay Area Blvd and Highway 146. 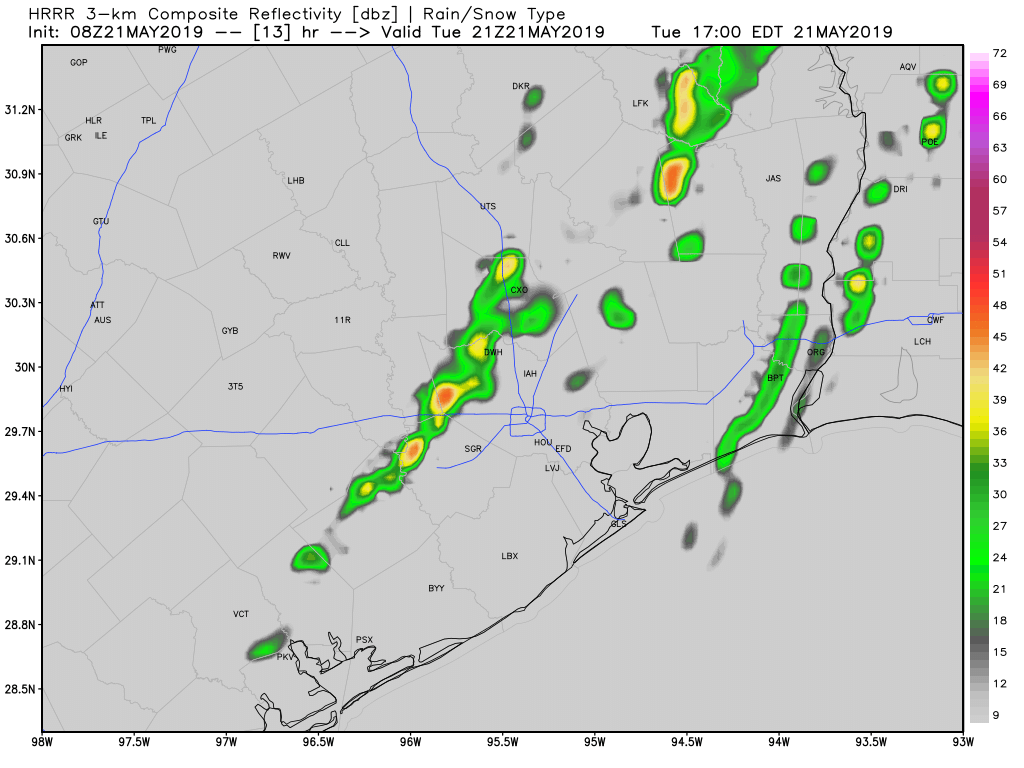 Thunderstorms: Areas north of Interstate 10 in Houston face a minor risk of strong thunderstorms this afternoon as a (likely) broken line of showers and thunderstorms traverse the area from west to east. We can’t rule out some isolated hail, but the overall risk appears fairly low.

Otherwise, inland areas will see rain chances in the 30 to 50 percent range today, and the coast 10 to 30 percent as this line of storms pushes through this afternoon and early evening. Any accumulations should be slight, and given the dry weather that lies ahead I’d rather have the rain than not. Highs, otherwise, should be in the upper 80s under mostly cloudy skies.

There’s not much to say about the region’s weather after Tuesday. A very strong ridge of high pressure will build over the southeastern United States, and the Houston region will gradually fall under its influence. To that end, we can expect mostly sunny days, high temperatures of around 90 degrees, and overnight lows generally in the mid-70s.

This is the kind of pattern, if it were July rather than May, highs would likely register in the upper 90s. But fortunately we’re not quite into the depths of summer yet. It will still be plenty warm, however. 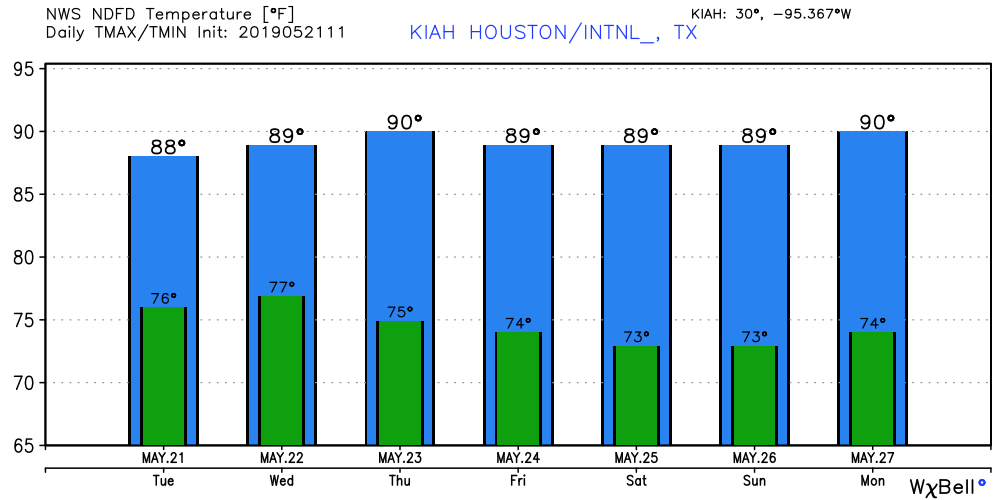 The forecast for Houston is consistent for awhile after Tuesday. (Weather Bell)

Conditions remain more or less the same for Memorial Day weekend. It will be a great time for a cold drink and relaxing near a body of water.

So when does this pattern break? Most of the global models suggest high pressure will hold sway over the region through pretty much the rest of May, meaning rain accumulations after today could be 0.0 inches for the rest of the month. Towards the end of next week this pattern may break down and allow some decent rain chances to return, but really that’s at the edge of our ability to predict with any confidence.