Thus far, Barry has been virtually a complete non-event here in the Houston area. We have had a few showers and some nice sunrises and sunsets but not much else. We may begin to see a bit more activity today as Barry pulls out of the Southern U.S. and a slightly more complex pattern overhead allows storms to develop.

Tremendous bands of heavy rain and thunderstorms have been occurring all morning — in the Gulf of Mexico. Radar estimates 10 inches or more has fallen way out over the open Gulf, thankfully.

It’s been raining a lot — offshore. We should begin to see showers and storms develop onshore this afternoon. (College of DuPage)

That area of rain will probably begin to dissipate today and new showers and storms should begin to fire up this afternoon, especially along or southeast of US-59. Weather modeling still disagrees on exactly how this will play out, but in general, scattered showers and storms should continue off and on in that general area: Call it southern Fort Bend, southeast Harris, Brazoria, Galveston, and Chambers Counties east to Port Arthur. Rains should be manageable in most cases, but we will want to keep tabs to see if any higher rain rates can get going. If that happens, some localized street flooding would be possible. Nothing to worry over, but something to monitor through tonight.

Additional showers and storms may continue into tonight or Monday in those same general areas mentioned above. Again, localized heavy rain will be possible. How much rain in all when this ends? 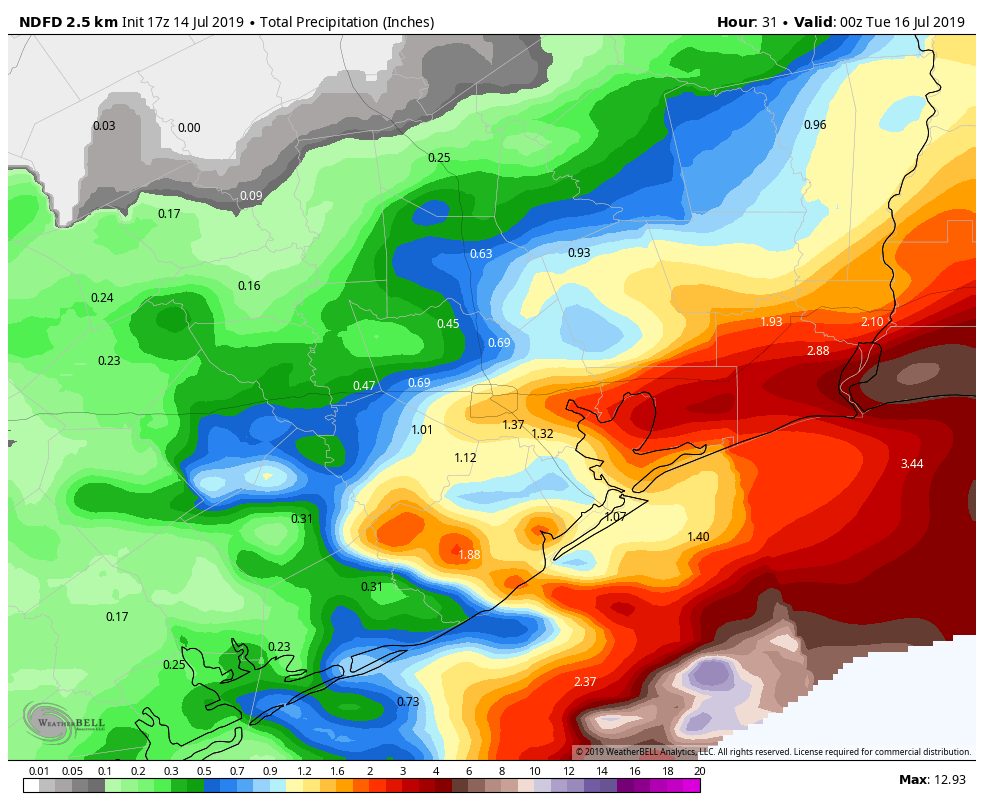 Heavier rains south and east of Houston may deposit 1 to 3 inches on average, but both higher and lower amounts are possible. (NWS via Weather Bell)

I would expect an average of 1 to 3 inches south and east of Houston, with an inch or less average north and west of Houston. Some higher and lower amounts are both possible in those areas. We will watch this through the evening and update you in the unlikely event it is needed.

For those wondering how Louisiana is faring, things have been about as good as can be hoped for so far. Flooding is ongoing in spots, but severe, widespread devastating flooding has not materialized at this point. As heavy rains continue on saturated grounds, however, some problems could begin getting more troublesome. As of this writing, one significant band of heavy rain was aimed at the Baton Rouge area and another at New Orleans (which has fared fine so far). Flooding problems will worsen south of New Orleans unfortunately, in areas that have been relatively hard hit. If anyone cares to follow details on the event, I did create a list on Twitter with local Louisiana & Mississippi meteorologists, national tropical experts, and local government agencies and media.