Good morning. We hope everyone is safe and doing well this morning. It has been a rough 12 hours in Houston and the surrounding area. From hail to non-stop lightning to flooding, I think we have all had enough. Numerous schools are closed this morning, including Houston ISD. Total rainfall over the last 24 hours has ranged from anywhere between 1 and about 7 inches across the region. On average, most places did 2 to 5 inches or so. 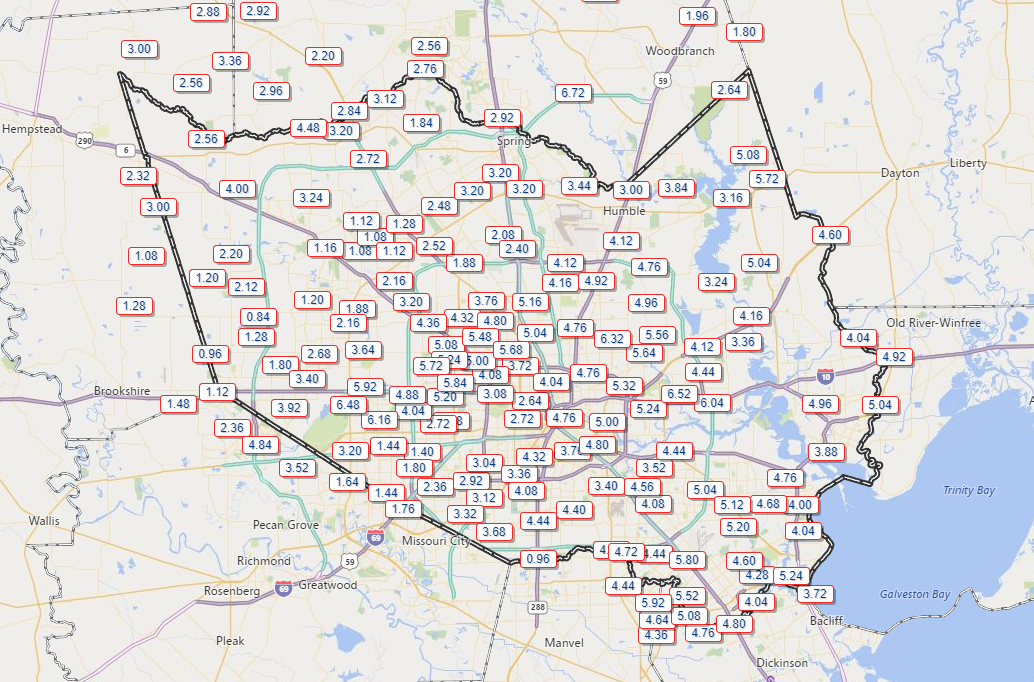 24 hour rainfall totals have ranged from 1 to 7 inches, but on average have been about 2 to 5 inches. (Harris County Flood Control)

There are still numerous spots around the city and suburbs dealing with high water and street flooding. An areal flooding warning is in effect for almost the entire metro area through 10:30 AM. 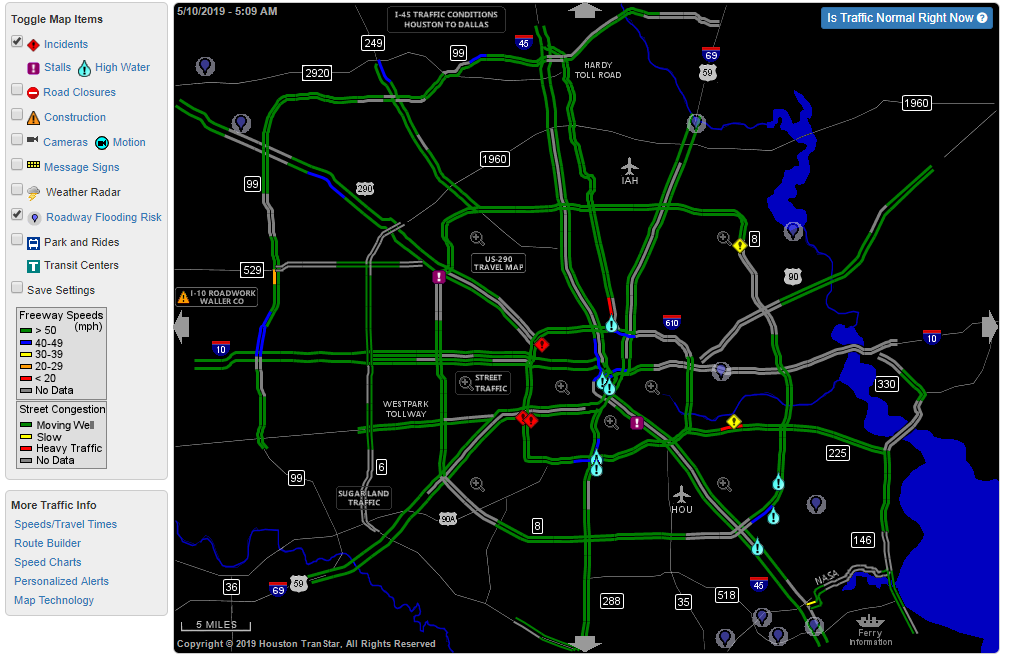 As of 5:10 AM, there were still a number of high water locations on area freeways, and street flooding was still ongoing in parts of the area. Use caution and give yourself plenty of extra time this morning if you will be commuting. (Houston TranStar)

There were still a number of bayous that were either near bankfull or out of their banks. Most were southeast of the city, particularly along Clear Creek which is experiencing minor flooding between Pearland and Clear Lake. Spring Creek to the northwest is still rising a bit and is out of its banks at Hegar Road, as is Little Cypress Creek at Becker Road. Armand and Hunting Bayous have crested and will continue to slowly fall. Halls Bayou has as well, but that I-45 area near Mt. Houston is still a mess.

Trucks going the wrong way on I-45 feeder just trying to get thru the flood. Not sure why? #abc13 https://t.co/9BScHTxDNs pic.twitter.com/ctibnPN3ej

You can view the latest status of bayous and creeks at the Harris County Flood Control website. On the upper left, just check the dial for “Channel Status.”

In terms of the larger rivers: The West Fork of the San Jacinto is rising at US-59 near Humble. 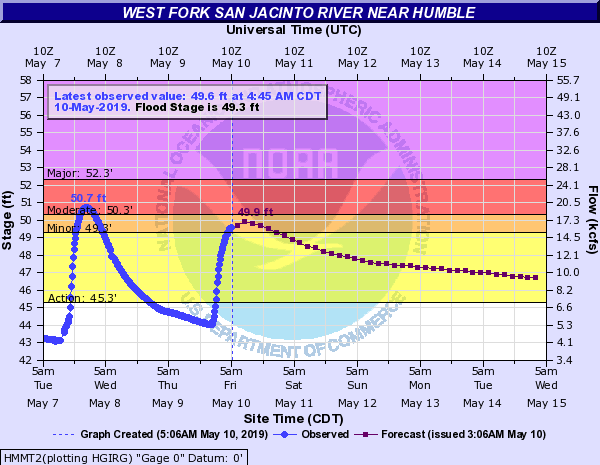 The West Fork of the San Jacinto River will crest later near moderate flood levels, or just a bit lower than the other day. (NOAA)

It will probably crest later today around a foot lower than we saw on Tuesday.

The Brazos will experience moderate to major flooding and is going to crest later this weekend about one foot or so shy of record levels at Rosharon. It will crest sometime today or into the weekend slightly less impressively, but still in solid moderate flood at Richmond. And it is going to stay high for a good time to come.

The Brazos River will likely crest by the end of the weekend at Richmond and Rosharon in moderate to major flood. The river is going to stay high for a while beyond that. (NOAA)

The bottom line: Be cautious this morning if you are out and about as there are a number of locations still flooding. But in general, conditions should slowly improve through the day.

Alright, let’s get into the forecast.

Radar as of 5:35 shows that the majority of the rain has shifted well east of the area. We are seeing new showers develop to the west and south of Houston. This isn’t unexpected, but it may mean some additional downpours over the next few hours, particularly along and southeast of US-59 from Victoria through Houston. There has been flash flooding in Galveston 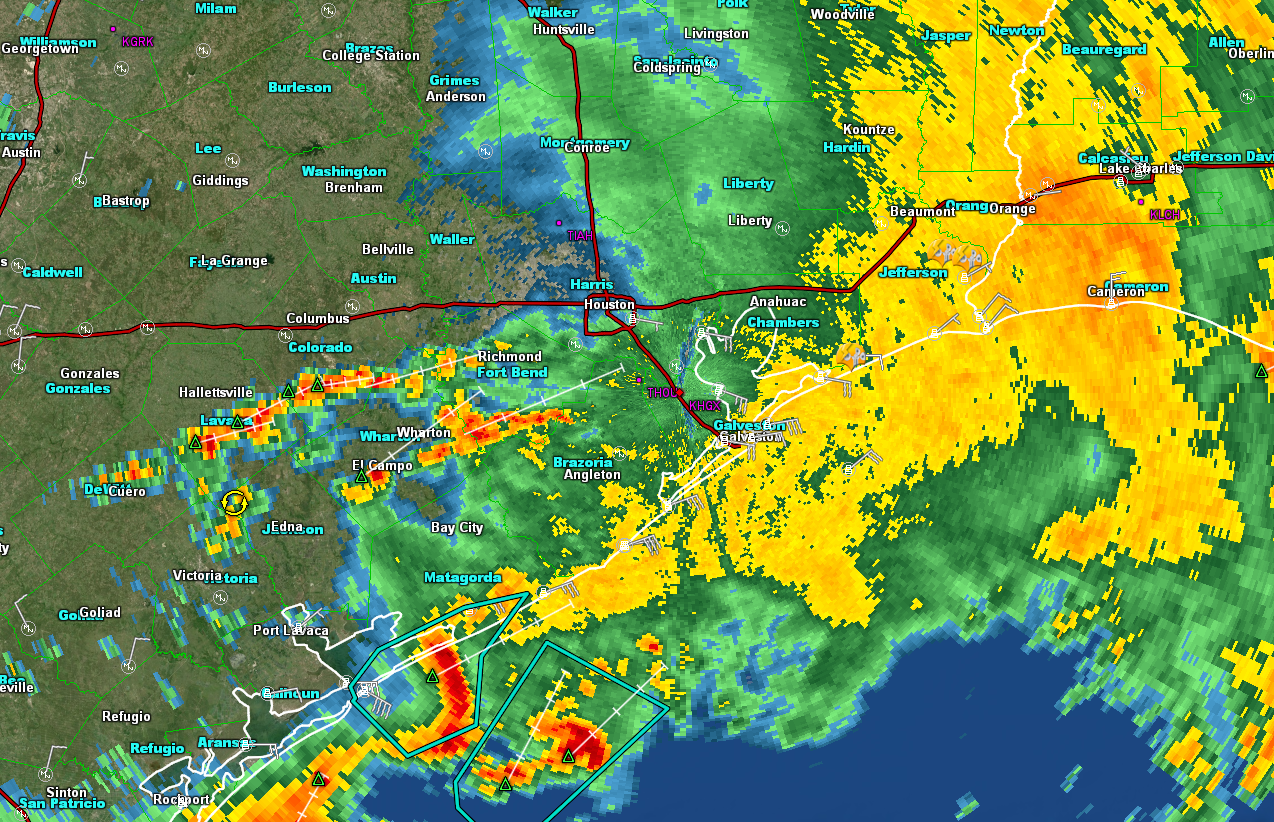 The bulk of the rain has moved east of the Houston area as of 5:35 this morning. Additional showers are still possible through mid-morning. (GRLevel3)

These showers should gradually diminish and shift off to the east through the morning. There is simply very little “energy” left in the atmosphere over us to sustain new storm development. We’re tapped out after last night. So the trend should continue to be toward a drying one this morning.

Other than a handful of scattered showers in parts of the area, the rest of today looks quiet. We will have a chance to dry out a bit and clean up any mess left behind.

While the evening will likely start off quietly, things should begin to change during the 8-10 PM timeframe. Right out of the gate, let me be up front: We don’t foresee a repeat of what happened last night across the Houston area. That being said, we do think after that 8-10 PM window, the chances of potentially heavy rain increase. Look for scattered thunderstorms to pop up, especially after midnight and heading into Saturday morning. Rains will again be potentially heavy at times. 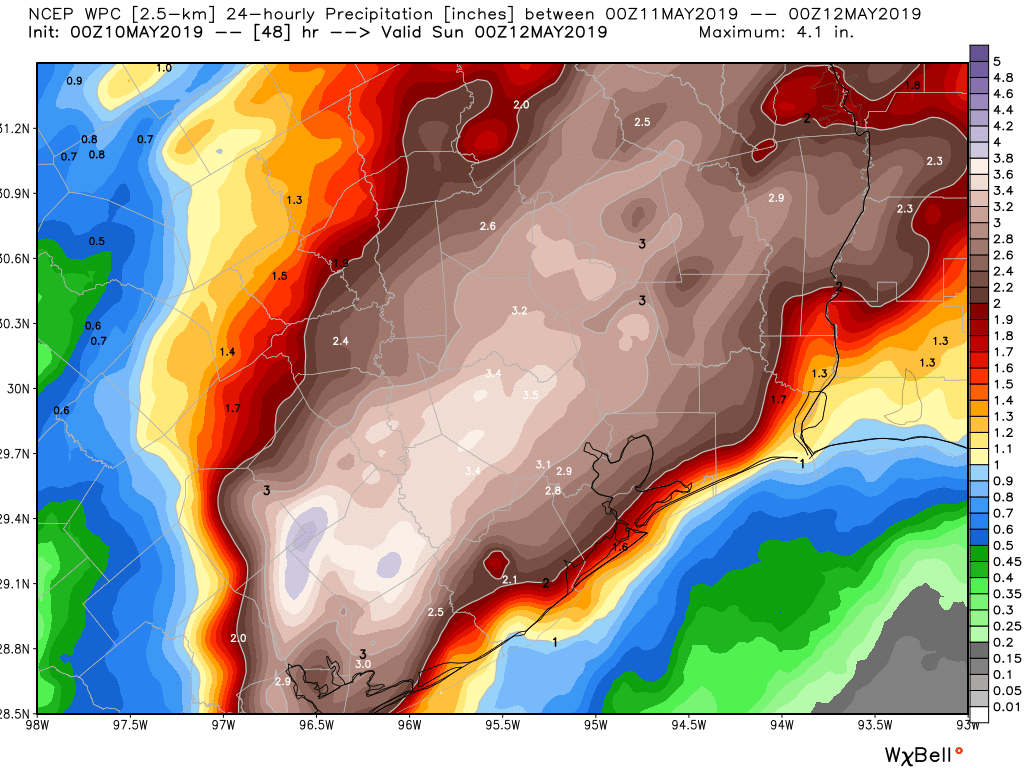 New rainfall expected tonight and Saturday should be on the order of 1 to 3 inches on average, with some higher amounts possible. (NOAA via Weather Bell)

When the showers and storms taper off Saturday afternoon or evening, an additional 1 to 3 inches of rain will be possible. Some higher amounts can’t be entirely ruled out, but rain totals should be a little more under control here than they have been. Still, given that the ground is saturated, this will likely convert almost entirely to runoff as it falls. So flooding may again be an issue for some parts of the area.

The good news is that the rain should begin to wind down Saturday evening and clear out.

We look to have a nice 3-day stretch of weather from Sunday through Tuesday. High temperatures should be in the low-80s, with low temperatures in the mid-60s on average. Some outlying locations may be able to sneak into the low-60s or even upper-50s on Monday morning. All three days should be partly to mostly sunny, with our next rain chance perhaps kicking in by Wednesday.

Eric will have an update for you later today to freshen up for tonight’s rain.

33 thoughts on “Still some rain to get through, but a break on the way for Houston”