Good morning. We hope you enjoyed the holiday weekend, a three-day one for many of us, because Mother Nature served up some spectacular spring-time weather. This week will have some nice moments, too, but it will also come with a chance of storms on Tuesday afternoon and evening.

Today will be mostly cloudy and muggy for Houston, with high temperatures in the low 80s. While moisture levels have inched back up, we don’t expect too much in the way of rain showers due to a capping inversion (warmer air aloft) that should keep a lid on all but isolated to scattered rain showers. Tonight will be quite warm again, with most areas probably not falling below 70 degrees.

Here’s where things become a bit more interesting. Most of the day will probably be a lot like Monday, which is to say cloudy with highs in the low 80s. However, as a cold front approaches the area later on Tuesday, the cap seems likely to break, which will allow for a brief period of storms. This probably will take the form of a line of storms advancing through the region pretty rapidly. 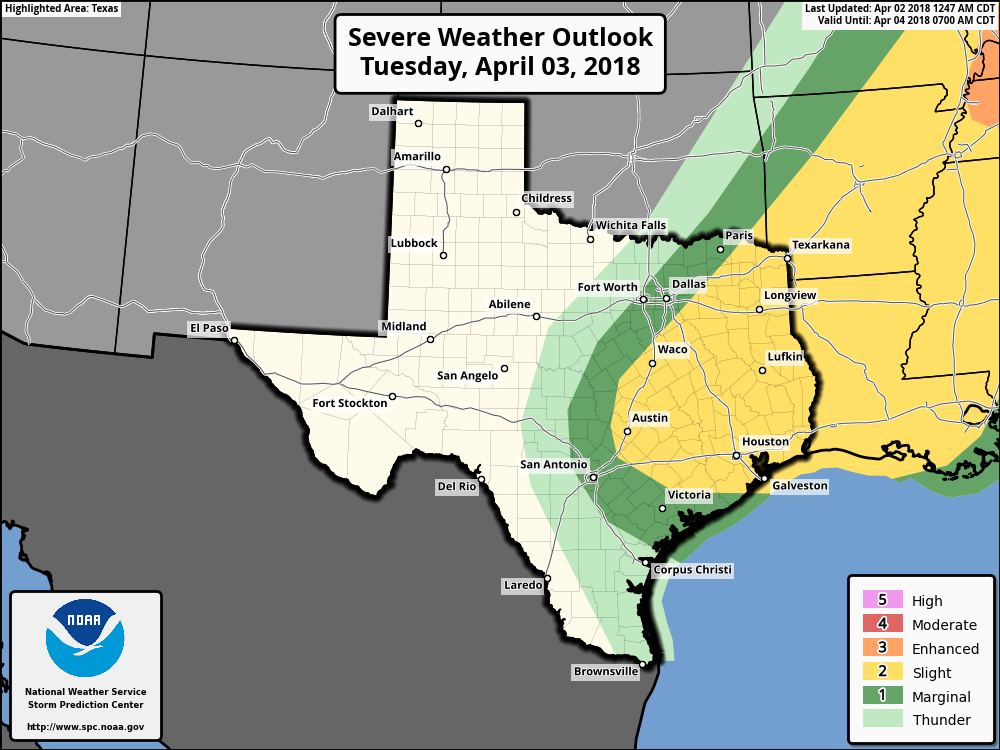 Our best guess right now is that, between about 5 and 9pm on Tuesday, there is the potential for some brief, heavy thunderstorms, along with a chance of hail and damaging winds. The conditions are not going to be as favorable as we saw last Wednesday night and Thursday morning for significant storms, so we don’t have that great of an overall concern. For now it’s probably enough to know that the evening commute, and any outdoor events later on Tuesday and during the evening hours, have the potential to become disrupted. Rain accumulations of less than 1 inch are likely for most.

A fairly blustery day, as winds gust out of the north at up to 20mph. Mostly sunny skies, with highs in the low 70s. Wednesday night will be fairly cold for Houston, with some areas north of the city probably dropping into the 40s, and the rest of the region falling into the 50s. I don’t think there will be that many more nights this cold, this spring. Perhaps none. 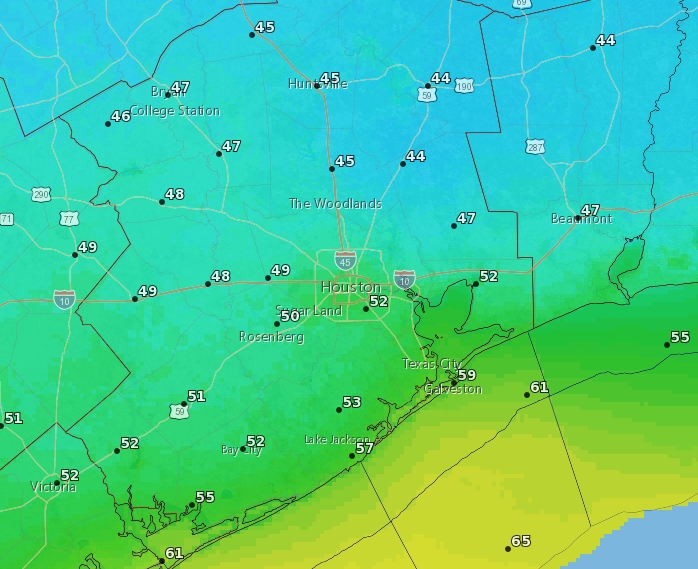 Forecast lows for Thursday morning will be the coolest of the week. (National Weather Service)

A really nice day, with mostly sunny skies and highs in the 70s. But as the onshore flow returns, temperatures by Thursday night will probably be a good 10 to 15 degrees above the night before.

The weekend forecast is hard to pin down right now. Some rain chances return Friday, along with humidity. Then, another cold front will approach the region, but there are questions as to whether the front makes it all the way through, or stalls in the vicinity of Houston. This will have a lot to say about our weather for the weekend, along with rain chances, and I just don’t have much confidence right now. Tomorrow, hopefully, will provide a little more clarity.

2 thoughts on “Some storms possible Tuesday, and weekend weather uncertain”