We’re definitely in the midst of spring storm season. After an active night last week, we have the potential for more storms this evening, and perhaps again this weekend. So it goes in spring, along the warming Gulf of Mexico coast.

We’ll see another warm, mostly cloudy day with highs reaching into the low 80s. Although there is the potential for some scattered showers across the region, the heavier storms are probably going to hold off until the late afternoon or evening hours. A cold front, and an associated area of disturbed weather should move into the Brazos Valley during the afternoon hours, and probably will move into Houston sometime after 7pm. The entire system should move off the coast by around midnight.

Rain accumulations for most of the city should average between 0.5 and 1.5 inches. The primary concern, therefore, is that some of these storms could be severe, with damaging winds or hail. If you’re out and about this evening, such as coming home from the Astros baseball game, this storm could catch you out. Take care. 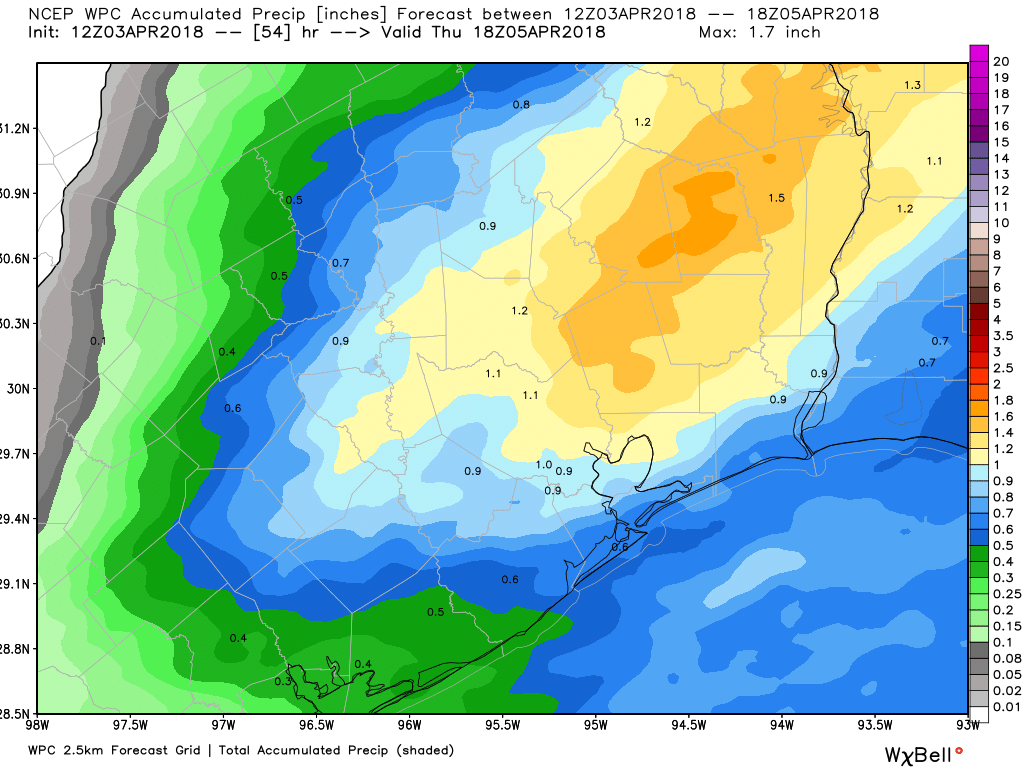 Sunny and significantly cooler and drier in the wake of Tuesday night’s cold front. Highs in the low 70s, with a noticeable wind out of the north. Temperatures on Wednesday night should fall into the upper 40s for the northern half of Houston, while remaining in the 50s for areas closer to the coast.

A nice day, with partly sunny skies and highs in the mid-70s. Temperatures Thursday night will be about 10 degrees warmer as the onshore flow rebounds, and humidity levels begin to rise again.

Will it or won’t it? That’s the big question heading into the weekend, and it concerns the approach of another cold front into the Houston region. We can be pretty confident in Friday’s weather, with the expectation of highs in the low 80s, with mostly cloudy skies, and a chance of mostly moderate, scattered rain showers. Then, the forecast models suggest a slight uptick in rain chances on Friday night and Saturday morning, with the area perhaps getting a few tenths of an inch of rain.

After this, the cold front either moves through Houston and off the coast, or stalls. At this point I’m leaning toward “Team offshore,” which would give us drying and cooler conditions later on Saturday—70s, perhaps. This has the potential for a totally acceptable weekend, with perhaps some partly sunny skies later on Saturday (no guarantees!) and a partly to mostly sunny Sunday. If the front, instead, stalls over Houston then it will be grayer, warmer, muggier and probably rainier.

2 thoughts on “Storms possible later this evening, weekend may be pretty nice”