Happy New Year! As expected, New Year’s Eve brought a lot of moisture into the Houston region, but the rain moved out before the beginning of evening festivities during the evening, leaving behind a foggy, humid, and misty day to start 2017. More rainfall is on the way, however, with the potential for some severe weather late tonight and Monday morning.

Dewpoint temperatures this morning are in the 50s, and although conditions are calm at the surface, about a mile up into the atmosphere south-southwesterly winds will be increasing today, rising to about 50 mph in the lower levels of the atmosphere by Monday morning. This will both bring lots of moisture and shear into the area late tonight and on Monday—setting the stage for some severe weather. The most likely time for storms will occur from after shortly after midnight tonight through noon Monday, with storms moving fairly rapidly from west-to-east. 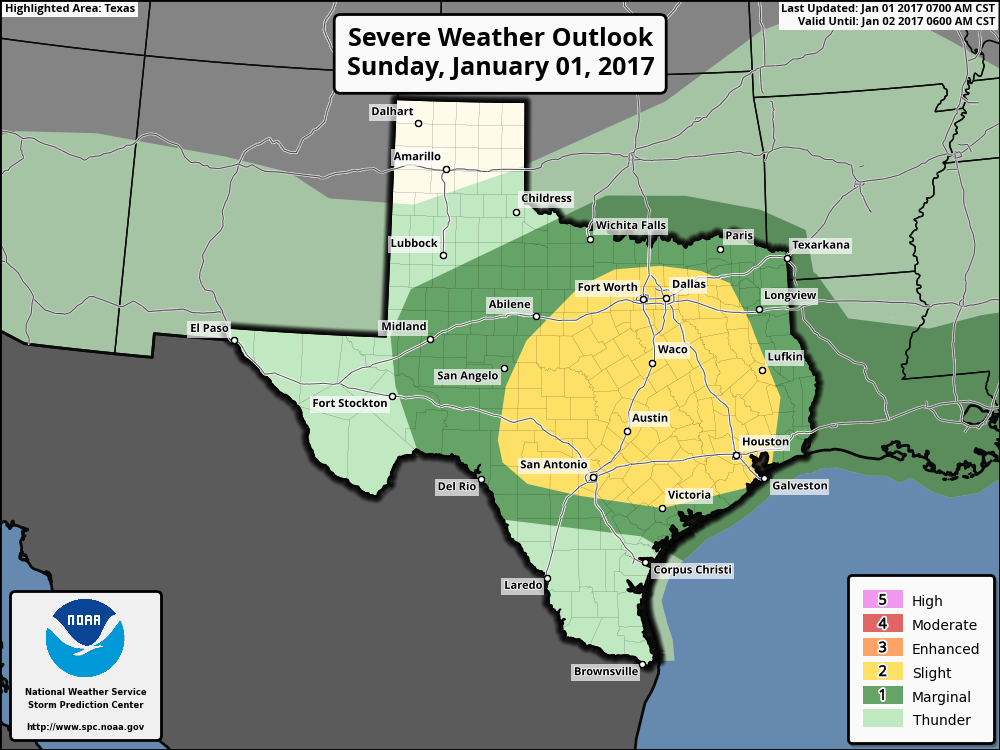 Storm outlook for Texas on Sunday and Monday morning. (NOAA)

The primary threat will come from severe thunderstorms, damaging winds, hail and potentially a few tornadoes. Better chances for storms and higher rain accumulations will come north of I-10, where some areas may see 1 inch or more of precipitation.

As storms move out of the area by late Monday morning, skies will clear out and highs should rise to nearly 80 degrees. Cooler, drier air will arrive by Monday night, with a reinforcing shot of colder air later this week. How cold temperatures get by Friday or Saturday morning is not entirely clear, but forecast models have backed off the idea of an Arctic surge driving lows into the 20s.

We’ll update tomorrow morning with a comprehensive look at the week ahead, and out first forecast for the 2017 Houston Marathon.

Posted at 9 am CT on Sunday by Eric

3 thoughts on “Storms possible tonight and Monday morning in Houston”