Storms are rolling through Houston this morning, along a front that will bring intermittent thunderstorms. The primary concern during the morning hours, until about noon, will be brief periods of heavy rainfall—but we don’t anticipate any severe weather such as hail or tornadoes. Some areas of west Houston have received as much as 1 inch of rain as of 5:45am this morning, and an additional 0.25 to 0.75 inch is possible this morning. Very briefly flooded streets are the only real concern. High resolution models show this system clearing from 9am to noon, from west to east, across Houston. 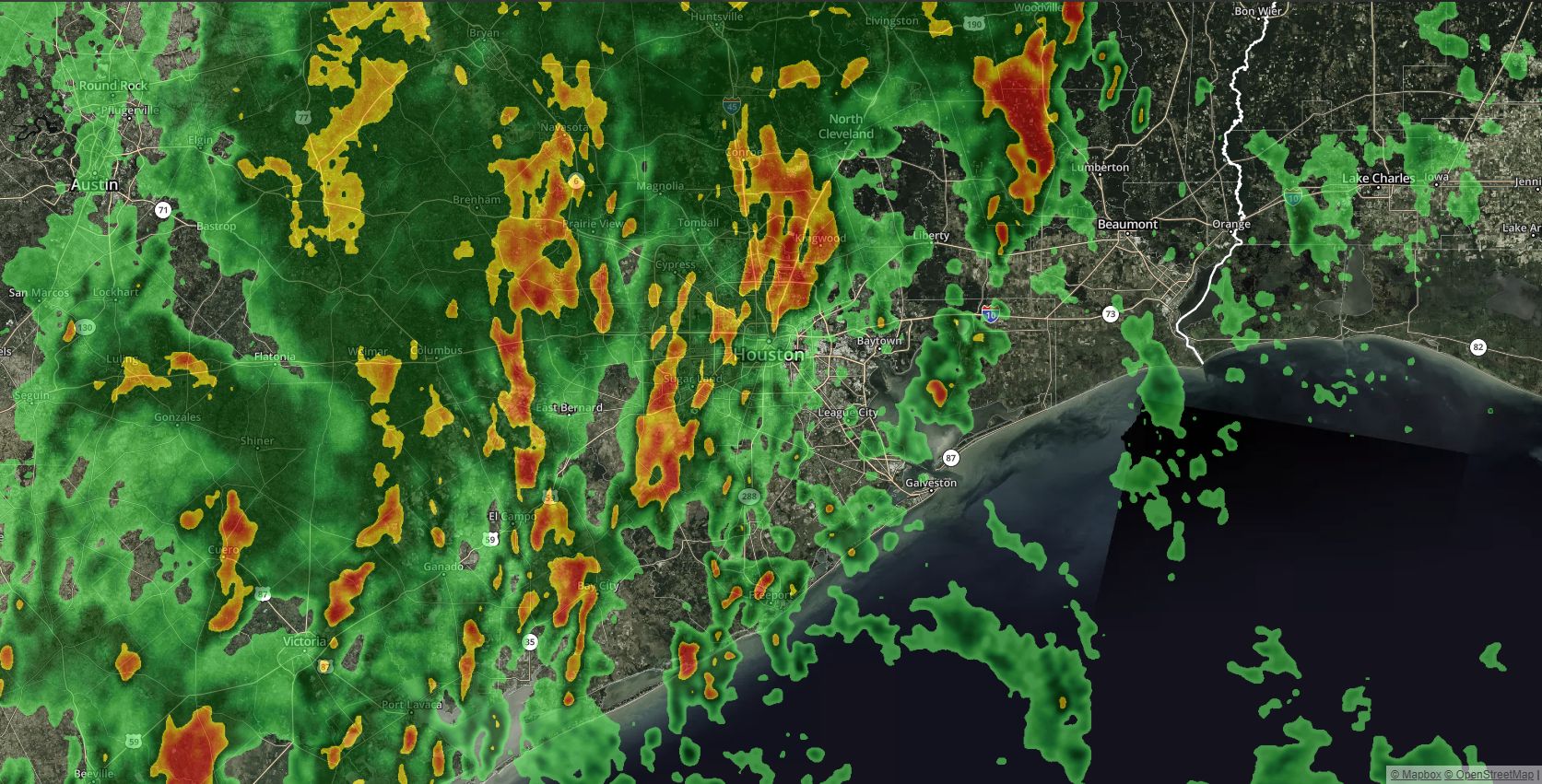 Today will be a day of two parts. After this morning’s showers and thunderstorms, we’ll see strong, northwesterly winds move into the region from the west that could gust up to 25 mph this afternoon. Skies should clear out, and depending on how much sunshine the area receives, highs could get up to around 80 degrees. Conditions tonight should be breezy, with mostly clear skies, and highs generally in the 50s across Houston. Winds again will be the story, with gusts perhaps up to 30mph, especially for coastal areas. 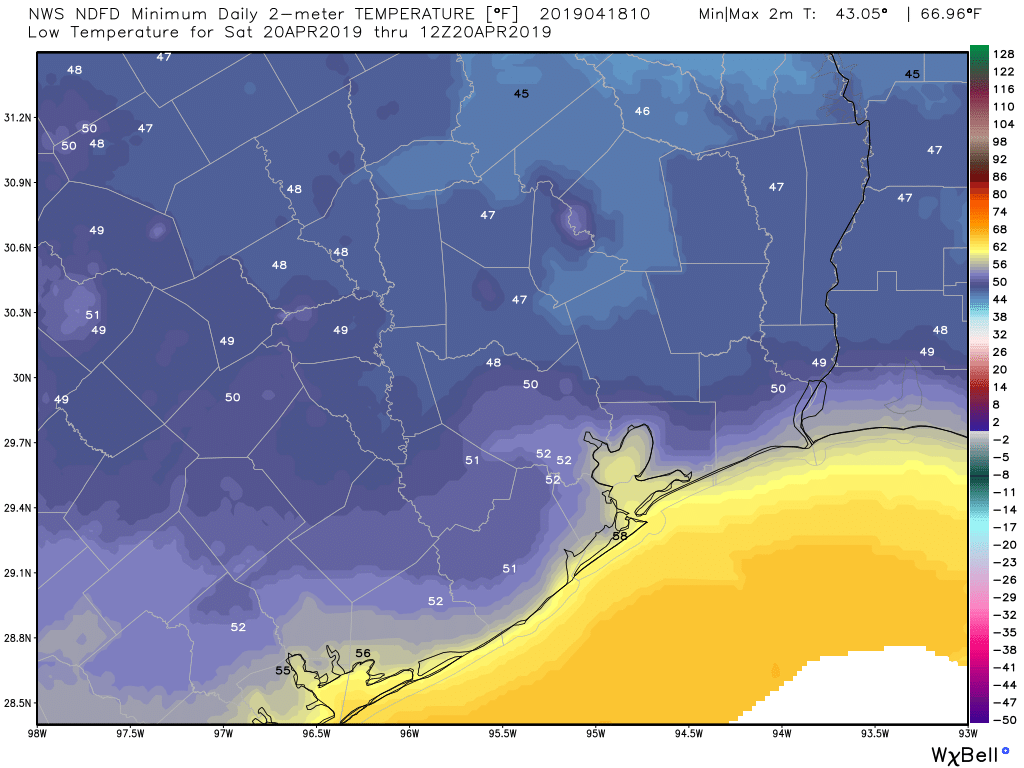 This will be a sunny, breezy, cool (for April) day with high temperatures likely in the mid-70s. We could see some wind gusts during the afternoon hours in the 20-25 mph range, but otherwise the weather should be splendid, with dry northerly air. Lows Friday night may fall into the upper 40s for well inland areas, but likely will be around 50 for most of the area.

A splendid day, with highs around 80 degrees, and sunny skies.

This day will be a bit more humid, but should feature mostly sunny skies, highs in the low 80s, and slight southerly wind from the Gulf of Mexico. Temperatures will be considerably warmer Sunday night, in the mid-60s. 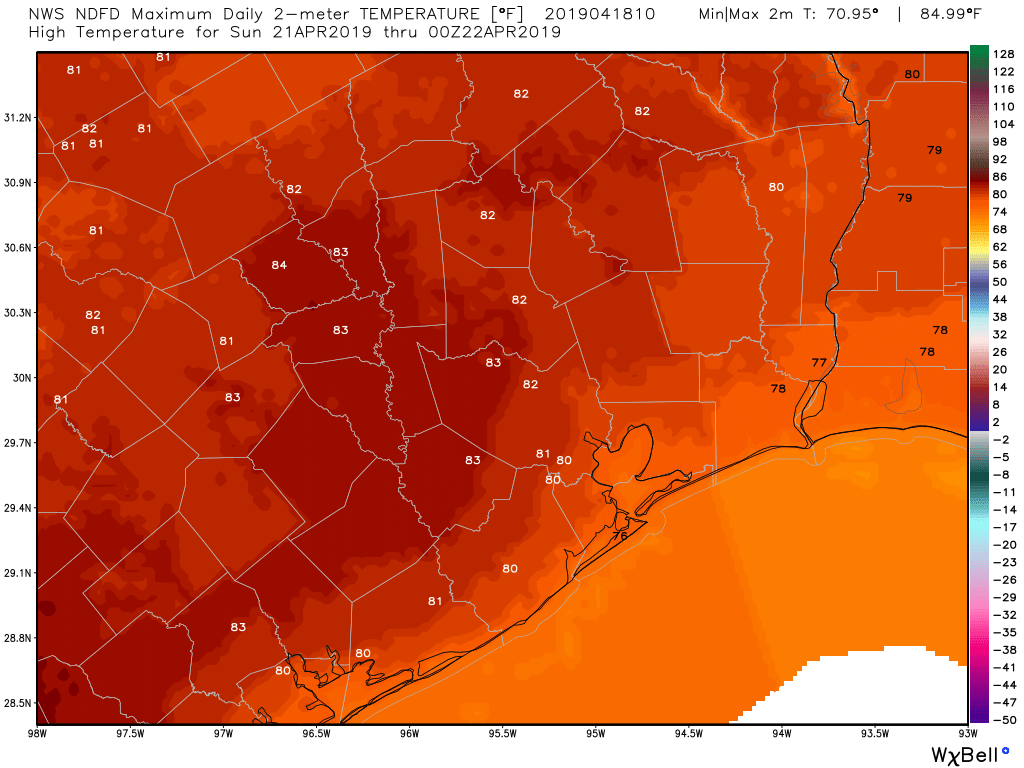 Monday and Tuesday will see the return of some light rain chances, before we face the possibility of some heavier rainfall around Wednesday or so—maybe on the order of 1 to 3 inches, it’s hard to say as an upper-level storm system plows across the central United States. Eventually some sort of cool front may drag through, but I’m not sure how much cooling it will bring. Expect highs around 80 degrees, give or take, for most of next weekend.

Looking ahead to the weekend of April 27 and 28, we’ve had a lot of questions about outdoor conditions due to the BP MS 150 ride from Houston to Austin, as well as the big IRONMAN Texas event in The Woodlands on the 27th. The good news is that, at least for now, the rainfall the models are forecasting for next week appears to come to an end before the weekend. Temperature wise, there’s a wide variance, but for now the most likely range for highs is 80 to 85 degrees, with lows somewhere in the 60s. I know winds are critical for these events, but right now I have no confidence in that forecast.

5 thoughts on “Storms rolling through Houston, should clear area by noon”