After officially hitting 68° yesterday morning, Houston has outdone itself this morning. We are down to 66° for a low as of this writing. That’s just 1 degree shy of today’s 125 year old daily record low. Unfortunately, we probably won’t get there now, but we made a valiant effort! 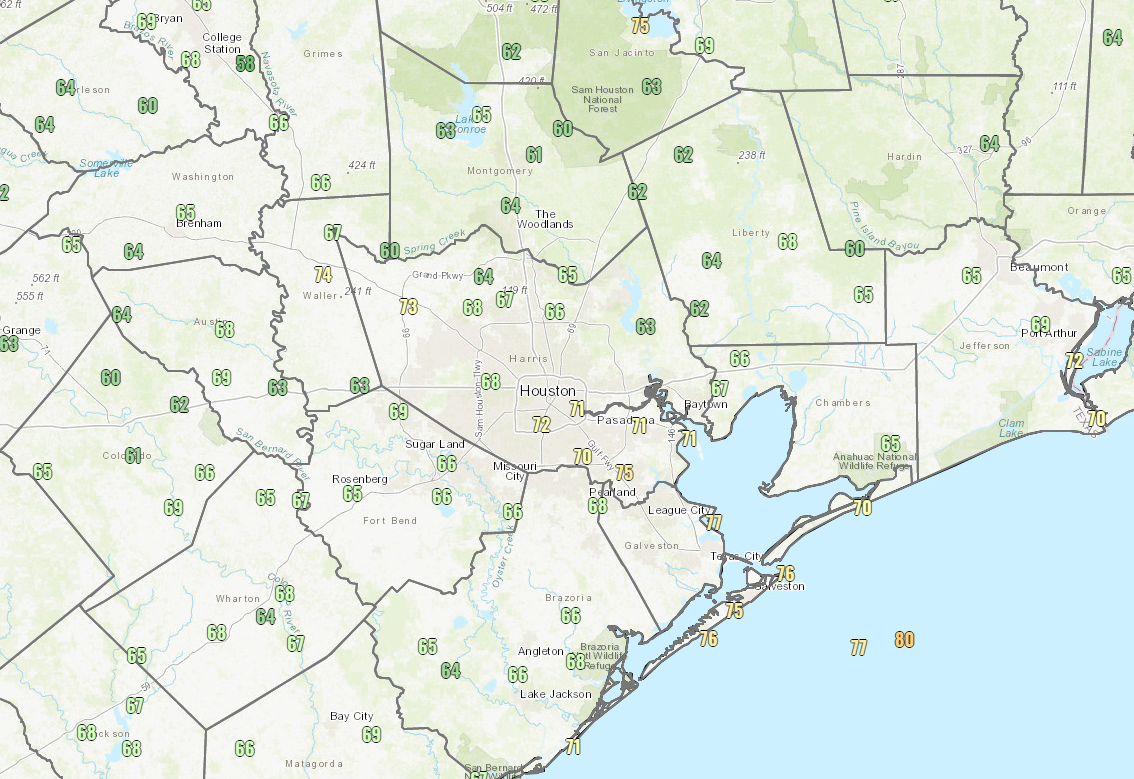 Low temperatures as of 6:30 AM Thursday are really impressive and really nice for July. (NOAA)

Widespread 60s were recorded across the area this morning. Closer to the coast, we’ve only been able to muster low- to mid-70s, but it still feels better than it normally would this time of year. The last time it was at least this cool in July was back in 1994, when we managed to hit 64° on the 29th.

Look for beautiful weather today once again. We expect wall to wall sunshine with high temperatures approaching 90 degrees, though with much lower humidity than usual for late-July. Today will be an ozone action day unfortunately; when we get these clear, dry air masses this time of year, it allows ozone to form. So consider air quality today “unhealthy for sensitive groups,” and be sure to take it easy if you need to on days such as this.

Tomorrow will begin our transition back to high summer. Look for another nice day with ample sunshine, but the humidity will slowly increase. Friday morning won’t be as delightful as the prior couple mornings, but it should still only be in the low-70s here in Houston. Look for mid- or upper-70s at the coast, and a few lucky far inland places may start Friday again in the 60s. Afternoon temperatures should be firmly back into the low 90s.

Our area will see an increasing chance of afternoon showers and thunderstorms this weekend. Onshore flow will resume more aggressively later Friday, and this will bring moisture back into our area. Right now I think Sunday may have a slightly higher chance of rain showers than Saturday, but both days should see scattered storms around. Total rainfall amounts will vary: Some places could see up to an inch or so, but most places should see a quarter-inch on average. A few spots will see no rain at all. Look for highs around 90 or in the low-90s and lows in the middle or upper-70s

The forecast looks pretty straightforward right now. Expect a mix of sun and clouds each day with highs in the low-90s or mid-90s. Morning lows will only get into the mid- to upper-70s. There will be varying degrees of shower chances each afternoon along the sea breeze, but no significant weather is expected.

While the National Hurricane Center continues to monitor the remnants of our cold front in the Gulf, they are not expected to develop in any meaningful capacity over the next few days. Any impacts would be limited to scattered thunderstorms along the Gulf Coast. 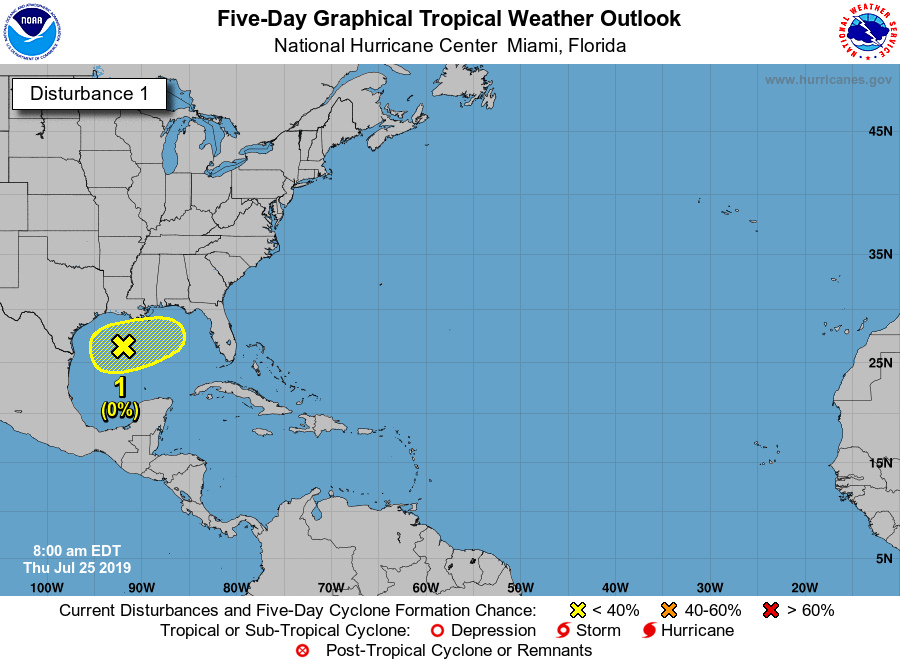 While the NHC continues to monitor the remnant cold front in the Gulf, development is not expected, and the tropics look mostly quiet through the next 7 to 10 days. (NOAA)

Elsewhere, the tropics are quiet, as the Atlantic Basin is still loaded with dust or wind shear, both elements that will work against tropical development. We expect the next 7 to 10 days to be without much noise in the tropics. Things should begin to gradually pick up after that point, as we head into the marathon of peak season.

8 thoughts on “Sublime summer weather for another day”