Thursday was officially the hottest day of 2020 so far. We topped off at 98º yesterday at Bush Intercontinental Airport and 96º (good for second hottest) at Hobby. The forecast for the next week is what we in meteorology call a “persistence” forecast. It is what it sounds like. Today will be a similar version of yesterday. Tomorrow will be similar to today. And so on. While it makes for easy forecasting, it can get old fast, especially when it’s this hot. Alas, let’s focus on those temperatures.

We will call it partly to mostly sunny through Monday. Upper air temperatures slowly escalate today and tomorrow. They should peak on Sunday and Monday, supportive of high temperatures in the low-100s for Houston. Inland areas will be slightly hotter, while coastal areas should do the mid-90s. Overnight lows struggling to get much below 80º will compound the intensity of the heat. Coastal areas likely will not drop below the low-80s.

Heat index, or what it feels like when you combine the heat and humidity will top off in the upper 100s to mid-110s this weekend. Heat Advisories are likely all weekend. (Weather Bell)

In terms of heat index values, it will be all the worse. Look for our heat indices (or “feels like” temperature if you prefer) to top off around 105º to 110º today and tomorrow afternoons, if not a little hotter. It is possible that we will see heat indices peak in the 110º to 115º range on Sunday and Monday. It’s going to feel miserably hot. A Heat Advisory will go into effect at Noon today, and we will likely see it reissued for Saturday, Sunday, and Monday afternoons. We don’t often talk about heat safety here because, let’s face it, it’s always hot here in summer. This will be next-level sort of heat, even for us, so please remember to drink plenty of water, check the backseat before locking, limit outdoor time in the afternoons, and check in on your neighbors that are elderly or vulnerable.

The thermometer is going to take its foot off the gas after Monday. While Tuesday through Thursday should still be plenty hot, look for high temperatures to de-escalate from the low-100s back into the upper-90s. Rain chances appear to remain close to zero through Thursday. Our next real chance of some kind of rain is likely not until next Saturday or so.

Another one bites the dust

Tropical Storm Fay formed yesterday afternoon, becoming the earliest “F” storm (or 6th named storm) on record in the Atlantic Basin. It broke the record previously held by Franklin on July 21, 2005. It also would have broken the old record for earlier “E” storm too had Edouard not beat it to the punch this past weekend. As we’ve noted, in terms of intensities of these storms, 2005 blows this year away, as all of this year’s storms have basically been middling tropical storms thus far. We will discuss this some more in Tuesday’s tropical update. 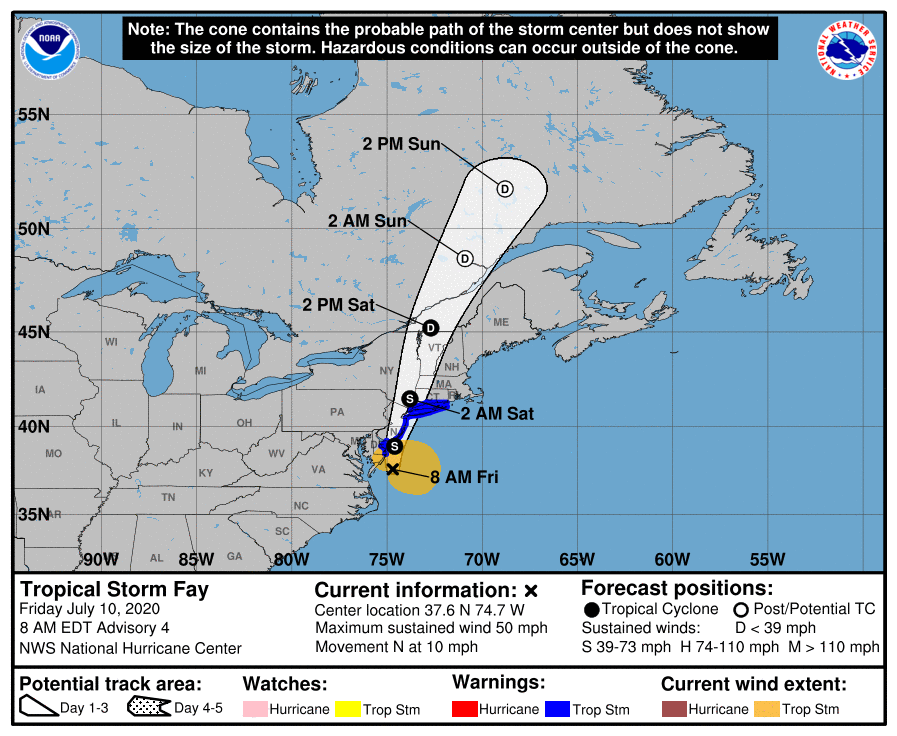 Tropical Storm Fay has some gusty winds but should not cause any serious widespread problems in the Northeast. (NOAA)

Fay will deliver a dose of gusty winds and heavy rain to the Northeast Corridor, with flood watches hoisted from Delmarva through southern New England. Up to 4 to 6 inches of rain is possible in some locations. Overall, Fay should be equivalent to a moderate nor’easter with a bit more rain, so no significant problems are expected up that way.

For those curious, the earliest “G” storm (7th named storm) also occurred in 2005 and was Gert on July 25th. As of now, we don’t see any legitimate candidates for tropical development over the next 7 to 10 days or so.

9 thoughts on “Summer’s sizzle slogs along for Houston”