Good morning. Today’s post will be fairly brief, as I went in depth rather significantly on weekend snow chances yesterday, and we will be keeping you posted this weekend. To be quite frank, not much has changed since yesterday’s post, although trends overnight were slightly warmer. But still, let’s jump in.

Not much weather to speak of over the next 24 to 36 hours. Today will see a bit of low cloud cover in parts of the area this morning give way to mostly sunny skies. Look for highs in the mid-50s. Tonight will see clear to partially cloudy skies with lows in the 30s and 40s. High clouds may dim the sun a bit tomorrow, but otherwise, it will be a mainly nice day with highs once again in the mid-50s.

So the forecast for Sunday looks mostly on track with the big picture details being cloudy skies to start with rain developing from west to east through the late morning and afternoon. The thought right now is that basically the entire area from the coast through Conroe (Highway 105) will begin as rain. As the atmosphere cools later Sunday afternoon and evening and the rate of precipitation increases, that’s when we’ll start to likely see some snow reports begin to trickle in from places like Huntsville or Lake Livingston or College Station. It’s possible a few locations farther south closer to Houston see snow mix in if it rains hard enough Sunday afternoon. 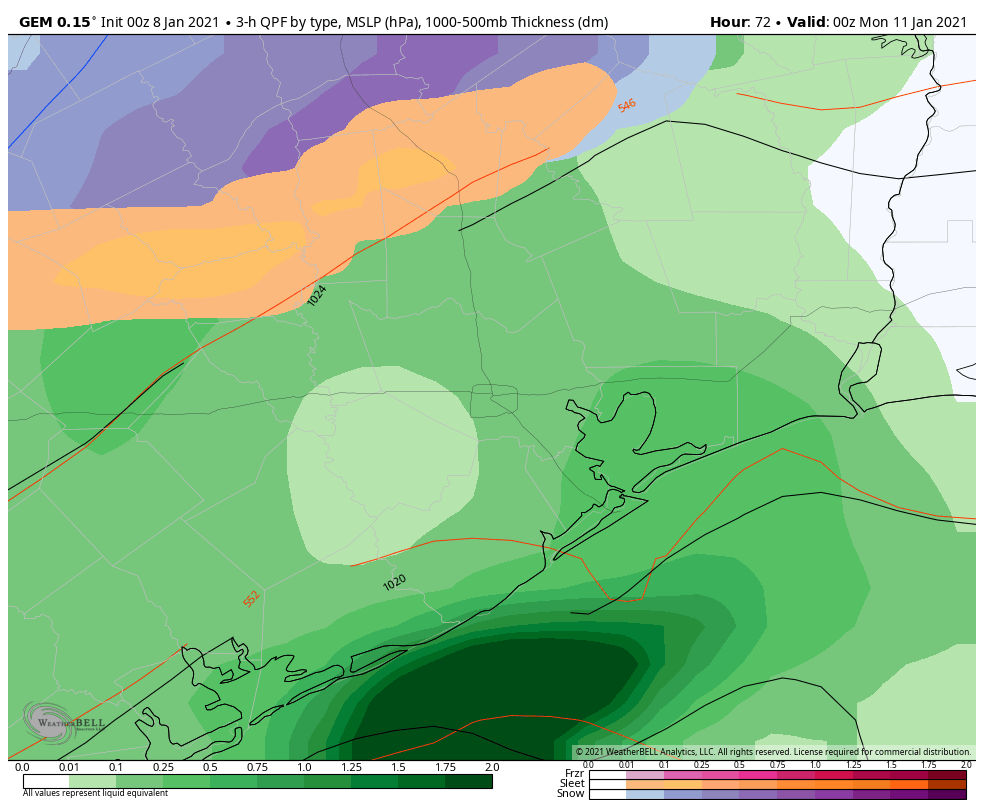 One model (Canadian) depiction of what might be falling at 6 PM on Sunday, with rain for most of Harris County and south of I-10, but mixed rain and snow as you go north of Harris County, and mostly snow perhaps north of Highway 105. (Weather Bell)

As we go deeper into Sunday evening, watch for more snow reports to come in from places even farther south, more into Conroe or The Woodlands or Tomball out into Cleveland and Liberty. Rain may turn to mostly snow in some of those places before ending after midnight. And perhaps the rain will end as some light snow in Houston also after midnight.

Will snow accumulate? As of right now that seems very unlikely in the city of Houston and most of Harris County and surrounding counties to the west, south, and east. For Montgomery County and points north from there, yes, snow might accumulate a bit. Right now I wouldn’t expect more than an inch or two, mostly on grassy surfaces and trees, but we could see more in spots depending on how things come together. Slick road conditions are indeed possible up that way Sunday night and Monday morning.

As of Friday morning, the snowfall forecast for Texas shows a wide band of 4 to 8 inches of snow to the north and west of about Waco, with snow totals dropping into the 1 to 3 inch range east of I-35. Again, this too could change. 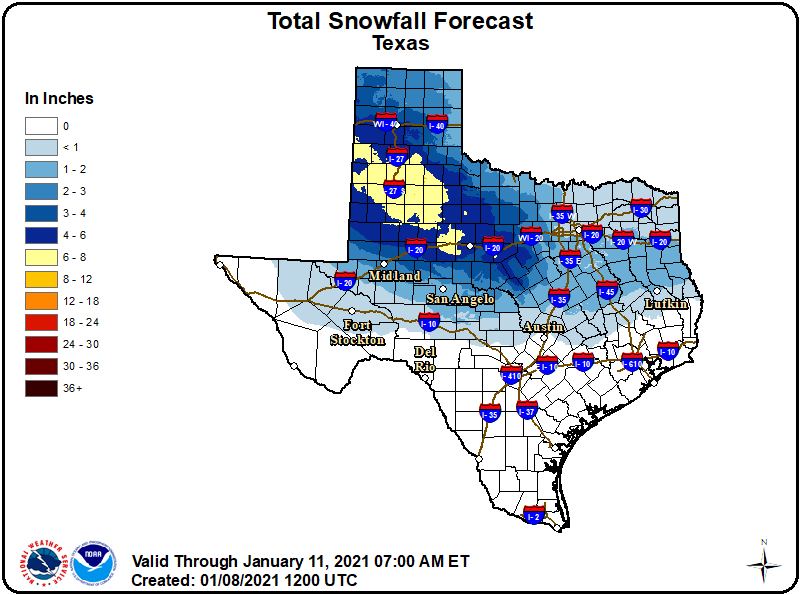 The current snowfall forecast calls for 4 to 8″ of snow over a wide swath of West Texas, with totals dropping to 1 to 3 inches as you get east of I-35. (NOAA)

Once more, we have to underscore that because storm tracks matter a lot and a few miles can make a world of difference, there is still substantial uncertainty surrounding this forecast. Much may change by Sunday morning. We’ll keep you posted this weekend. I mean, can you tell that I’m excited by this? Has it shown at all?

Again, in addition to the snow aspect of things, there will be locally heavy rain (up to an inch in spots, more perhaps near the coast) but probably no serious flooding. Thunderstorms are possible. And coastal issues, such as rip currents, rough seas, strong winds, and even some tidal flooding will be possible also.

Monday and next week

Look for clouds to hang tough on Monday behind the storm, with cold and windy conditions. Clouds clear for Tuesday, Wednesday, and probably Thursday. Look for temps to rebound into the 50s and eventually 60s. Morning lows in the 30s Monday morning (and perhaps a freeze north of the city) will rebound into the 40s by midweek.

13 thoughts on “Sunday snow risk remains low in Houston, but still a lot of uncertainty”