Rainfall has been a challenge at times since late 2019 across the area. We are finally beginning to transition into true spring here, and April showers will bring most of us a decent helping of rain over the next few days.

I’m going to do this post a little different than we usually do today, partly to make it easier to explain what we’re watching and when.

Today: Showers and thunderstorms develop north and west of Houston. Severe weather is possible west of our area, with lower chances as you get closer to the Houston Metro.

Tonight: Showers and storms drop south and east into the Houston area this evening. Some storms could be strong to severe, especially west of Katy or Cypress. Heavy rain is possible, mainly early.

Saturday: Showers and thunderstorms possible at any time through the day, possibly most concentrated near sunrise and again in late afternoon. Heavy rain possible, especially south of Houston. Severe weather is not likely. Cooler.

Sunday: Showers possible, but likely a much calmer day.

Now, we’ll walk you through the various concerns of this event. Let’s start with the severe weather aspect, because that seems to be what we get the most questions about. The Storm Prediction Center has highlighted areas mainly northwest of Houston today for the risk of severe storms. 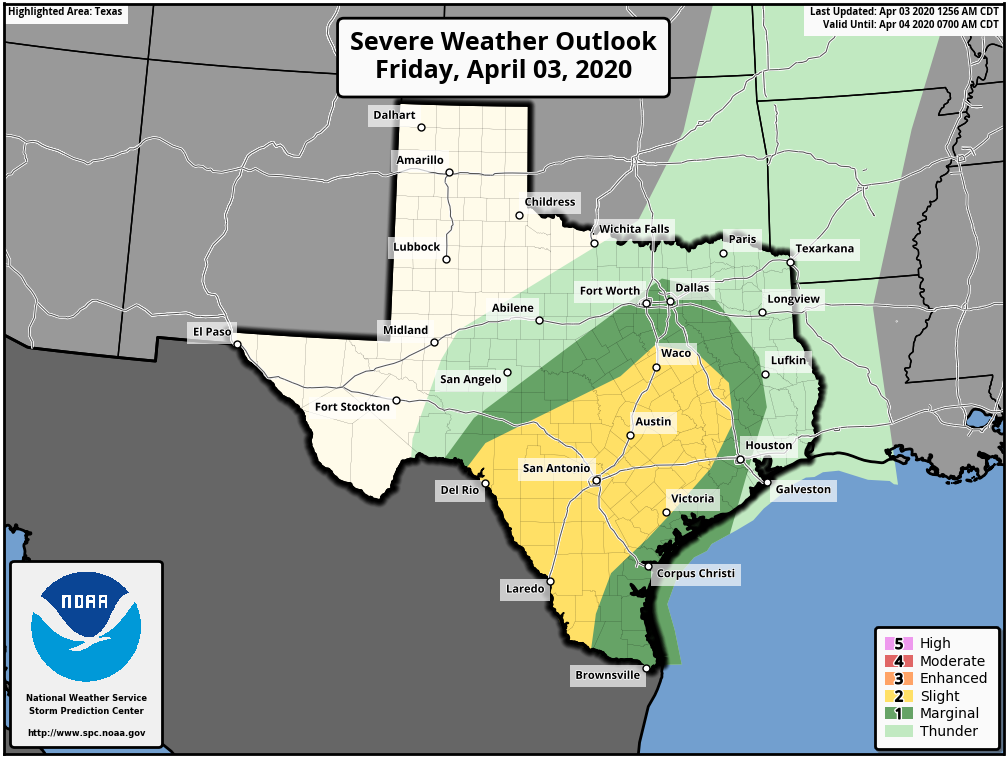 Severe weather, especially large hail or strong wind gusts will be most likely toward Austin or San Antonio today. Some of those storms could get into western parts of the Houston area by evening. (NOAA)

The highest risks today will likely be 1.) hail and 2.) wind. Storms will be capable of some big hail, especially as you go west of Houston and closer to San Antonio and south of there toward Laredo. Strong wind gusts will be possible if the storms can organize more into “lines” at some point, and I expect that would be the primary thing to watch for the west side of Houston. We could see a line of storms approach by evening, which would be capable of those strong winds. As severe weather events in Houston go, this one doesn’t look especially serious, but as always, it’s something we will monitor.

It is no secret that it has been dry in parts of our area in recent months. This is especially true as you go south and west of Houston. While Houston has seen roughly 50 to 75 percent of normal rainfall in 2020, places like Victoria and Corpus Christi have seen even less, more like 25 to 50 percent of normal. Thankfully, that provides us a little padding to absorb some of the initial heavy rains from this event. In general, heavy rainfall is likely in spots this evening, especially north of I-10 and west of I-45 initially. That could transition a bit south and east of there as the evening goes on, but storms would likely begin to weaken and rainfall rates should slow a bit. We should be able to handle today and tonight’s first wave with nothing worse than some minor street flooding or ponding on roadways. 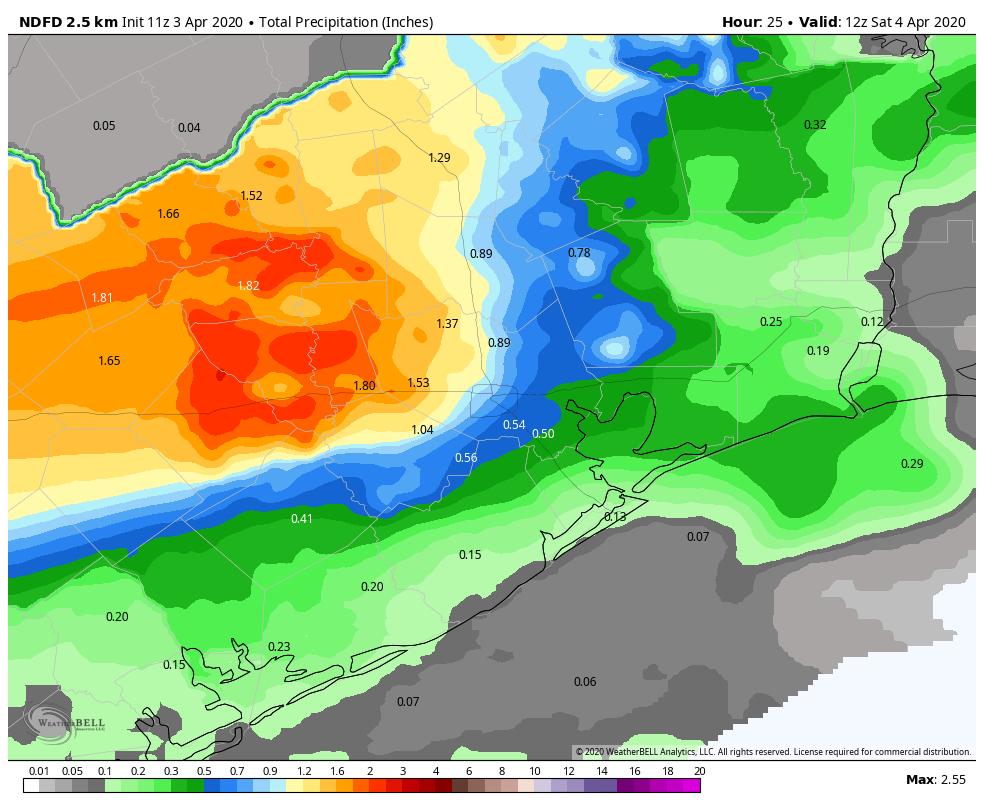 Total rainfall by 7 AM Saturday should be heaviest off to the north and west of Houston, with some places south and east seeing little to no rain by this point. (Weather Bell)

Overall, rains should slow overnight and possibly fizzle out as they get closer to the coast.

Saturday’s rain will focus farther south than what we see today. The front will likely be through Houston (more on that below), which means showery weather should dominate much of the day. Closer to the front and coast, we should see thunderstorms try to develop, and that’s where heavier rain would be most likely late Saturday afternoon and evening. 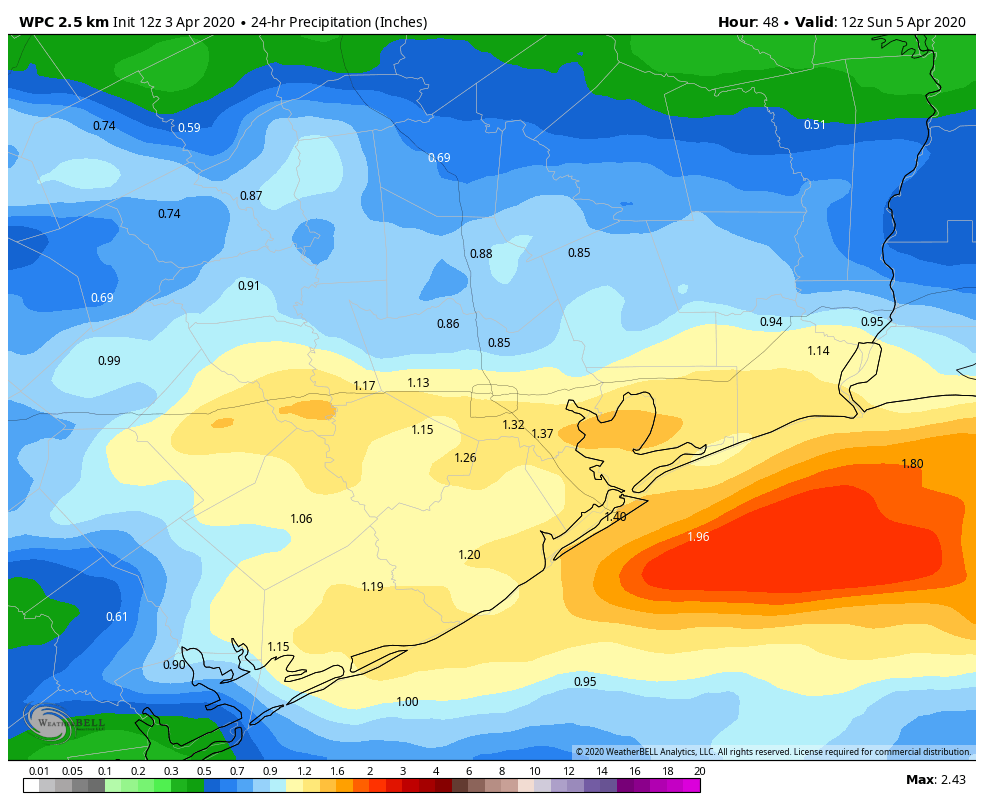 Additional rainfall forecast between 7 AM Saturday and 7 AM Sunday will focus south and east of Houston. (Weather Bell)

Total rainfall when all is said and done Sunday morning should be on the order of 0.5 to 1.5 inches on average, with higher amounts, closer to 2 or 3 inches in spots, especially north and west of Houston or closer to Galveston and Matagorda. A quick note on Galveston: With elevated tides expected this weekend, you might notice slower drainage than usual. Most folks will be staying at home anyway, but if you do have to venture out late tomorrow, just keep that in mind.

While flash flooding is mostly a minor concern for us right now, we could be talking about some river flooding issues on some of the larger rivers in our region in time. The Navasota River will be sensitive to heavy rainfall today, so that’s one to keep tabs on. Subsequently, the Brazos may begin to rise a bit as all this pushes through the system. I think the Trinity River is the one we’re watching closest for more of a longer-term impact right now, as much of that river is already in at least minor flood. With continued rounds of rain possible into next week, this will be something we watch a little closer in the days ahead.

With clouds today, we should stay at or below 80° for a high temperature. Rain tonight will cool us back into the 60s. Depending on how far through the area the front gets, you could wake up in the 50s on Saturday morning. If the front does get to the coast as expected, Saturday’s high temperatures will be a mess, with 70s south of Houston, 60s in Houston, and possibly only 50s northwest of Houston. Either way, prepare for a cooler outcome on Saturday.

Right now, most guidance seems to suggest a minor shower chance on Sunday but probably nothing too serious. Otherwise, expect a mix of clouds and sun with temperatures rebounding from the 50s or low-60s to the middle or upper-70s.

The forecast becomes a bit more challenging to pin down next week. We will predominantly have a mix of sun and clouds each day with ample humidity. We will have to watch a couple disturbances ripping through the area, any of which could be candidates to produce some storms or locally heavy rain. More questions than answers are in our possession on this right now, so we’ll sort of end it there. 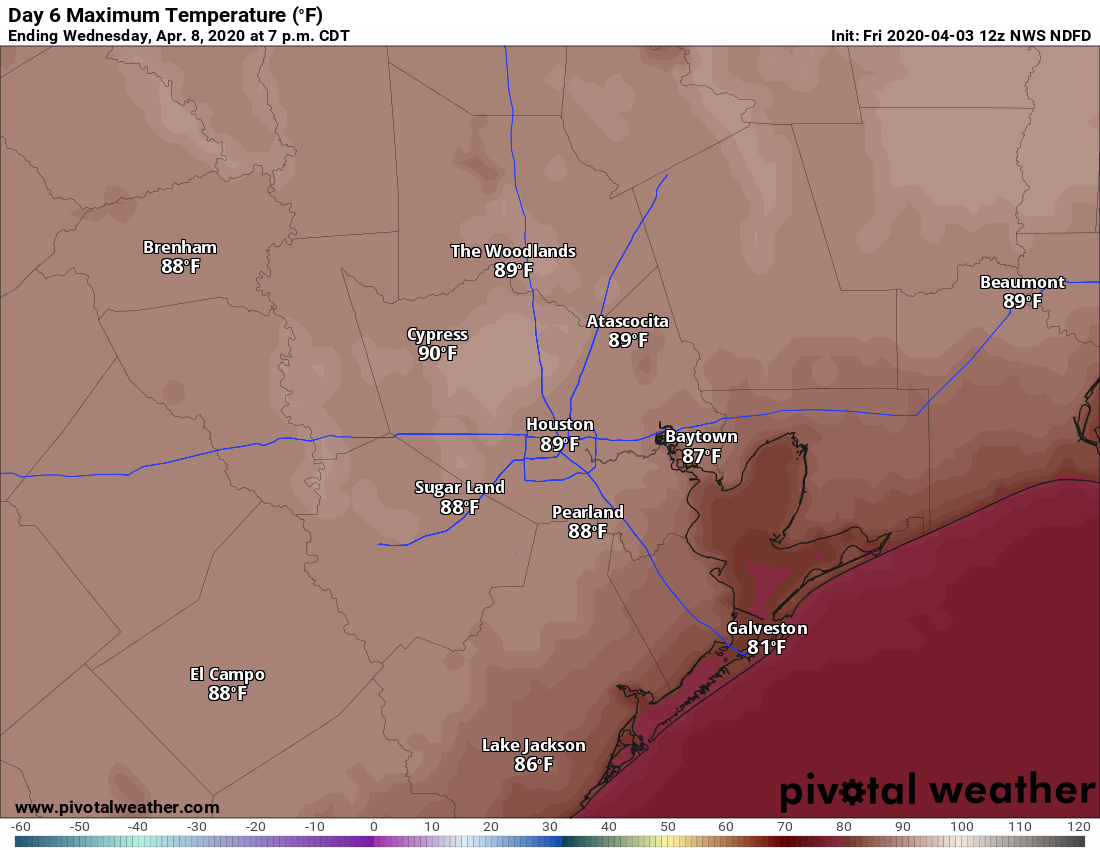 Wednesday’s forecast highs could approach 90° once again over much of the area. (Pivotal Weather)

Without rain, temperatures should surge into the 80s, especially Tuesday, Wednesday, or Thursday when we can’t entirely rule out a 90° reading somewhere.

I don’t want to deep dive into this, but Colorado State issued their first seasonal outlook for hurricane season yesterday. In general, this is the most anticipated seasonal outlook release. They are calling for a slightly above normal season this year with 16 storms, 8 hurricanes, and 4 major hurricanes. That’s all well and good, but we have no idea where those storms will be or when they’ll strike. So for all intents and purposes, you should prepare for hurricane season as you always do. With the world around us in chaos right now, it’s probably more important than ever to consider making a kit early and being prepared for the season if you’re able. The National Weather Service in Houston has a lot of good tips and information from last year’s hurricane guide to get you started.