Good morning. We’re continuing to anticipate the arrival of a cool front late on Friday or Saturday morning, which should make for a rather pleasant early fall weekend across the region. It won’t exactly be cold, but it sure will be less humid. Meanwhile, we’re also anticipating the formation of a tropical storm or depression in the Southern Gulf of Mexico fairly soon—this will have to be watched closely but the forecast for now mostly keeps inclement weather out of the Houston region. More on this below.

The really hot weather is almost over, we promise. And it has been hot. Both Hobby Airport and Galveston again tied heat records on Wednesday with highs of 96 degrees. Temperatures should be about 5 degrees cooler today with partly cloudy skies, and rain chances of 30 percent or so. These rain chances will be driven by an upper-level low pressure system and enhanced by daytime heating. Low temperatures tonight will be in the mid-70s for most.

Friday should be similar to Thursday in terms of sensible weather, but things should begin to change late Friday night or Saturday morning. As Matt wrote yesterday, this will not be a knock-you-off-your-feet front blowing in from the northwest, but rather over the weekend we’ll gradually see drier air moving in. This should become noticeable on Saturday morning. 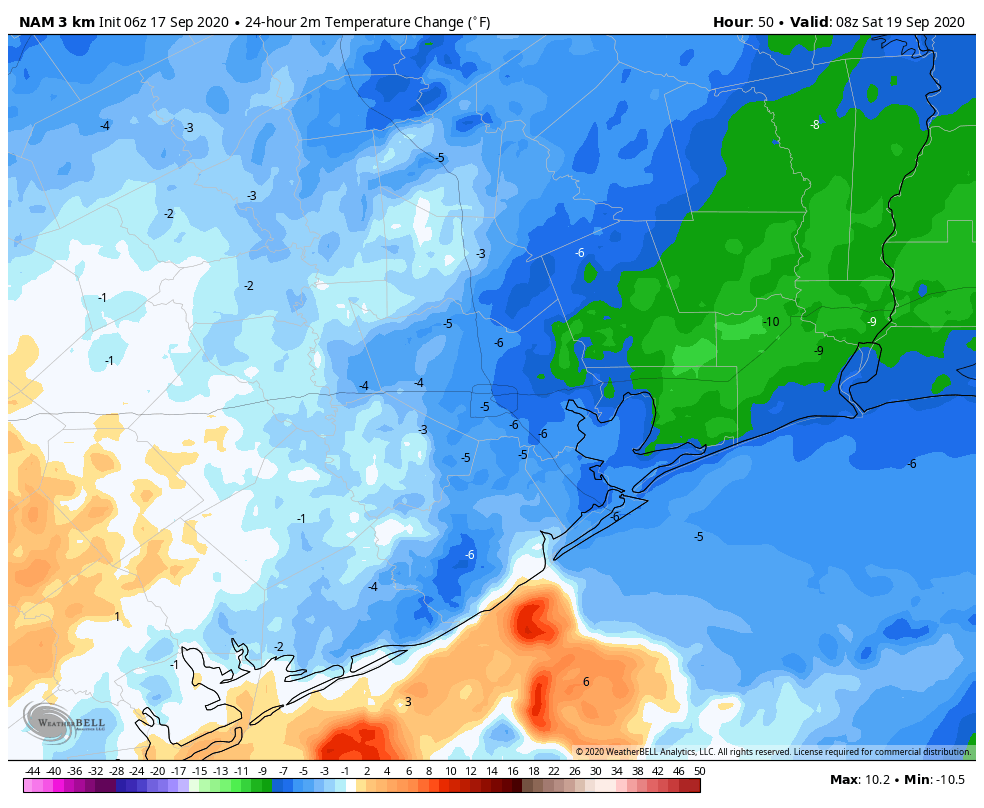 This will leave us with a pleasant weekend. Right now I’d peg highs in the upper 80s, with mostly sunny skies, for most of us. With lower dewpoints, these temperatures will feel much more comfortable. Low temperatures should get into the mid- to upper-60s on Saturday and Sunday mornings, except for the coast, which will stay a bit warmer. So clearly not cold, but after months and months of summer, the difference in humidity will be notable. Enjoy this taste of fall for a few days Houston, you’ve earned it.

Our weather next week will likely see the return of mostly cloudy skies and increasing rain chances, but how cloudy and how much rain will depend upon the evolution of a system now in the southern Gulf. The National Hurricane Center now anticipates this will become Tropical Storm Wilfred during the next 48 hours—probably sooner rather than later. 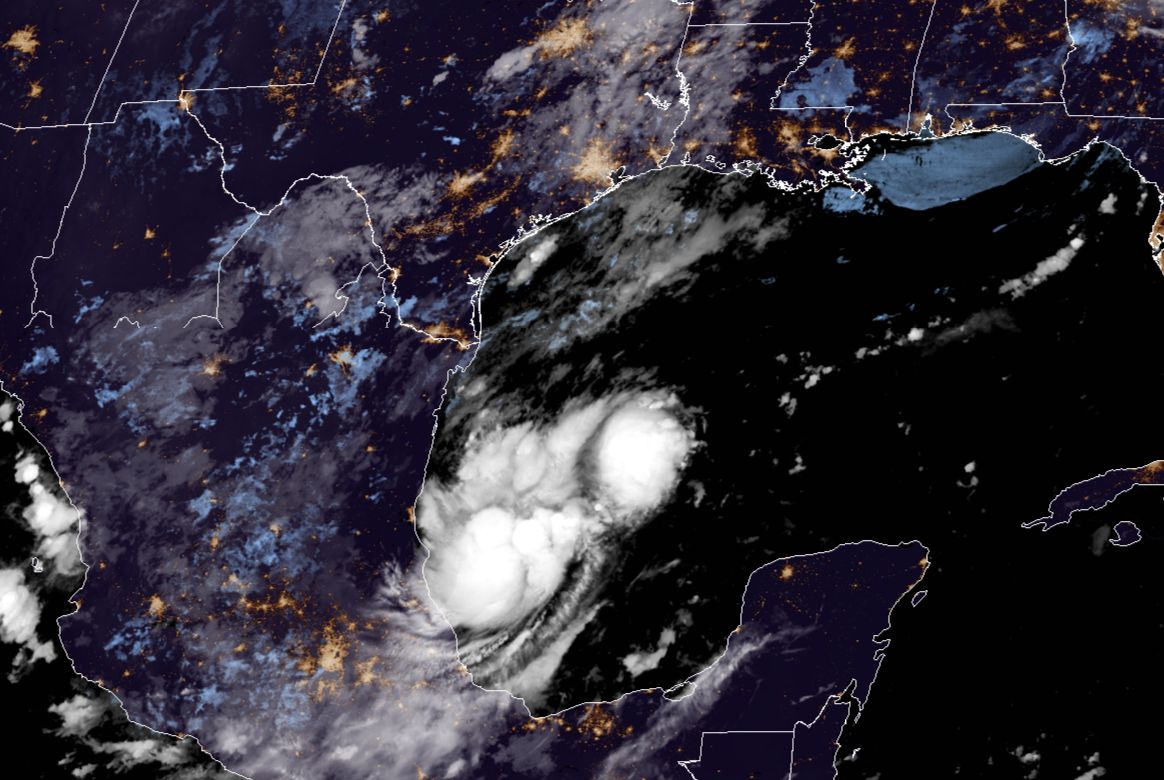 The front pushing through Houston will prevent northward movement of this system this weekend, so expect it to remain bottled up in the Bay of Campeche or southern Gulf of Mexico over the next several days. Most of the model guidance keeps it at tropical storm strength during that time—but it’s 2020, so who knows? The storm’s heaviest rains should remain offshore through Monday or so.

After meandering around the southern Gulf of Mexico for the next four or five days, we think the system will probably move north a bit, perhaps toward somewhere off the Texas coast. After this time our confidence in where the storm will go is quite low. The most plausible scenarios are a) an eventual movement to the northeast—making a final landfall late next week between Louisiana and the Florida panhandle, or b) sinking slowly to the southwest toward northern Mexico or southern Texas. While we cannot rule out a track into the central or upper Texas coasts, right now that seems like a fairly low probability. Regardless, the storm will increase seas along the Texas coast. 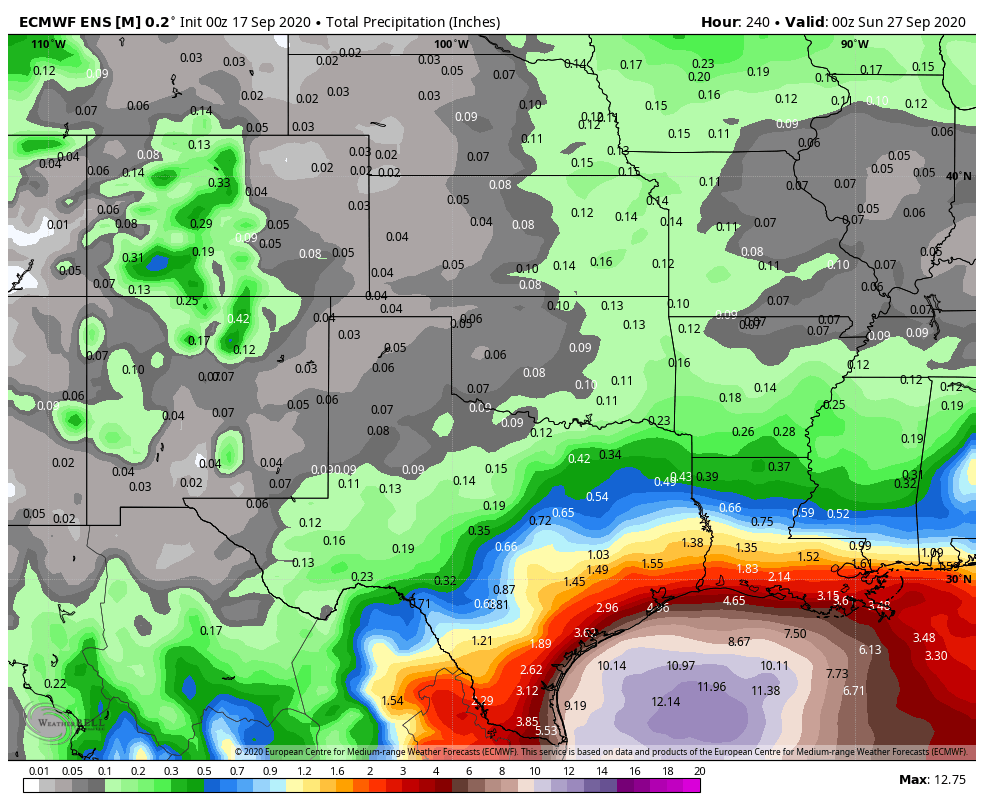 In terms of rainfall, this storm will be capable of producing a lot of precipitation. Wherever it ultimately goes, “Wilfred” will be capable of putting down 15 or more inches of rain. The current ensemble run of the European model shows this, and helps us understand why its eventual track is important. For now, this precipitation forecast is probably a pretty good guess in terms of rainfall between now and next Saturday—with the Houston area seeing perhaps 2 to 4 inches during that time. But this forecast will definitely change. If the storm stays further away Houston can expect considerably less, and if it tracks closer we’d get more.

We’ll remain on top of it for you.

11 thoughts on “Tracking a cool front, and a developing tropical system in the Gulf”