Tropical Storm Imelda formed Tuesday afternoon just before making landfall near Freeport, Texas. The storm will bring some moderate wind gusts into the upper Texas coast over the next day or two, but by far our bigger concern is heavy rainfall and inland flooding as the storm pulls copious moisture inland. To that end, we are escalating our alert to Stage Three on our flood scale. This means we are likely to see significant flash flooding. This post will explain why.

Probably the most notable shift in the modeling guidance has been an acceleration of when we expect heavier rainfall to begin. It now appears likely that heavier rains will move into Houston this evening, with banding features consistent with a tropical storm. We now also have increasing confidence that the worst of this will be over by Thursday afternoon or evening—so Houston appears to be locked into this mess for the next 48 hours or so. (It’s nice to have a fairly clear end point). 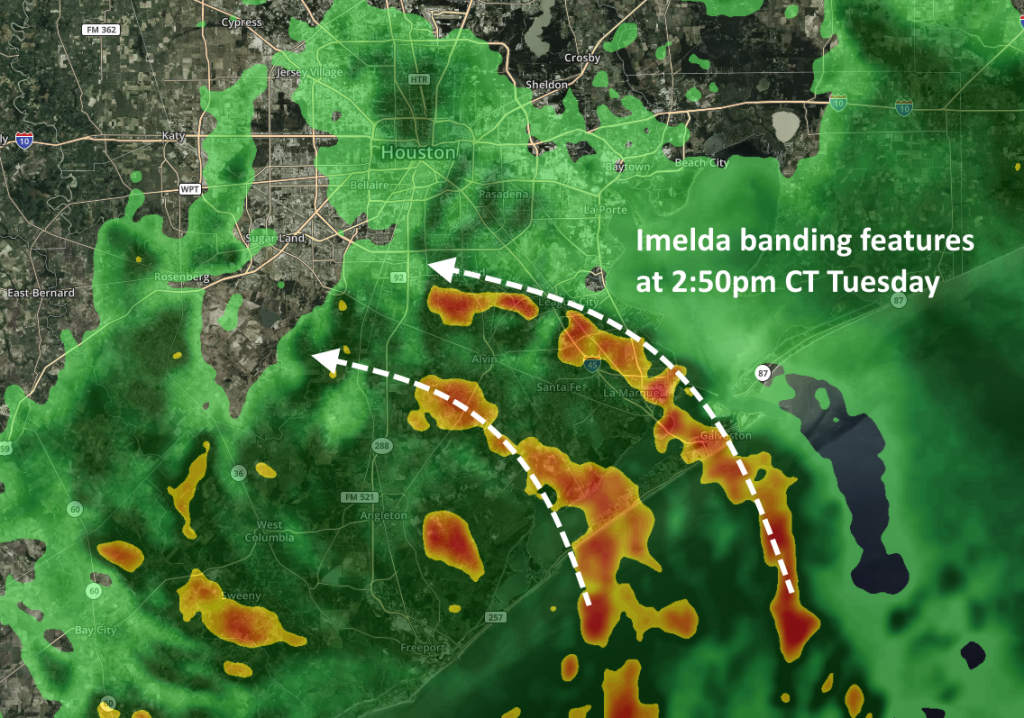 A good portion of Harris County, and coastal counties, will likely see between 3 and 6 inches of rainfall this evening, during the overnight hours Tuesday, and through Wednesday morning. There may also be a narrower band that sees as much as 12 to 15 inches tonight, although it is not clear whether this will occur along the coast, offshore, or somewhere east of Interstate 45. Where this heavier rainfall occurs we probably will see significant street flooding due to extremely high rainfall rates, and potentially water getting into homes. During any flash flooding please remain in your location and do not venture out.

As Imelda slowly lifts north, we expect the more intense band of rainfall to lift with it. So our biggest concerns for heavy rainfall later on Wednesday and Thursday will probably migrate to the Interstate 10 corridor and further inland. But frankly, we’ll have to reassess this after we get through Tuesday night.

As for overall event totals through Thursday, it seems a fair bet that most of the Houston metro area will pick up 5 to 10 inches of rainfall, with isolated totals of 20 inches or greater. Most likely these higher totals will occur somewhere east of Interstate 45, but whether that’s over Galveston Bay; East Harris County; or Liberty and Montgomery Counties, is difficult to say. More later. Hang in there, y’all.