Houston’s brief flirtation with winter-like weather will come to an end today, as low temperatures are unlikely to fall back into the 40s for at least a week now. It won’t be hot for the next week—but it won’t be cold either. For Super Bowl organizers, that’s probably just fine.

Houston will have another really great day today, with highs climbing into the mid- to upper-70s under sunny skies. Humidity levels will remain fairly low, but moisture will begin returning along with some southerly winds. Lows tonight will be in the upper 50s. 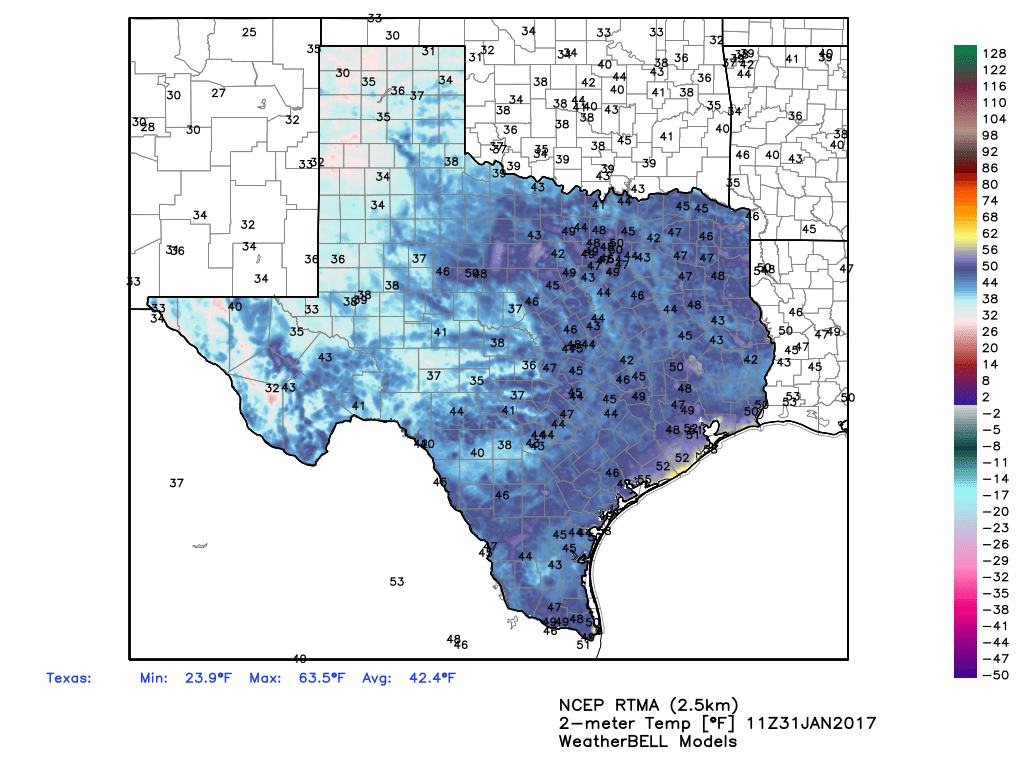 After one more chilly morning Texas will warm up this week. (Weather Bell)

Conditions will be much like Tuesday, although a few degrees warmer, and a little bit more humid with mostly sunny skies. Some fog is possible Wednesday night and Thursday morning.

A weak cool front will move into the area, bringing some slightly cooler weather and low rain chances. Still, for the most part, this should be a pretty nice day, with highs in the mid-70s and partly sunny skies.

Skies will become mostly cloudy as we head into the weekend. There is also some moderate uncertainty about high temperatures. Friday seems likely to be pretty solidly in the mid-70s, but with some light rain chances we could see highs only of about 65 degrees (plus or minus) on Saturday, and highs of around 70 degrees on Sunday. Overnight lows should remain in the 60 to 65 degree range. Given the clouds and rising moisture, I think most areas will at least see some sprinkles, and there will probably be a few intermittent showers. I don’t expect any significant thunderstorm activity. The rain chances may well scuttle the plans of the NFL to force the Texans to open the roof for the game.

This warmish pattern should continue through the first part of next week, and we could see overnight lows rise into the mid- or even upper-60s by Tuesday or so. That’s pretty ugh for February. But now the models seem to be closing in on Wednesday for the region’s next reasonably strong cold front, which will bring temperatures back down to climatological norms for winter, if not a tad colder.

Posted at 6:55am CT on Tuesday by Eric