Houston will see one more cold morning, with low temperatures in the low 40s for most of the area, before conditions moderate toward more spring-like weather. For Super Bowl organizers, weather this week will be nearly perfect—although there is some concern about rain chances on game day itself.

A westerly flow will ensure that Houston will see one more dry day today, with highs rising into the low 70s under mostly sunny skies. Lows tonight will fall to about 50 degrees. It’s going to be lovely.

Winds are going to swing back around to come out of the south, but it does not appear as though conditions will be overly blustery. Thus the transition from very dry, the more moist weather will be gradual. As a result look for highs around the mid-70s on Tuesday and Wednesday, with continued mostly sunny skies. Overnight lows will climb back up to about 60 degrees by Wednesday night.

It looks as though a cold front will stall over central Texas, or some where just to the west of the Houston area on Thursday. Lift associated with this nearby boundary, and modestly increasing moisture levels, will return some clouds and rain chances for the region toward the end of the week—but any rain will probably be light and brief. We should still see some sunshine. Highs will remain around 70 degrees, with lows likely ranging from the mid-50s to lower 60s.

A fairly weak cold front will approach Houston by late Saturday night or Sunday morning, but there’s still some question as to whether it will push all the way through the region. It probably does, bringing a few days of moderately cooler weather, but I’m not 100 percent sold. 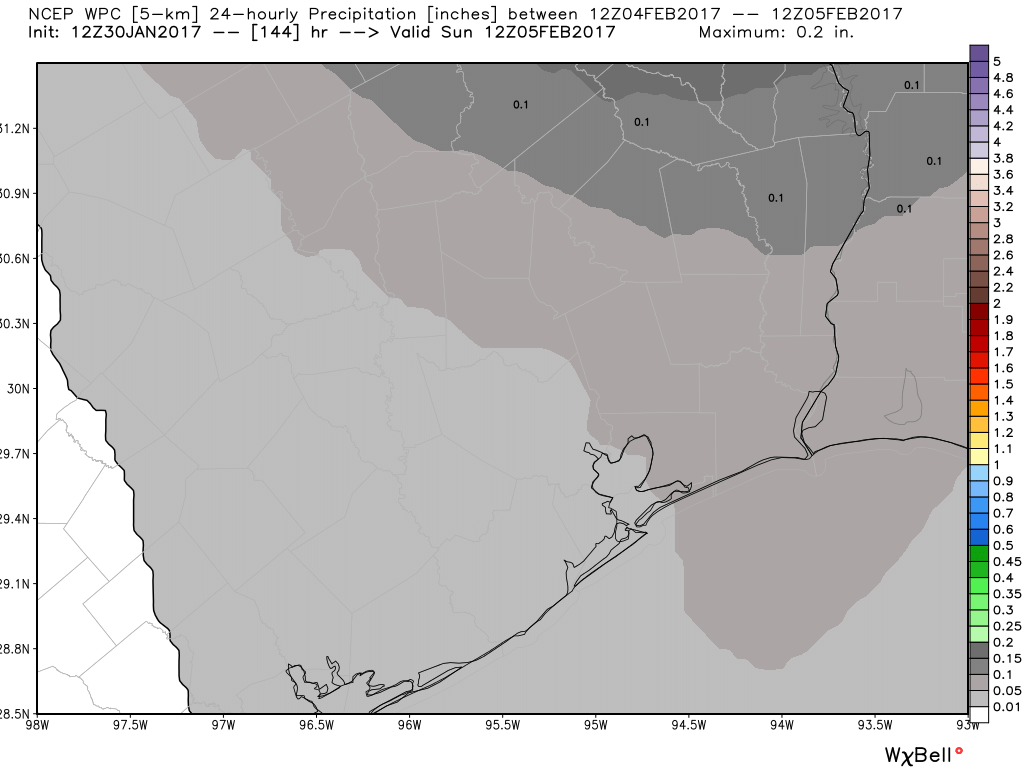 In any case, with a front nearby or moving through, there’s a decent chance of some more light rain on Sunday morning and into the early afternoon hours, but nothing too serious. We’re probably looking at less than one-half inch for the entire region—and likely considerably less than that. Temperatures are dependent upon the front, but right now a temperature of around 70 degrees during the hours leading up to kickoff remains most likely.

Posted at 6:50am CT on Monday by Eric