Thursday saw another mixed bag of weather, with some folks seeing heavy rainfall and others seeing not much of anything. We should replay that program today before better odds of rain and storms return this weekend.

Expect at least a handful of showers and thunderstorms today. Not everyone will get rain, but those that do could see some heavier downpours. In terms of coverage, it will probably be similar to or less than what we saw yesterday, with the best chances the closer you get to the coast. Today probably carries the lowest rain chances of the next several days.

Temperatures will range from the upper-80s where you see showers to the low-90s further inland with drier weather more likely.

We’ll see another disturbance about 20,000 feet up migrate toward us this weekend. What does that mean? It means gradually increasing rain and storm chances again. Saturday shouldn’t be a washout, but there will be a few more showers and storms than we saw yesterday and will see today. Sunday may be when the more widespread showers and storms impact us. Some of the rain on Sunday could be locally heavy. Additional widely scattered showers and storms will remain with us for Labor Day. 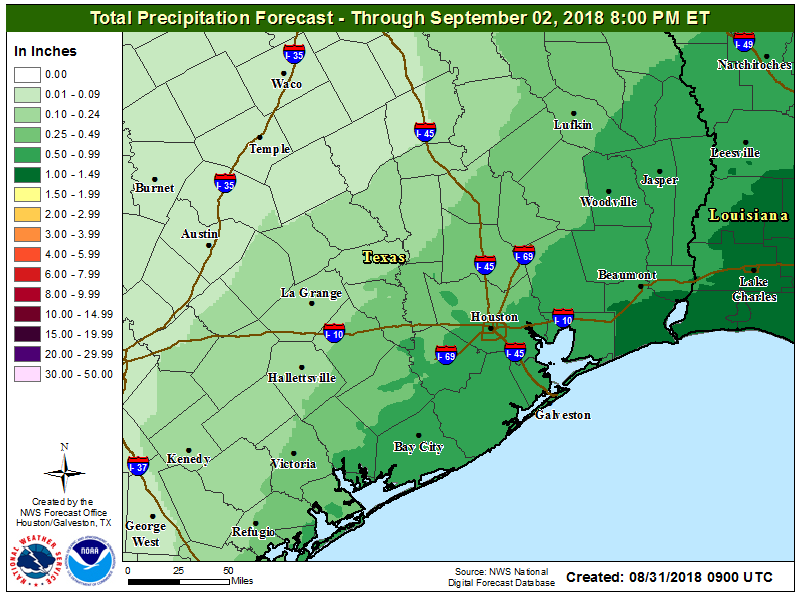 Rainfall through Sunday evening should average close to a half-inch, with higher amounts likely in spots, especially south and east of Houston. (NWS)

Best course of action this weekend? Have a rain plan ready to implement if you’ve got any outdoor activities. In some cases, you won’t need to use it, but given the erratic nature of rainfall in these setups, it would be good to have a plan to turn to. We don’t expect any serious flooding this weekend, but as is almost always the case in Southeast Texas storm setups, locally heavy rainfall could lead to brief, localized street flooding in areas of poor drainage.

Also worth noting, the tropical thunderstorms this weekend could be capable of producing funnel clouds or brief waterspouts, especially in the morning near the coast. Just something to keep in mind if you’ll be at the beach this weekend.

Expect temperatures in the upper-80s most days, with low 90s inland if rainfall doesn’t materialize quite as much as anticipated.

On again, off again rain showers will be with us for much of next week as broad onshore flow continues off the Gulf. As of now, it looks like we’ll see a good bit of coverage on Tuesday, perhaps backing off on Wednesday, before increasing again late next week as a tropical wave approaches. Speaking of…

We are approaching the heart of hurricane season, and as we’ve been telling you would be the case since last week, the tropics are concurrently heating up. The main item for us to watch is  a tropical wave near Hispaniola, moving toward the Bahamas this morning. 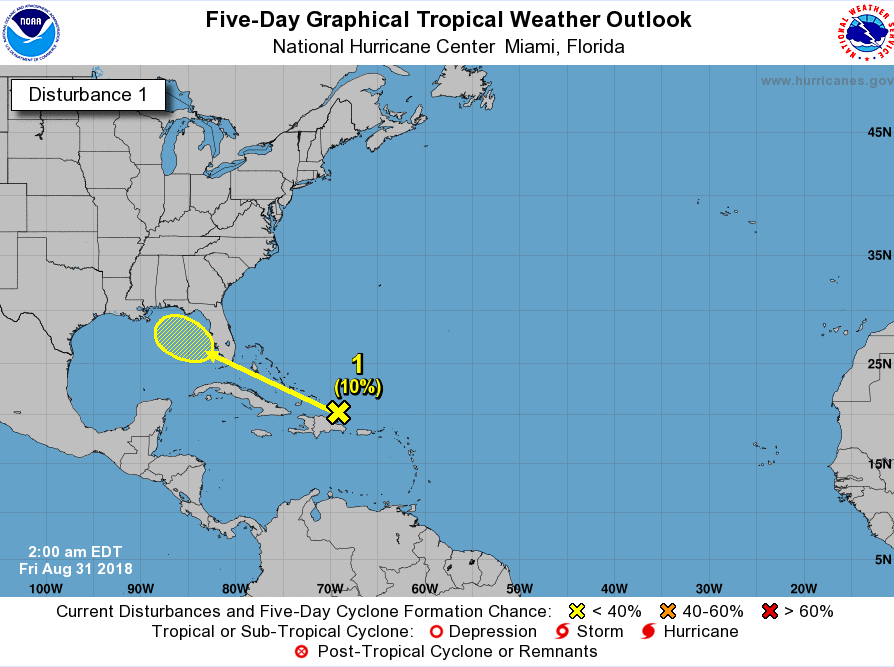 The National Hurricane Center is giving the tropical wave near Hispaniola a 10% chance of developing as it enters the Gulf next week. (NHC)

As we go through the weekend, that wave will stay disorganized and track across the Bahamas and Florida, eventually finding the Gulf after Labor Day. As of now, the National Hurricane Center (NHC) is only assigning about a 10 percent chance that this develops. This is mostly backed up by weather modeling, none of which really shows anything significant developing right now. It’s certainly not a disturbance to worry about right now, but given the time of year and some of the basic uncertainties surrounding this one, we’ll want to babysit it over the next few days. At the very least, I would expect this system to enhance daily rain chances late next week or weekend as it tracks toward us. Eric or myself will have an update on this for you by Monday, as we hopefully gain clarity on what this disturbance will do, if anything at all.

Elsewhere, the NHC is issuing advisories on “Potential Tropical Cyclone Number Six” (PTC #6), which is a fancy way of saying “a tropical wave that will likely develop into a depression or storm soon.” 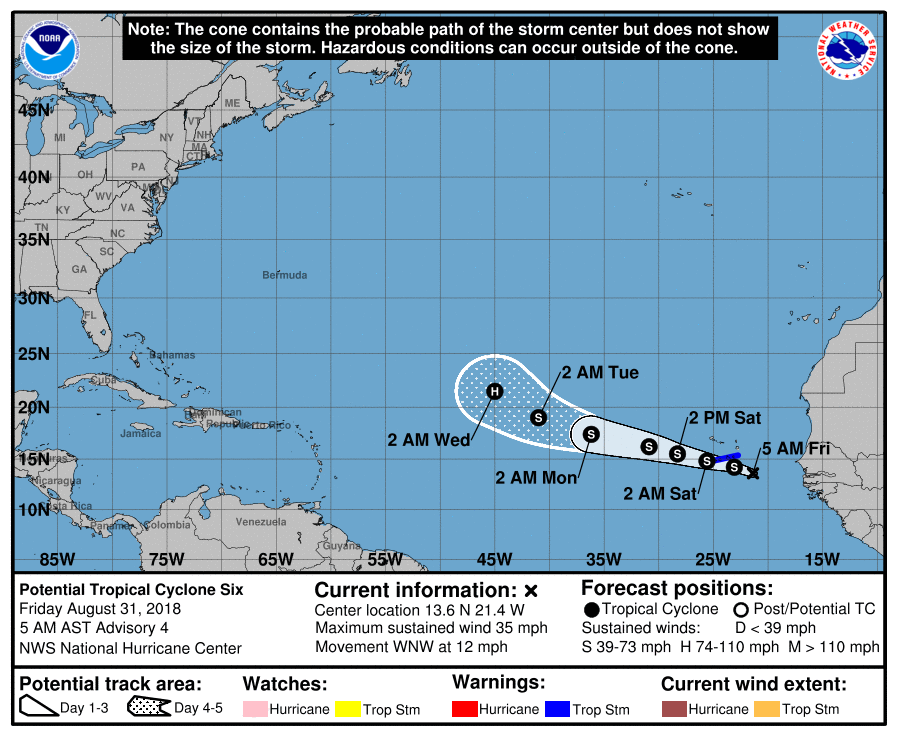 PTC #6 should become Tropical Storm Florence today or tonight. It will graze the Cabo Verde Islands before likely heading out to sea. (NHC)

And indeed, the NHC projects PTC #6 to become Tropical Storm Florence later today. Florence should eventually become a hurricane, but it is expected to turn out to sea and should not be a concern for us in the U.S.

Behind to-be Florence, there will likely be at least two, possibly three more tropical waves that will be candidates to develop over the next 10-12 days or so. It’s too soon to say what, if anything, will become of those features, but suffice to say, the tropics will remain active as we head through the first half of September. We’ll let you know if there’s anything to be concerned about.