After a brief cool spell this weekend, perhaps it is only right that Houston ends meteorological winter (December through February) on a warm note. Houston has already set a record for most 80-degree days this winter, and it seems likely we will end with the warmest average temperature in more than 120 years of records. We’ll have the full wrap-up on that later this week when the numbers become official.

But it hasn’t just been Houston of course. I wanted to share with you this amazing tidbit from the National Weather Service office in the Windy City: “Chicago’s about to do something its never done in 146 years of record keeping: go the entire months of January & February with no snow on the ground.”

Houston will rise back into the 80s today and Tuesday to end winter, after overnight lows barely dropped into the upper 60s on Monday morning.

Although moisture levels will be fairly high for the next two days, there’s some question as to whether it will actually rain. This is due to a capping inversion, which probably will hold for most of the area. An inversion occurs where temperatures above the surface of the Earth are higher than at the surface, and this prevents warm, moist air at the surface from rising. In any case, know that there is the potential for showers and thunderstorms to develop the next couple of days, but they probably won’t due to the cap.

The region’s next cold front arrives on Wednesday, probably sometime around sunrise for most of the region, or fairly shortly thereafter. I think there’s a decent chance a line of storms will form along the front as it moves through the area, but again this is dependent upon the strength of the capping inversion. In any case, I expect the rain to be over fairly quickly and we should have to worry too much about accumulations. Highs Wednesday will likely rise into the mid- to upper-70s as skies clear. Lows will fall to around 50. 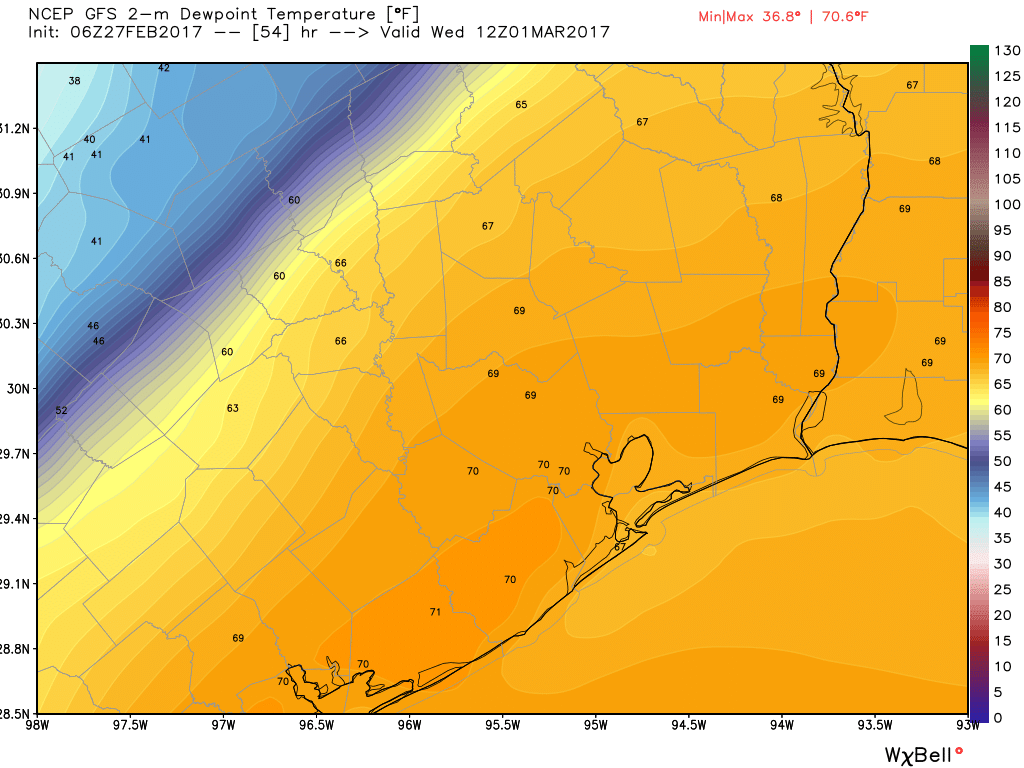 The GFS model shows a cold front racing toward Houston at 6am CT Wednesday. (Weather Bell)

We’ll have splendid weather to end the work week, with highs in the upper 60s, lows around 50 degrees, and mostly sunny skies. Enjoy!

As moisture levels begin to rise on Friday, this could set the stage for some rainfall next weekend, but the forecast isn’t exactly clear. I don’t think we’re looking at anything too significant in terms of accumulations, but clouds and the threat of rain may but a damper on some outdoor activities. Highs will probably be around 70 degrees.

Posted at 6:55am CT on Monday by Eric

3 thoughts on ““Winter” ends on a warm note (of course!) before a mid-week front”