Wintry weather in Houston doesn’t tend to last too long, and this will be another case where we escape the chill rather quickly. That said, we have an interesting extended range to watch. Some words on that in just a bit.

As I write this, the official temperature at Bush Intercontinental Airport is 38 degrees. Looks like Houston will officially bottom out around 36-37°. The freezing line is well north of the city and should just get to about maybe Conroe. A few rural pockets on either side of Houston could briefly touch freezing before 7:30-8 AM. 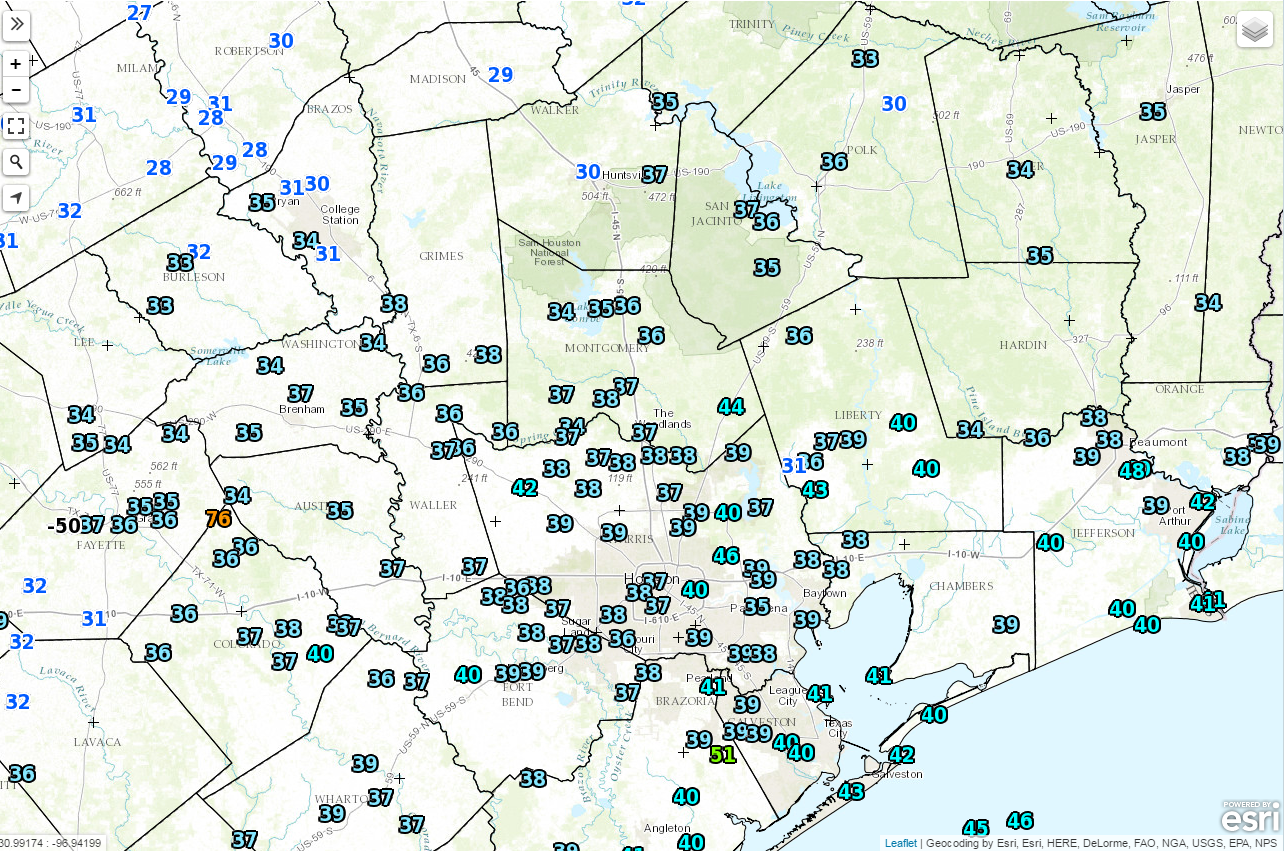 Temperatures as of 6:30 AM show the freezing line staying well north of Houston. (NOAA/NWS)

Overall, no big deal in the city, but certainly a light freeze to the north. Now, all that said, it feels unpleasant out there this morning. It’s still breezy, with winds gusting to about 15-20 mph at times. Wind chill values are in the 20s across much of the area. And it will take a few hours this morning before it feels a little nicer. 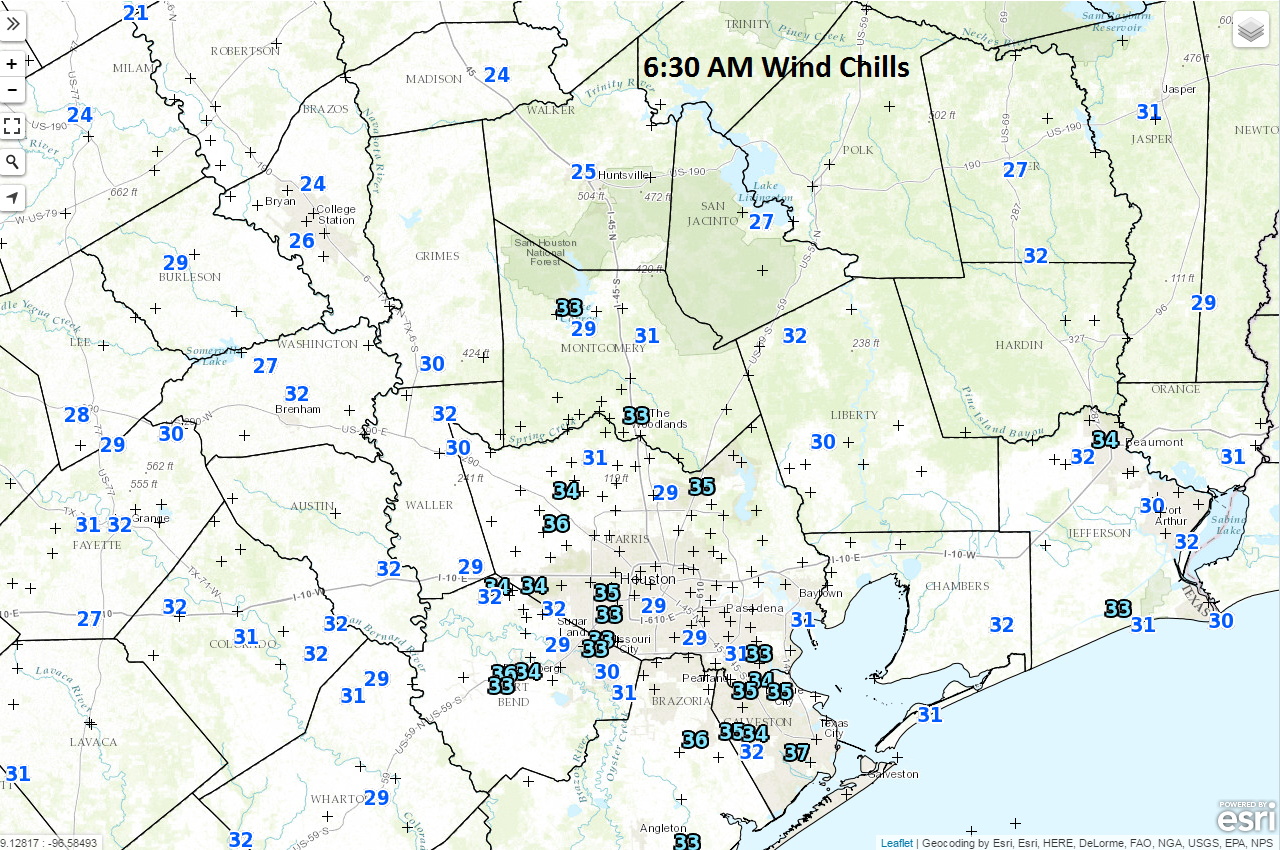 Wind chills this morning aren’t brutal, but they aren’t pleasant either. (NOAA/NWS)

Temperatures will warm up to the mid and upper 40s this afternoon, with a variable mix of sun and clouds.

Overall, this weekend will be neither the best nor worst weekend we’ve ever experienced. Saturday will feature a few changes in the atmosphere: More onshore winds, gradually increasing humidity, and increasing clouds. We’ll start the day chilly again. There is a slight chance that temperatures could again push freezing north of Houston by tomorrow morning. Model guidance is a little more bullish on that risk than I expected this morning. Expect mostly upper 30s to low 40s south of Houston, with low to mid 30s north. A freeze in the city itself is unlikely, but areas outside the Beltway could come closer than this morning if clouds hold off. Saturday afternoon will press into the low to mid 50s with cloud cover. Temperatures probably won’t drop much Saturday night, and in fact, they may continue to rise to near 60 on Sunday morning.

Sunday itself should be a bit dreary. We’ll have clouds and a few showers or sprinkles around. Temperatures continue to edge upward to around 70 degrees by Sunday afternoon. I wouldn’t be shocked to see issues with fog near Galveston by Sunday or Sunday night.

Overall: Your weekend plans are all a-go, but Saturday will be a little nicer (albeit cooler) than Sunday.

A weak cold front will slide through Monday, kicking showers away temporarily. But the front will quickly lift back over us as a warm front, continuing the mild weather into Tuesday and Wednesday, along with a low-end shower chance. So we’ll see no wintry weather to start the week, but what about later in the week? Well, it’s complicated. Here’s the forecast of air temperatures about 5,000′ up next Thursday. 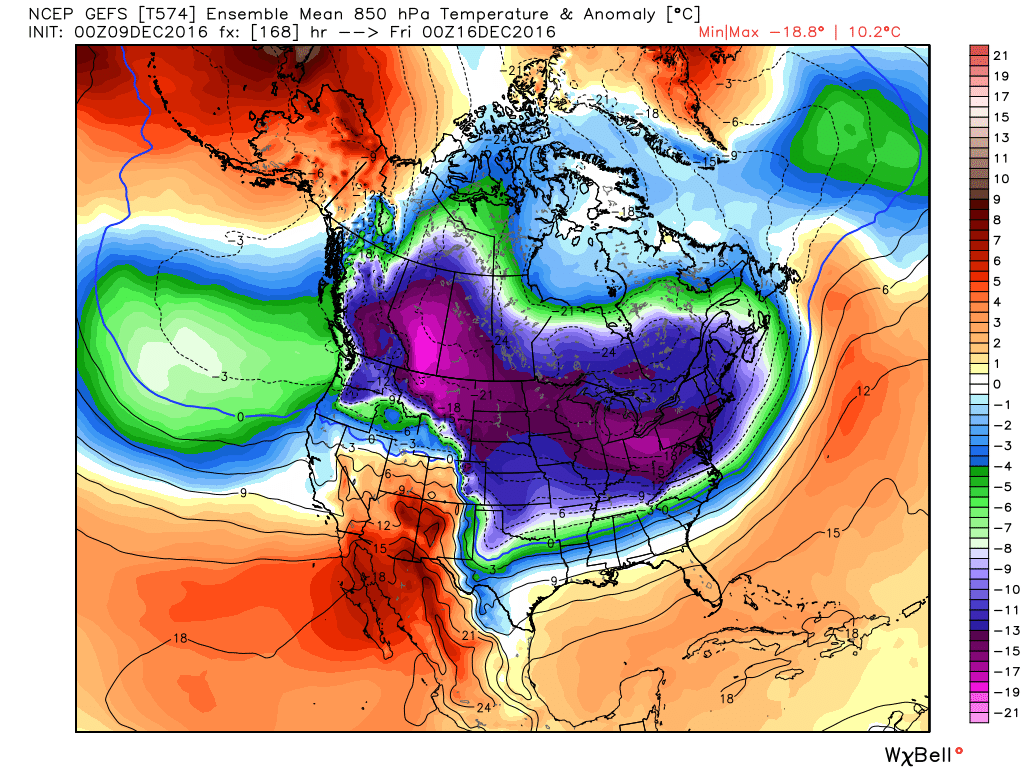 Cold tries to push into South Texas next Thursday, but it is going to face some resistance. (Weather Bell)

There’s definitely going to be a cold front mid to late next week in Texas. The question is whether it will have enough “oomph” behind it to really press cold in here. The one thing to notice from the map above is the tight temperature gradient. In other words, the change in temperatures over a small distance is great. You quickly go from near or above normal to sharply below normal. So trying to iron out details seven days out is difficult because small shifts in the forecast can mean big temperature changes. This battle continues into next weekend, with a warmer Texas and a frigid northern U.S. Wintry weather is certainly here, and unlike last year, there’s a good deal of cold air to work with. This first real cold blast we’re experiencing this morning will certainly not be the last for Southeast Texas, so stay tuned.