This week the Texas Tribune, along with ProPublica, unleashed their second in-depth piece on Houston’s flooding risk. This one, entitled “Boomtown, Flood Town,” takes a closer look at the Tax Day flood event of last April and a broader look at Houston’s flood risk in the context of policy, development, and future climate change. It’s a long, thorough read, and I highly recommend the piece. This supplements their work earlier this year about our hurricane and storm surge risk. I personally think that is one of the more important articles that exists on Houston’s vulnerability to hurricanes.

In the “Boomtown, Flood Town” piece, a number of issues related to April’s flood event and Houston development are addressed. As I said, I encourage you to check it out yourself, but in the meantime, here are some key points that I’m taking away from this

Houston’s flooding issues are important because more people die in Houston from flooding than in any other city. No other urban area in America has flooded as much as Houston in the last 40 years. 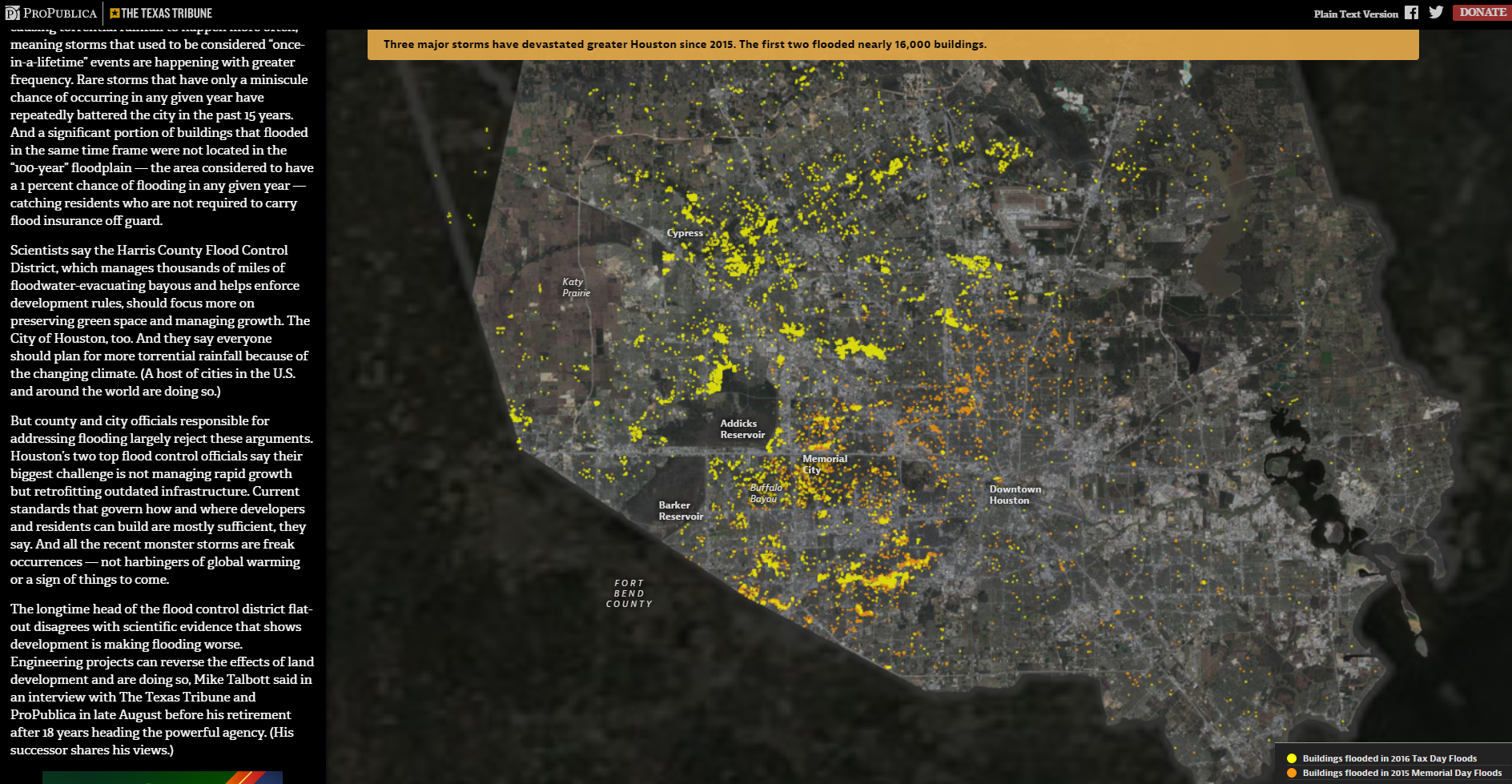 “Boomtown, Flood Town,” from the Texas Tribune and ProPublica.

Houston is inherently flood prone. But as the climate warms, evidence continues to mount, that the intensity and frequency of heavy rain events will continue trending up.

Fairly or unfairly, the leadership of the Harris County Flood Control District (HCFCD) don’t come off looking very good here. Their comments are provocative, sound quite combative, and they seem to discount a lot of universally accepted science. At one point, the recently retired head of the HCFCD said, “You need to find some better experts.” It’s really just not a good look in this piece, as the pro-development county official seems unwilling to accept the reality that this growth makes flooding worse. Good governance requires one to recognize a problem in order to mitigate it.

The City of Houston’s new position of “flood czar” (Stephen Costello) comes off sympathetic in the piece. The sense I get is that he’s somewhat hamstrung to make a lot of headway on these issues. Costello will hire his first paid staffer in the weeks ahead according to the piece.

Some of the residents interviewed have seen their property (including some not in FEMA floodplains) flood multiple times in the last 10-15 years after never flooding for years before. The piece tackles the patchwork and often lax enforcement of development regulations and addresses the fact that explosive development of the Katy Prairie may be redirecting water in ways such that it now impacts people downstream who have never flooded in the past.

The piece hits on development in the Cypress Creek watershed in northwest Harris County, policy issues in Houston since Allison in 2001, Addicks Reservoir and how a new reservoir would be a big help, and how Fort Bend County has seemingly done a better job at addressing some of these problems than Harris County.

I think the big takeaway here is that Houston is and always will be a flood prone place. No two flood events are identical, and changes in development and land-use over time, coupled with climate change are sure to make future flood events behave differently also. The bigger immediate problem seems to be that not much is really happening with regard to serious area-wide mitigation. There are ideas, but a lack of resources or political willpower to move them forward, given the high cost. Overall, this piece is very informative, and I think most people can take something away from this. Eric and I support this sort of awareness continuing. We’ll be sharing stories like this with you and pursuing our own stories when we can.