On Monday the state climatologist, John Nielsen-Gammon, called my attention to the visible satellite image page for the upper Texas coast. I’ve attached a snippet below, showing the period roughly from 8am to 1pm on Monday. If you look just northwest of Galveston Bay you can see the cooling stack plumes show up from some of the largest refineries in the Ship Channel. These facilities are leaving bow wakes in the low-stratus cloud layer.

So what is causing this? The cause is weather-related, John speculates it is likely a combination of the following factors:

In any case, the weather on the Texas coast is rarely dull! Now, on to the forecast.

A diffuse mass of mostly light to moderate rain showers will move slowly from west to east across the Houston area today. The showers, with possibly a few embedded, stronger thunderstorms, will probably persist through most of the daytime hours. Most parts of the region should see between 0.25 and 0.5 inches of rain throughout the day. The combination of clouds and rain will likely limit daytime highs to the upper 60s for most of the region. After sunset, a cold front will sweep through Houston to help dry the region out. Conditions tonight will be breezy and colder, dropping into the 40s.

We should see some clearing skies on Wednesday, but the combination of northerly winds (perhaps gusting to 20mph or so) and the front should limit high temperatures to around 60 degrees. Lows Wednesday night should again drop into the upper 40s for most of Houston.

Partly to mostly cloudy weather will return to end the work week, with a pair of chilly days in the upper 50s to 60 degrees, and nights in the 40s. Both days will probably see some scattered showers, but accumulations look pretty slight for the most part, perhaps measuring in a tenth or two of an inch of rainfall. A front will eventually follow the rain, and this should lead to some clearing skies by Friday afternoon or evening.

Our confidence in nice weekend weather is increasing. Conditions look pleasant for the Houston area, with highs in the mid-60s on Saturday, and 70 on Sunday. I don’t think skies will be 100 percent clear, but there should be lots of sunshine. 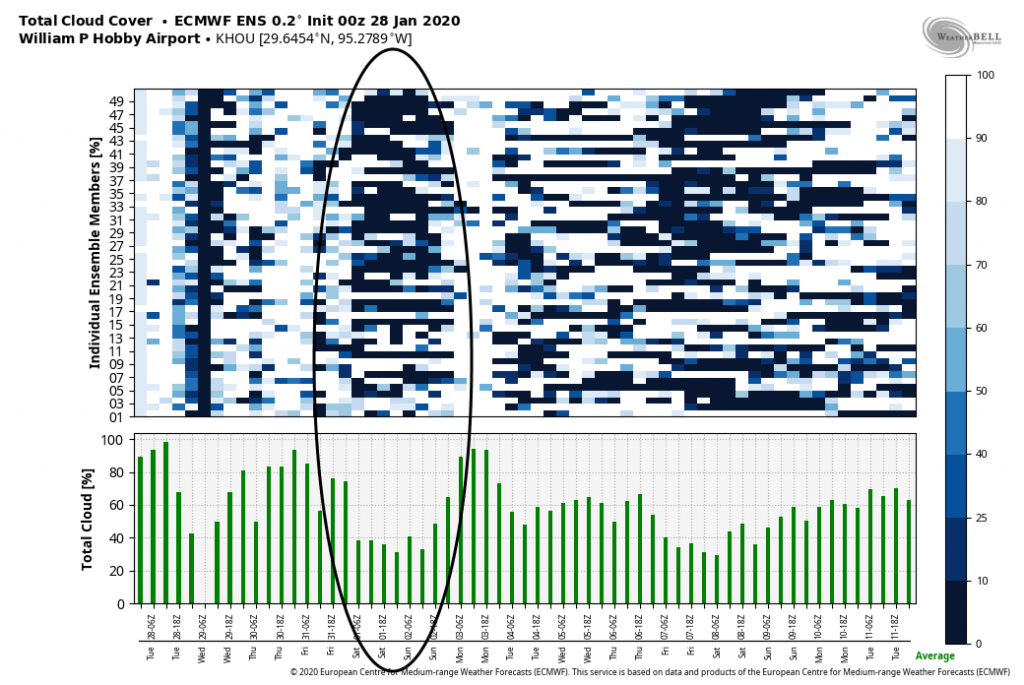 Skies should be partly to mostly sunny this weekend. (Weather Bell)

It looks like we’ll see a warming trend on Monday and Tuesday, with highs probably somewhere in the 70s, before a stronger cold front arrives to bring chilly mid-week conditions. Does that mean nights in the 40s? Or even the 30s? We’ll have to wait for those kinds of details.

8 thoughts on “With Houston’s low clouds, Ship Channel shows up on radar”