It’s a breezy, chilly morning, with temperatures in the 40s and winds gusting above 20mph across most of Houston. We’re really not going to see temperatures much above 60 degrees until the weekend, when conditions look rather pleasant

We had been hoping to see some sunshine today, but there’s enough moisture above the surface to generate some clouds this morning. As a result, we’re likely to see partly to mostly cloudy skies throughout the day. Add to that steady northwesterly winds in the 10-15 mph range, with stronger gusts, and we’ve the makings of a cool day. Highs will probably top out in the upper 50s to 60 degrees. Low temperatures tonight will drop into the 40s under mostly cloudy skies. 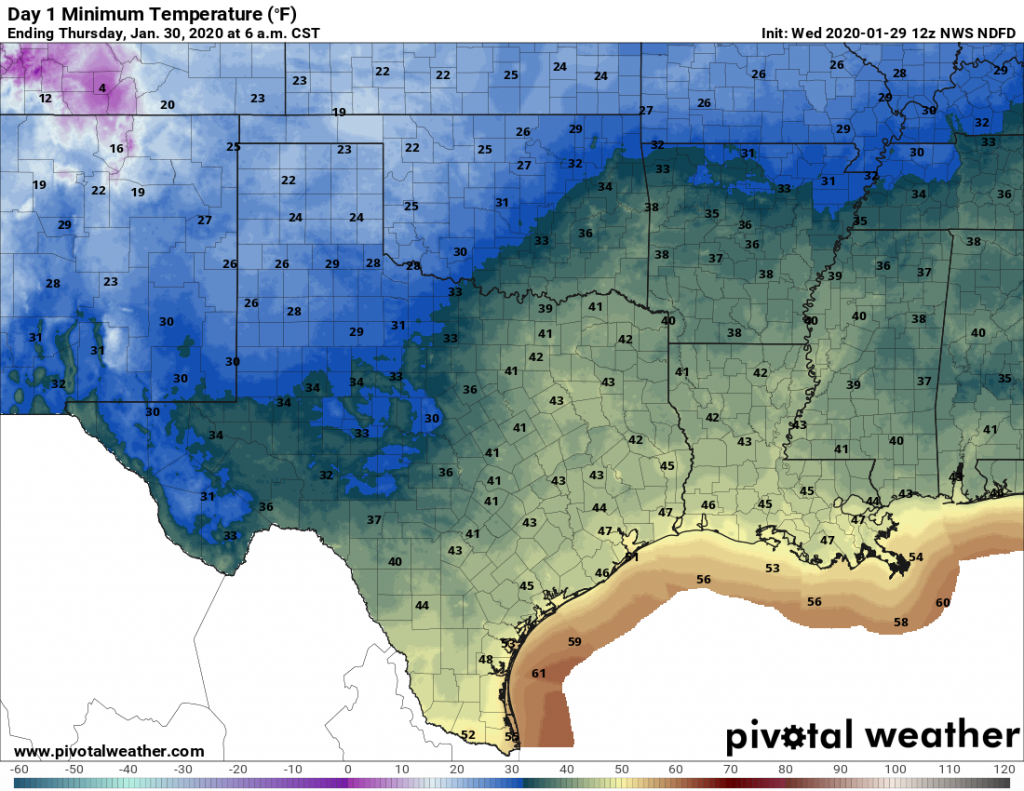 We may see a little more sunshine on Thursday morning, but pretty quickly the high pressure in the wake of Tuesday evening’s front is going to move off to the east. This will open the region up to a couple of atmospheric disturbances. Highs Thursday should reach about 60 degrees again, with very slight rain chances during the afternoon hours. Chances increase during the overnight hours into Friday morning as a cold front approaches, but the models are keeping the the heavier rain showers offshore. As a result, I’d expect pretty much all of the Houston area to receive a tenth or two of an inch of rain—if that.

At this point we think rain chances will come to an end on Friday morning, with the prospect of clearing skies during the afternoon and a pleasant—if breezy, with a northerly wind—day with highs of around 60 degrees. Overnight temperatures will probably get into the low 40s inland, and upper 40s near the coast.

The first half of the weekend still looks pretty darn nice. The models are split as to how much sunshine the region is going to see. I definitely expect mostly sunny skies if you live north of Interstate 10, but there will probably be some more clouds down along the coast. Expect highs in the 60s, but temperatures will ultimately depend on the amount of sunshine. Another cool night, in the 40s.

Sunday should also produce a fair amount of sunshine, with highs getting into the lower 70s. Lows Sunday night will probably only fall into the 50s.

Expect Houston to see a warming trend in temperatures heading into the weekend. (Weather Bell)

Monday and Tuesday look warmer, with highs in the 70s, some clouds, and moderate rain chances. Foggy mornings would also not surprise me. At some point, Tuesday night perhaps, the region’s next strong front will push into the area. This may produce some additional rain, but it doesn’t have the look of being anything too impactful at this point. I’d guess lows in the wake of the front drop to around 40 degrees in Houston, but confidence in that is not overly high.

2 thoughts on “Cool weather until the weekend, which looks quite nice for Houston”