Good morning. Yesterday was the 16th day this month that we officially hit 95° or hotter in Houston. The last time we did that was 2013. At least this isn’t a repeat of 2011, when we did 95+ on 26 occasions. We will continue to flirt with 95 degrees for the final three days of June. More on that in a second. Below today’s forecast, we’ve got some analysis on the National Weather Service post-Harvey service assessment that was released last week. I farmed out some interesting tidbits for you that may be of interest. First, the forecast.

More hot weather is in store for us over the next couple days. We had a handful of showers in the region yesterday, and we’ll probably have a handful more today. However, atmospheric moisture looks a bit more robust today than it did yesterday, so that should yield a slightly larger handful of showers than Wednesday. That said, we’re talking like 20 percent chances at best here. Basically, if you see a cooling shower today or tomorrow, consider yourself fortunate.

Temperatures will peak around the middle 90s once again both Thursday and Friday.

Shower chances continue to look like they’ll dwindle to near zero this weekend. With that, expect more hot weather. Officially, high temperatures should reach the mid-90s both Saturday and Sunday. Take it easy outdoors, as it will continue to be quite humid and uncomfortable.

As noted yesterday, we will also be dealing with Saharan dust. Skies will be hazy or gray looking at times, despite sunshine. And again, if you have any respiratory ailments or bad allergies, you may want to take it a little extra easy this weekend, as air quality could be a little worse than usual.

Just to clarify, as we’ve gotten a handful of interesting questions, this isn’t a dust storm or big, unique event for us. This happens at least a few times a summer usually. The vast majority of us will notice more haze than usual and the color difference to the sky. Maybe, if we’re lucky, the sunsets and sunrises will be more vibrant, though I’m happy to put a Texas sunrise or sunset up against anyone’s on a normal day. Sometimes, too much dust can have the opposite effect and dull the sunsets or sunrises a bit.

The only real “impact,” per se, is the slight increase in particulate matter, which is why if you have bad allergies or other respiratory ailments, we encourage you to take it easy. It’s certainly meteorologically interesting and a nice reminder of how fascinating this marble is that we inhabit to realize that you’re seeing dust in the sky in Texas that’s come all the way from Africa.

We do still look to be on track for a change next week, though the details are very uncertain. We’ve got high confidence in Monday still looking a lot like the weekend, with some haze and plenty of heat and humidity. By Tuesday, a disturbance aloft will be approaching western Louisiana, perhaps generating slightly better storm chances east of Houston toward Beaumont or Lake Charles. After about Tuesday afternoon, forecast confidence trends downward. Wednesday will probably see our storm chances peak in the Houston area and just east, but depending on the speed and trajectory of next week’s disturbance, that could easily get pushed back to Thursday. 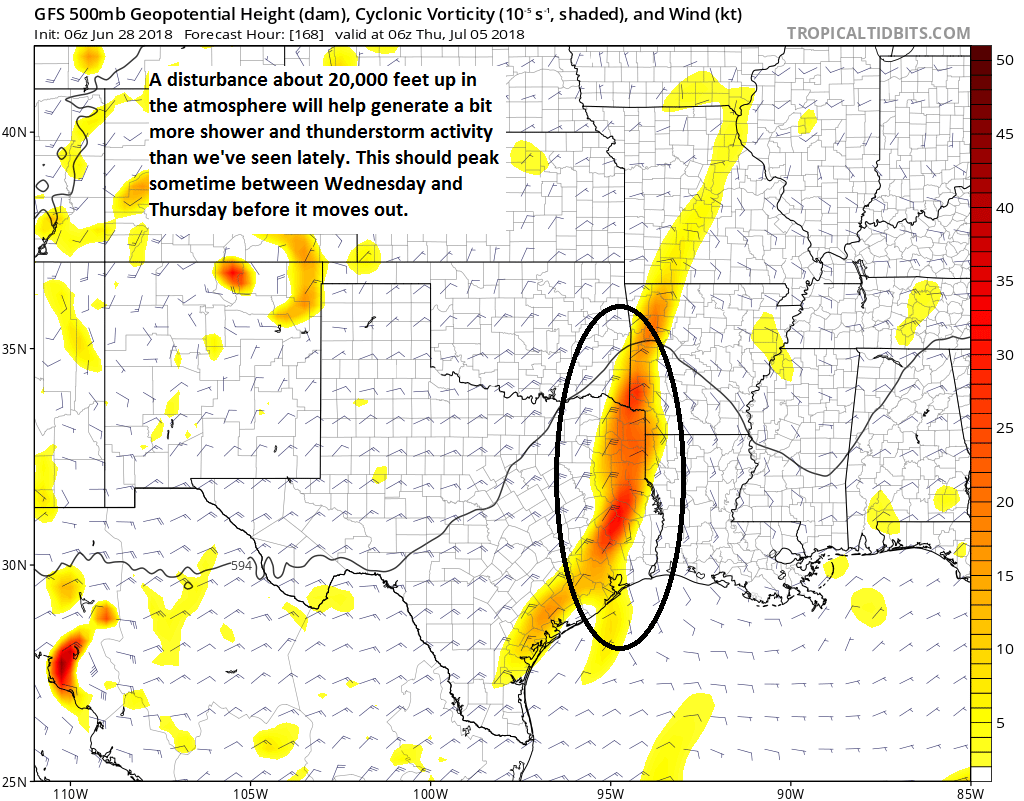 A disturbance in the upper atmosphere will help boost rain chances at some point next week, most likely between Wednesday and Thursday. (Tropical Tidbits)

So before you go cancelling any plans, just know that as of right now we don’t expect a washout on the Fourth of July yet, just a better than average chance of storms. That said, yes, if you have outdoor plans you want to stay tuned to the forecast, as this could shift one way or another pretty easily. More on this tomorrow.

The National Weather Service released their Hurricane Harvey Service Assessment last Wednesday. After major weather events, the NWS usually goes back and reviews their performance, conducts interviews, and produces recommendations based on the findings. The last NWS assessment was Hurricane Matthew in 2016 after it hit the Southeast. The assessments are usually very informative reads and helpful, though they are done by only folks within the government, so there have been arguments made in the past that this prevents a complete picture from being painted. At any rate, this report, at least on the surface, seems mostly non-controversial. I think there has been mostly universal praise of how NWS handled Harvey. Certainly we would agree that the NWS office in League City that serves the Houston area did an exemplary job during Harvey’s fury here. But there’s always room to improve, hence the assessments.

It’s a 78 page report, so if you’re looking for some light reading heading into the weekend, you can certainly pore over it, but in case you’ve already got plans, I pulled out a handful of notable highlights. 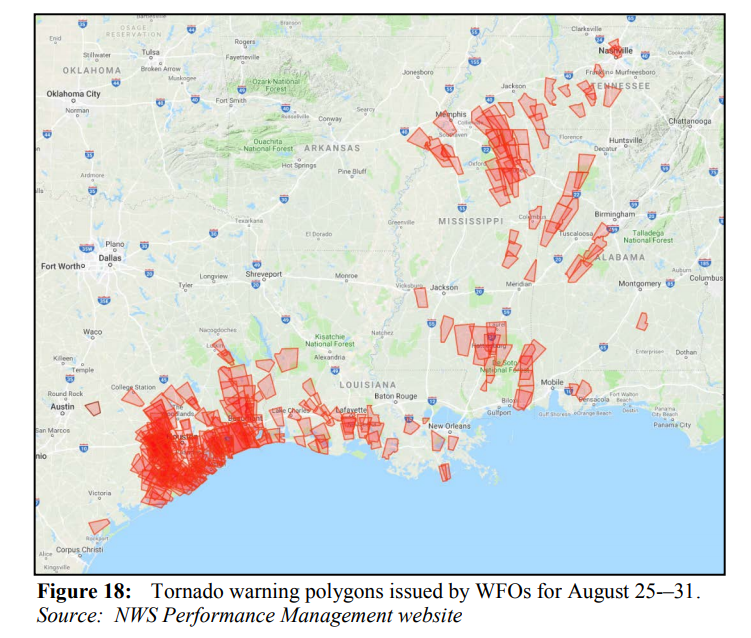 Again, the report is lengthy and a bit in the weeds, but it’s a worthy read if you have the patience and time.

16 thoughts on “Heat and minimal rain chances through the weekend”