Yesterday was nice. It wasn’t perfect, no, but it’s a start on our road to autumn. Unfortunately, like many Houston freeways, the road there is still under construction. More on that in a second. First, some news.

NOAA analysis finds significantly higher rainfall frequency values in parts of Texas, redefining the amount of rainfall it takes to qualify as a 100-year or 500-year event. https://t.co/vgfHqve8wh pic.twitter.com/bY9FtLiMDB

NOAA has completed their analysis of rainfall return period in Texas. Those maps we’ve utilized for 100 and 500 year floods are now officially obsolete. In the Houston area, a 24 hour rainfall of around 13″ used to be required to classify a rainfall event as a “100-year flood.” Remember a “100-year flood” is a flood that has a one-percent chance of occurring in any given year. That 13″ rainfall has been revised up to 18″ of rain in 24 hours to qualify as a 100-year flood. Basically, what we used to define as a 100-year flood is now a 25-year flood. I think most of us knew this already; it had been telegraphed last year, but we can now make it official.

Why is this changing? The previous maps are decades old. The primary reason is that we have more data and better data to work off of. We also know, based on plenty of data, that rain events are getting bigger in Texas, and this is especially disproportionately true in the Houston-area. Ultimately, there will be ramifications because of these map changes. Infrastructure is built to these map standards. Floodplain regulations are based on these map standards. These changes have been well-telegraphed since Harvey, so some of this process is already underway. But it’s a slow process, so don’t expect changes next month. It’s a start, however.

On to the weather…

Radar is mostly quiet this morning, though we are beginning to see a few showers near the coast as of 5:30 AM. More noticeably, we still see a good deal of cloud cover in the area.

A satellite loop shows low clouds (white), mid-level clouds (yellow), and high clouds (dark colors) moving through the area this morning. Sunshine will be at a premium, especially southeast of Houston today. (College of DuPage)

On the loop above, the bright white indicates lower stratus clouds and the darker colors indicate higher cirrus clouds. The yellow offshore indicates showers and mid-level clouds. Bottom line: We have a lot of clouds around, so sunshine will be limited today, especially south and east of Houston.

As the day goes on, we expect to see scattered showers and storms develop, initially near the coast and spreading a bit further inland as yesterday’s cold front begins to return as a warm front. Look for high temperatures today to hit the low-to mid-80s.

As that onshore flow picks up further, look for scattered to numerous showers and thunderstorms this weekend. If I had to pick a day, I would say Saturday has the higher chance of widespread storminess versus Sunday. But both days look rather gloomy from this standpoint.

Ingredients begin to come together more aggressively after midnight tonight and into Saturday morning. I would expect to see rain and thunderstorms begin to blossom along the coastline overnight. Slow moving storms could dump heavy rainfall, and given how wet it has been (see below), another round of street flooding can’t be ruled out for folks in Galveston County if this sets up how it is looking like it may do. There are questions as to how far inland that heavier rain will get. If you drew a line along US-59 south of Houston to I-10 east of Houston, the best odds of widespread storms would likely stay south of that line. I’d expect more scattered, hit or miss storms north of that line. But bottom line: Periods of heavy rain are likely for parts of the area, particularly coastal areas late tonight and on Saturday.

Sunday should see more scattered activity (not quite as well organized in the Houston area). I think the more widespread storm threat Sunday is to our east near Beaumont and Lake Charles. 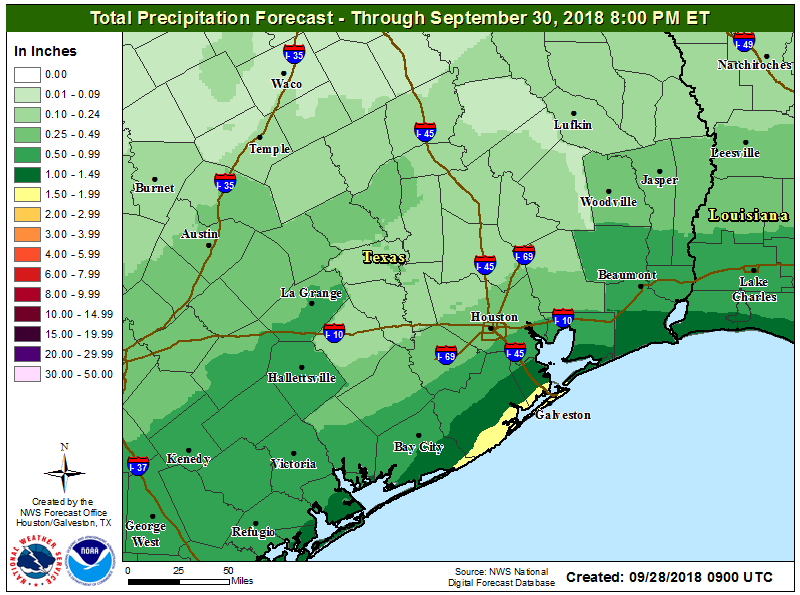 On average, an inch to two inches of rain is likely along the coast, with lesser amounts inland this weekend. (NWS Houston)

How much rain? I’d expect one to two inches of rain this weekend along the coast on average. Higher amounts are likely depending on exactly how storms orient tonight and Saturday. Again, street flooding may be an issue once more in the Galveston area. Inland I’d say about a quarter-inch to a half-inch on average, though some folks will see substantially less, and others a little more.

Galveston has received 22.17″ of rain so far this September, making it the third wettest of any month on record in Galveston since the 1870s. The top two values are just over 26 inches, with August 2017 (Harvey) topping the list at 26.67″ during the month. While it wouldn’t be impossible for Galveston to see 4.5 inches of rain this weekend to match that record, I wouldn’t go to Lake Charles and bet on it at this point; it’s still a big gap to overcome.

As for temperatures, look for highs to be held down due to clouds and rain. We expect low 80s at best during the day (maybe mid-80s inland if rains hold off) and low 70s at night.

Mixed news for next week: Yes, it will be getting hotter. We expect high temperatures to bubble up through the 80s back to perhaps 90 degrees by midweek. But, rain chances will begin to drop off a bit. I would still say scattered storms on Monday, but they’ll become more isolated in nature Tuesday, Wednesday, and Thursday.

When’s the next cold front you ask? Your guess is as good as ours. Just kidding; you read us to answer these questions. I’ve looked at the various weather modeling and the earliest I see our next cold front would be about October 8th. The European ensemble suggests we might get something into the Southern Plains then, though it would likely be brief. As with Galveston rainfall records, I wouldn’t be headed to Lake Charles to bet on cooler, drier air on October 8th just yet however. We will be watching closely.