Summer continues, with a high temperature of 96 degrees on Monday, and more heat ahead. According to the National Weather Service, through Sunday, Houston Intercontinental’s average temperature of 84.1 degrees is 2.8 degrees above normal, and tied for the 3rd warmest such period on record (1st place is 84.8 degrees in 1995). Houston’s Hobby Airport has had its second warmest start to September ever.

Another hot one. While we can’t rule out some isolated rain showers this afternoon, like we saw on Monday, most of the area will see mostly sunny skies. Temperatures should again rise into the August-like mid-90s. Brutal.

Some drier air will move into the state from the northeast later on Tuesday. While this is technically a “front,” we’re not going to see much of a cool down. But at least there will be a little less humidity for a day or so. Under sunny skies we should see highs in the low 90s, and lows in the lower 70s. Rain chances are near zero.

As high pressure continues to retreat we’ll see a break from the really excessive heat, and should fall back into a late summertime pattern. That means highs around 90 degrees, lows in the mid-70s, and a chance of sea breeze-driven showers during the late morning and afternoon hours. Shouldn’t be too bad.

The weekend is still in flux. It appears as though we’re going to see a healthy amount of moisture flowing in from the Gulf of Mexico, but there’s some question as to how much of a forcing there will be to drive that moist air upward, and produce some rain showers and thunderstorms. I think it’s reasonable to expect a good 30 to 50 percent chance of rain, with highs around 90 degrees. 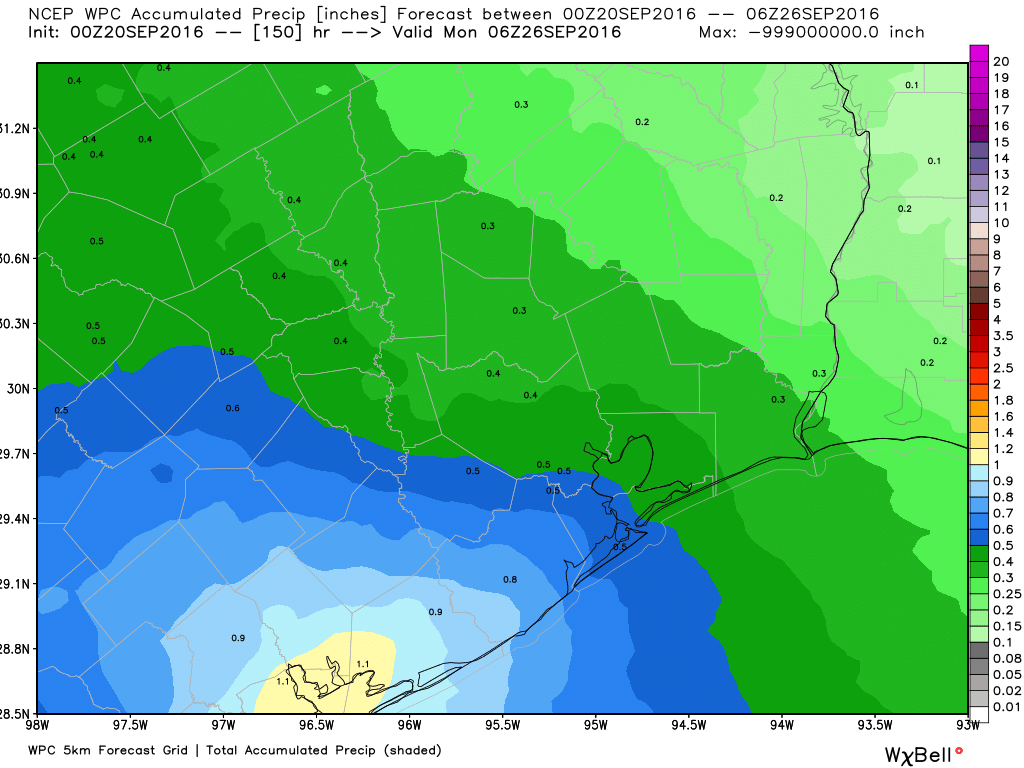 END_OF_DOCUMENT_TOKEN_TO_BE_REPLACED

As this site mentioned on Friday, Houston faces an abnormally warm, summer-like week. But does it have to be this warm? On Sunday highs topped out at 97 degrees at Bush Intercontinental Airport, coming to within a couple of degrees of setting a high temperature for the day. More of the same, I am afraid, is on the way for the rest of the work week.

Alas, we’ve fallen back into a typical summer-time pattern for the region. That is to say high pressure is dominating over much of middle America, including the state of Texas. This is going to push down rain chances (we’ll probably only see a few isolated showers along the sea breeze this afternoon), and drive up temperatures. Highs will climb into the mid-90s or, as we saw Sunday, possibly the upper 90s. The National Weather Service says it might even have to issue a heat advisory for today or Tuesday. 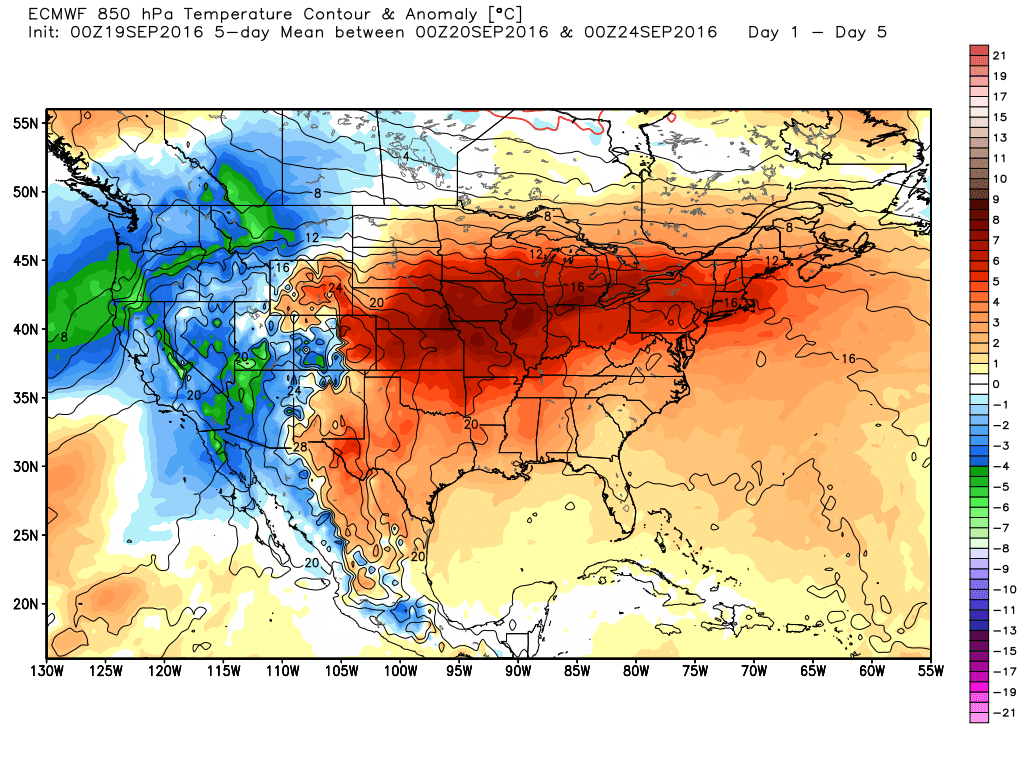 Heat will dominated over the central and eastern United States this week, and Texas is no exception. (Weather Bell)

END_OF_DOCUMENT_TOKEN_TO_BE_REPLACED

Good morning. Just a quick update today as both Matt and I are traveling.

The National Hurricane Center continues to track a broad, disorganized area of low pressure that’s nearing the Texas coast and should come ashore today. Chances of development are near zero, but it is helping to usher in some moisture to the Texas coast.

This is likely to produce scattered to widespread thunderstorms later today and on Saturday. Although there isn’t any great organization, moisture levels will be quite high and it seems likely storm motions will be slow. This means that where storms do develop there will be the potential for some heavy rains that could cause street flooding. However I do not anticipate widespread flooding concerns. Storms will be most likely during the warmer, afternoon and early evening hours. Highs will remain around 90 degrees. 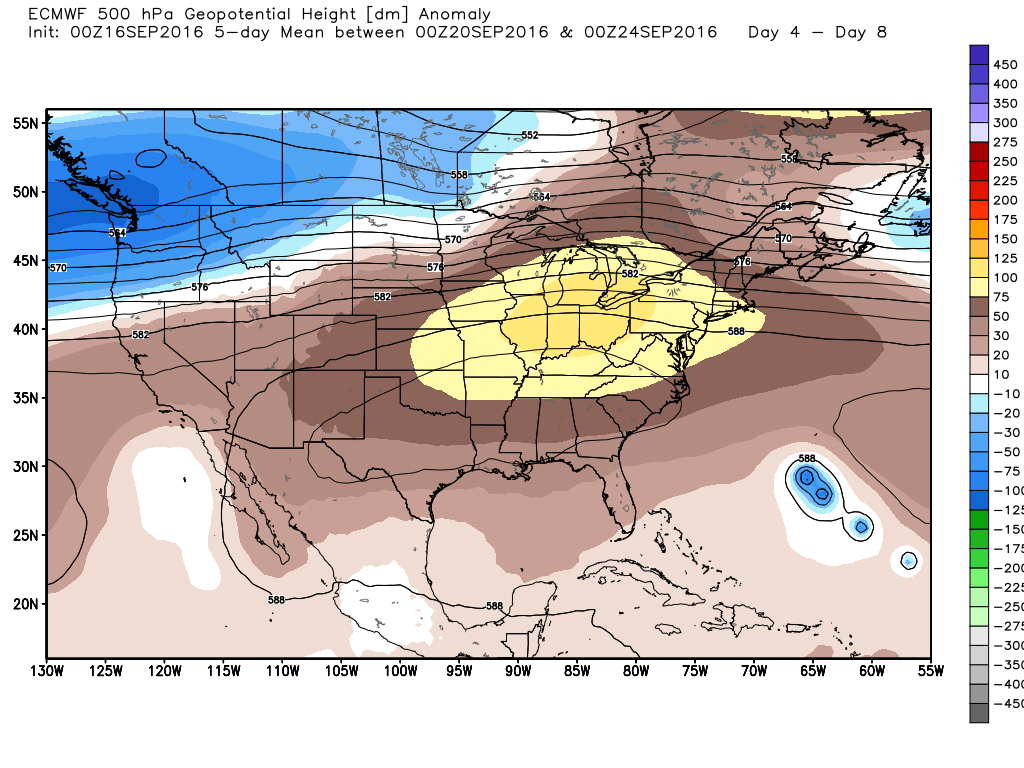 END_OF_DOCUMENT_TOKEN_TO_BE_REPLACED

It’s quite warm, in the mid-70s, and muggy across Houston as we reach the midpoint of September. The radar is also dry, but that won’t last too long with tropical moisture looming offshore.

Most of the moisture isn’t going to arrive just yet, and enough lingering high pressure should limit showers and thunderstorms today, especially for inland areas. I’d only expect scattered to isolated storms, with highs around 90 degrees.

You may have noticed that the National Hurricane Center has started to track a blob of tropical moisture that is moving toward the Texas coast. Due to significant wind shear this system is highly unlikely to develop into a depression or tropical storm, but Galveston and other coastal regions should nonetheless see some effects, such as stronger than normal waves and tides 2 to 3 feet above normal levels. Rain chances will also be highest along the coast. 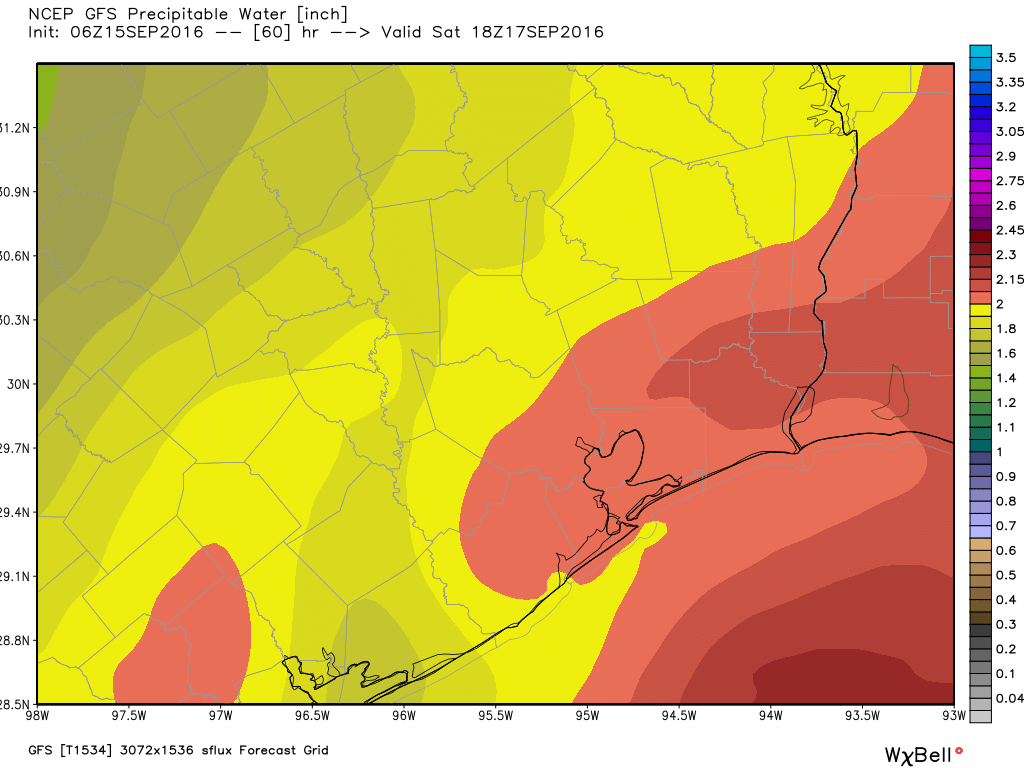 On Saturday precipitable water levels will rise across the region as tropical moisture moves in from the Gulf. (Weather Bell)