Houston’s weather is on cruise control right now, and this delightful stretch of weather is still on track to continue into the weekend. The forecast in a moment, but first some housekeeping.

Another, more intriguing item I’ve been tracking has been Galveston and their affinity for record high temperatures this winter. In fact, Galveston has tied or set new record highs on 31 days since November 1st of this past year. It’s not as if Galveston is new to recording weather data either. Records there go all the way back to 1874, which is a really solid set of data for a location. Houston has only set 12 new record highs in that same span of time, though that is also pretty impressive. 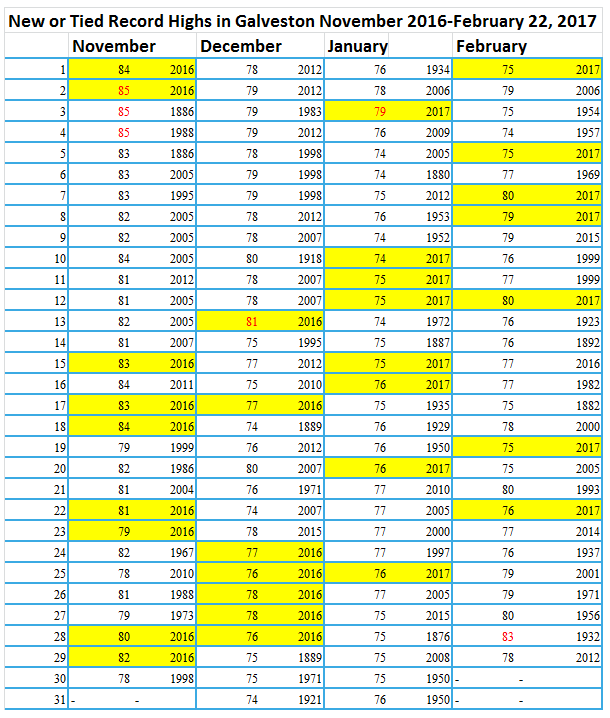 Now, I’m not sure what the odds are of breaking 31 new records in less than four months, but they have to be slim. The primary factor? Likely the Gulf of Mexico. The Gulf is considered to be at a record warm level this winter.

The Gulf of Mexico is sure feeling the warmth this Valentine's Day . Easily the warmest start to any year on record. #tropics pic.twitter.com/QbL9CzcOFO

But, out of an abundance of caution, I reached out to the National Weather Service office in League City to see if they had any concerns about thermometer calibration or recent land-use changes at Scholes Field in Galveston, where the temperature is recorded. They don’t believe there are any siting or thermometer issues, as the days that Galveston has broken records have occurred when, meteorologically, it made sense (temperatures start the day just warm enough to allow Galveston to capitalize on warmer than usual air masses in the afternoon). It’s just been that sort of “winter,” and it’s led to an incredible piling up of record high temperatures along the Texas Gulf coast.

Today will get off to a cool start, but conditions are going to warm up fairly quickly across Houston, and we’ll be warm—but not unpleasantly so—for the rest of the work week.

As high pressure builds over the area, expect mostly sunny skies and highs of around 80 degrees, with some inland areas perhaps climbing into the low- to mid-80s. Still, we can expect conditions to cool down reasonably quickly during the evening hours, with overnight low temperatures in the 50s for inland areas, and 60s along the coast.

The GFS forecast for dewpoints at 7pm Friday evening shows the front having just moved through Houston. (Weather Bell)

Another warm day, with mostly sunny skies and highs of around 80 degrees. The difference will be that a cold front arrives on Friday afternoon or evening. At this time the front still looks dry, so I’m not expecting any rain along with its passage.

END_OF_DOCUMENT_TOKEN_TO_BE_REPLACED

Good morning. After Monday’s widespread rain, the region’s weather will now settle down for a while. The continuing story this week will be much the same as it’s been for this winter, warmer than normal temperatures. We’re almost certainly going to smash the record for total number of 80-degree days in “winter,” defined here as December through February. We’ve had 17 days with highs of 80-degrees or warmer this winter, and that ties the previous record set during the winters of 1995-96, 1956-57, and 1910-11. This week we’re likely to pick up at least one or two more 80-degree days before a front moves through.

However, with that said, this week’s weather should be quite pleasant. Despite the warmer days, it won’t be too humid, and nights will cool off. And this weekend? Oh my.

A weak front will move through today, bringing some drier air out of the northwest. Although there’s a slight chance of rain with the front, most areas won’t see any precipitation and skies will remain mostly sunny for the most part. Highs today should be in the mid-70s, with lows tonight in the 50s—warmer for the coast, cooler for inland areas.

High pressure will settle over Houston, bringing two sunny days to the region. Look for highs of around 80 degrees, and lows of around 60 degrees. As it won’t be overly humid, both days should feel pretty great.

END_OF_DOCUMENT_TOKEN_TO_BE_REPLACED

As anticipated, a line of heavy rain showers and severe thunderstorms is moving into western Houston this morning, and will move east through the entire metro area during the morning hours. The main threat from these storms is locally heavy rainfall, and some street flooding. A secondary threat is damaging winds, with gusts up to 50 mph possible. Severe thunderstorms appear to be most likely along, and north of Interstate 10. 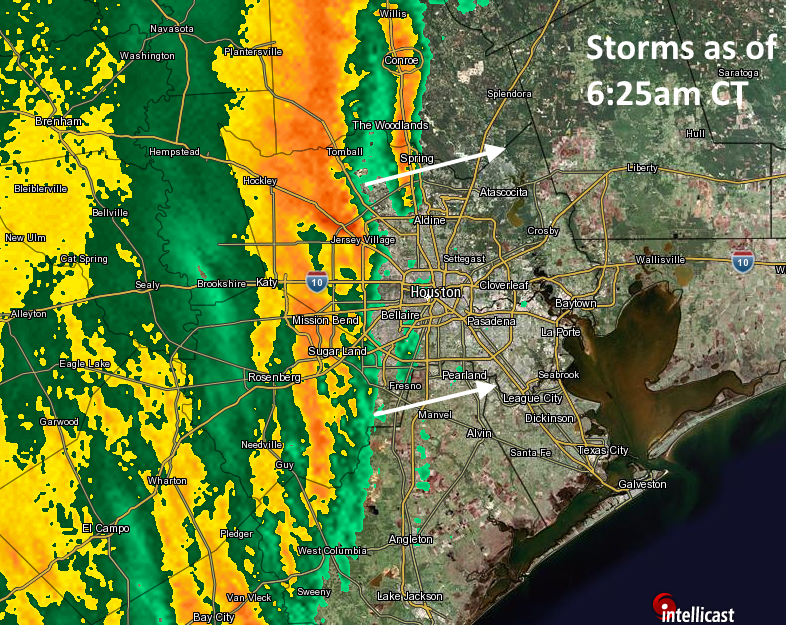 A line of storms is moving through Houston, shown at 6:25am CT on Monday. (Intellicast)vere

These storms have developed along with an upper-level low pressure system, that will also be moving through the region today. The net effect of this is that heavy rainfall will occur with the main line of storms, and light to moderate showers may linger this afternoon. The flooding threat should end around noon, however, when the heavier storms clear the area. I’d expect rain accumulations for most area to be about 1 to 3 inches, with higher, isolated totals of 5 or more inches.