The big picture for our weather during the last two days of 2020 remains the same: A slow-moving front will approach Houston, but likely stall west of the metro area. This will make for a stormy period from Wednesday afternoon into Thursday afternoon before conditions clear up heading into the new year. The first few days of 2021 should be clear and cool for the Houston area.

It’s mostly cloudy and humid this morning, with temperatures only falling into the low- to mid-60s for much of the region. For today, southerly winds will be gusty, perhaps as high as 20 mph. High temperatures later today will climb into the mid-70s, and we’ll start to see some scattered showers later this morning. The approaching front will be a larger driver of storms, and where it stalls will determine which areas see the heaviest rainfall during the overnight hours. For now, it seems the front will stall just west of Harris and Montgomery counties. Rain chances will increase during the afternoon and especially overnight hours. 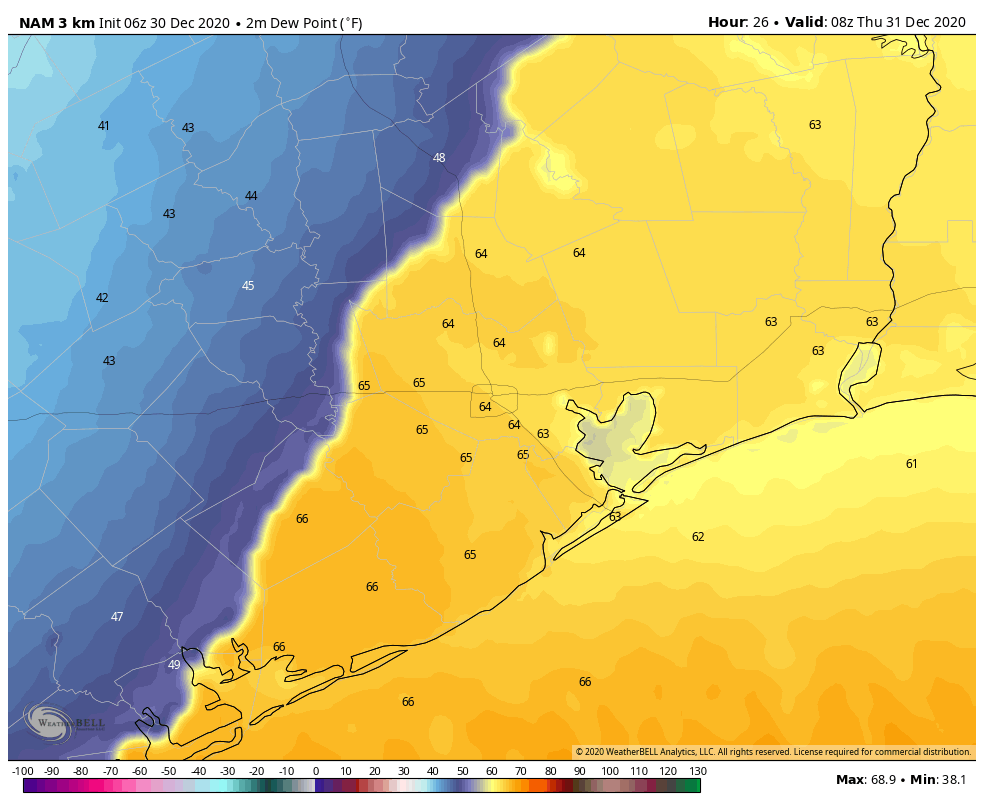 NAM model forecast for location of stalled front in the wee hours of Thursday. (Weather Bell)

With the front stalling just west of Houston, our region is likely looking at another warm night, in the 60s, and a humid day. With the perturbed and moist atmosphere, rain chances will persist through much of Thursday afternoon, with widespread totals of 2-3 inches west of Interstate 45, and 1-2 inches for areas east of Interstate 45 between now and then. Finally, the front will shove through the area on Thursday afternoon, and this should bring an end to precipitation by sunset, or shortly before. Dry, westerly winds will follow the front’s passage, with temperatures dropping into the 40s as midnight approaches. 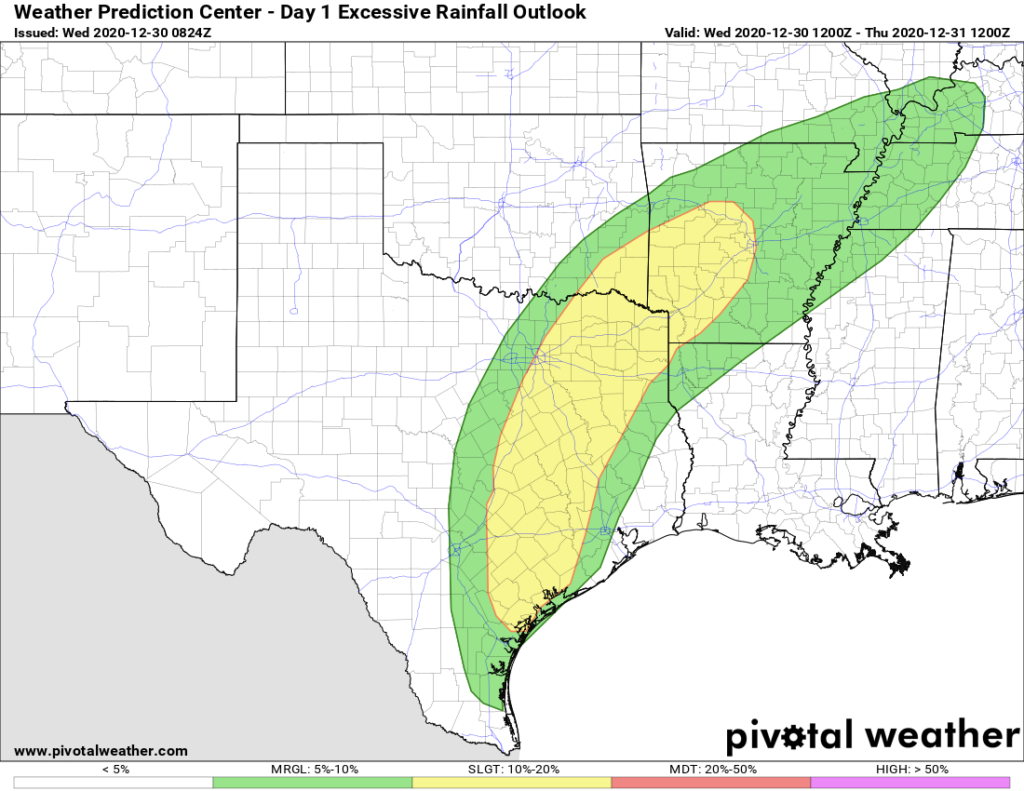 Areas in yellow have a “slight” chance of seeing excessive rainfall. (Pivotal Weather)

We’re expecting a cool and clear day, with highs in the upper 50s, and westerly winds at 5 to 10 mph. Lows will drop to around 40 degrees on Friday night.

The weekend looks sunny and fine, with highs in the upper 50s on Saturday, and lower 60s on Sunday.

We should see a warming trend next week, with highs perhaps reaching the 70s by Tuesday or so. Another front may be in the cards by around next Thursday, although overall confidence in the models is low. Regardless, rain chances after New Years’ Eve will remain low until that time.

The greater Houston region is still looking at a wet period on Wednesday and Thursday before clear and colder weather arrives in time for the new year. The first three or four days of 2021 should yield sunny, winter-like weather.

Temperatures have fallen to around 60 degrees for much of the area this morning, and winds are noticeable, out of the east at about 15 mph. They will gust above 20 mph later today as the onshore flow continues, pumping up moisture levels in the atmosphere. This should, in turn, increase cloud cover and limit high temperatures to around 70. Rain chances are probably about 10 percent. Low temperatures will drop into the low 60s, for most. 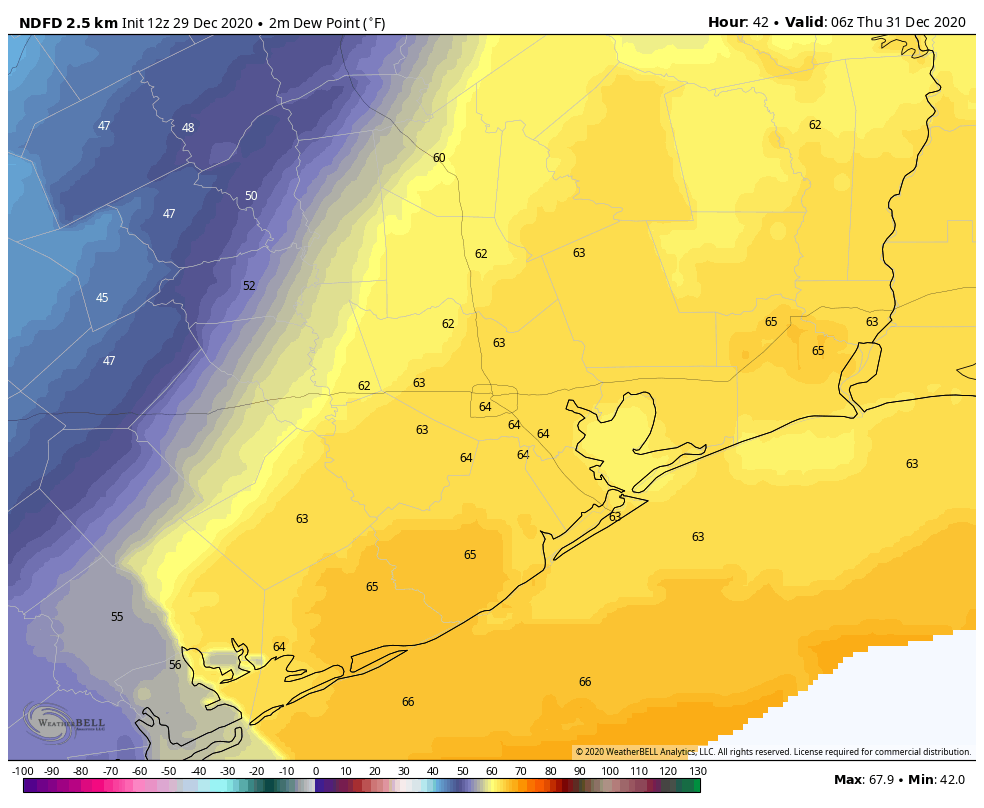 This dewpoint forecast shows the approximate position of the front on Wednesday night, at midnight. (Weather Bell)

These two days will see inclement weather as an upper-level low pressure system approaches the area, and slowly drives a cold front into the region. This front will make it into the western periphery of the area—probably within a few dozen miles of Katy—late on Wednesday. It will then more or less stall for half a day before shoving through the region later on Thursday. The proximity of this front, and the ample moisture in our atmosphere, will drive healthy rain chances from Wednesday afternoon through the middle of Thursday.

Much of the area is likely to see 2 to 3 inches of rain, with localized amounts of 5 inches possible. The best chances for heavy rainfall will come west and north of the metro area. Wednesday and Wednesday night will be warm, with temperatures falling quickly on Thursday when the front finally passes. (It looks like precipitation will exit before the atmosphere gets cold enough to produce anything more than rain.) We should see clearing skies on Thursday afternoon or evening, with temperatures falling into the 40s on New Year’s Eve, heading into New Year’s Day. 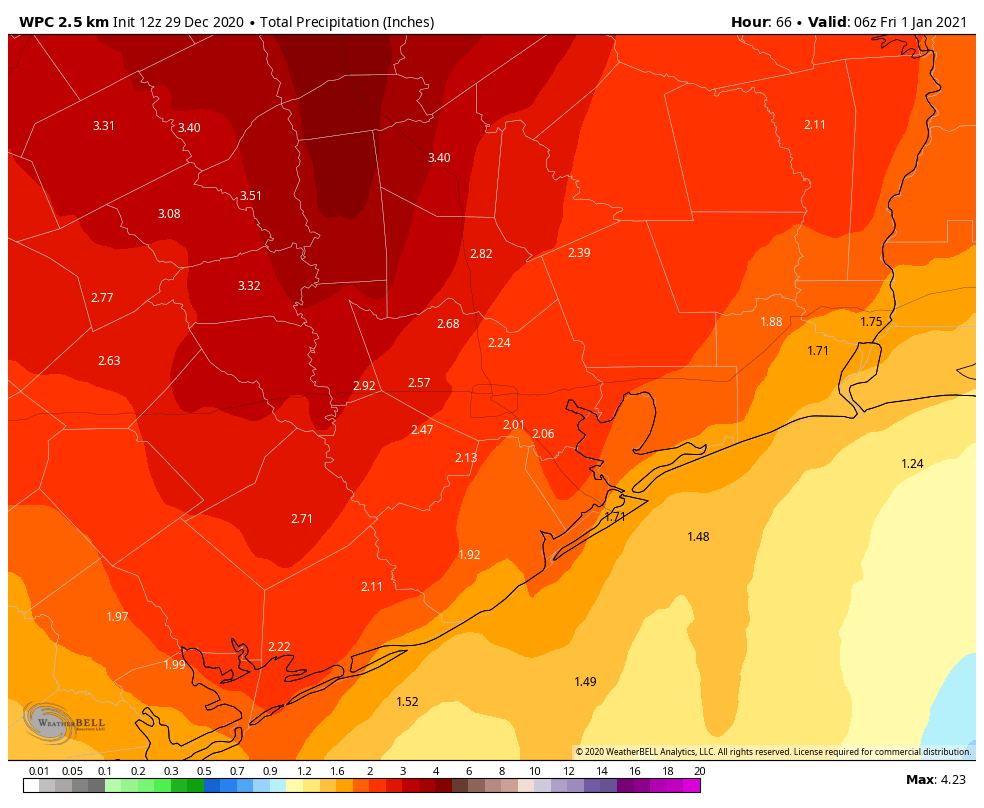 Expect a sunny day, with highs in the upper 50s.

The weekend should bring more fine weather into the area, with highs in the 50s to low 60s, lows in the 40s, and lots of sunshine.

Most of next week should bring highs in the 70s with lows in the 50s. For now we don’t see anything too exciting in terms of cold weather or precipitation.

Good morning. Houston will see three warm days before a front arrives on Wednesday to usher in clear and cool conditions for the New Year. Perhaps the most noteworthy feature this week will be the potential for heavy rain and storms on Wednesday and Wednesday night along with the slow-moving front, with much of the area receiving 2 to 3 inches of rainfall. We cannot entirely rule out this precipitation turning into a wintry mix north of Houston later on Thursday. 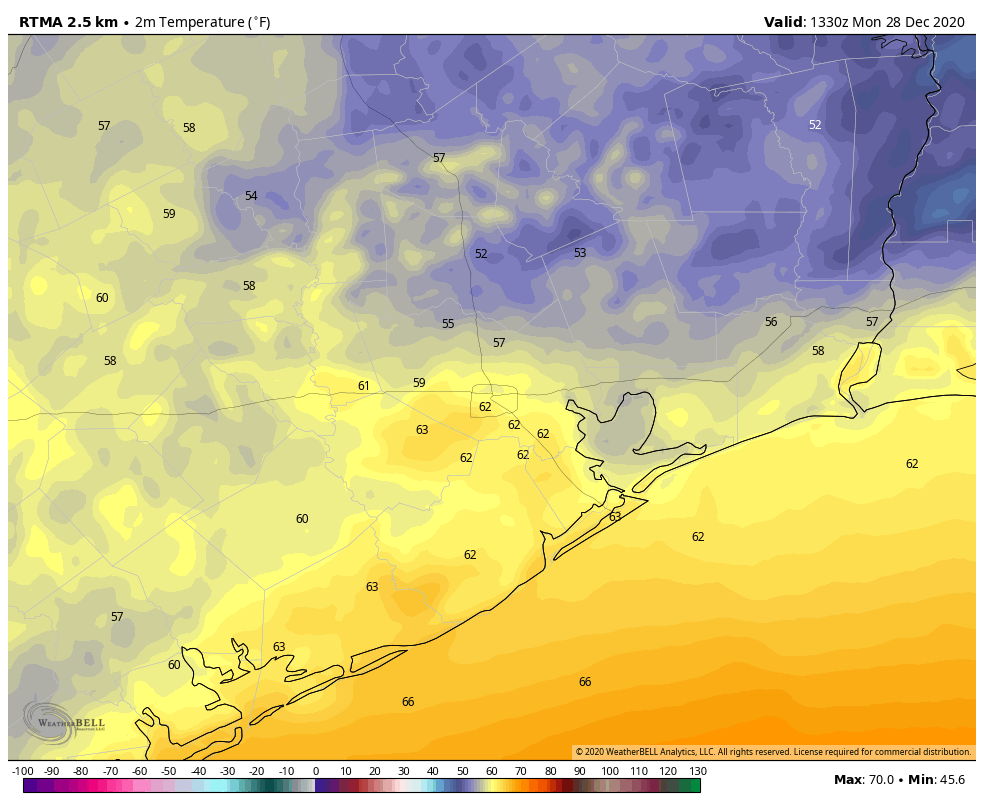 Low temperatures this morning are quite a bit warmer. (Weather Bell)

As winds continue to blow from the southeast, our atmosphere will continue to moisten today. This will result in increasing cloud cover, and highs generally in the low 70s. A cold front will approach our area tonight, but stall out well north of the metro area. As a result, temperatures should again fall to around 60 degrees in Houston—warmer near the coast, and cooler inland.

Another warm day, for December, a lot like Monday. Expect mostly cloudy skies, with highs in the low 70s. Winds will be fairly gusty, out of the southeast at 10 to 15 mph, with higher gusts. Lows Tuesday night will again be fairly sticky.

Wednesday will start out with partly cloudy skies and another warm morning, as the front approaches. During the morning and early afternoon we likely will see light, scattered showers. Rain chances will increase during the afternoon, evening and overnight hours as the front slowly moves from west to east. This is where the forecast breaks down some, as the feature approaching the Houston area will be cutoff from the main atmosphere circulation, and thus will probably move more slowly.

As this system approaches our warm and moist atmosphere, it will create conditions where some strong storms will be possible on Wednesday night into Thursday. Most of the area should see a solid 2 to 3 inches of rain during this period, but we can’t rule out a few isolated areas with 5 inches. Details on this forecast will improve by Tuesday, as higher-resolution models come into play. 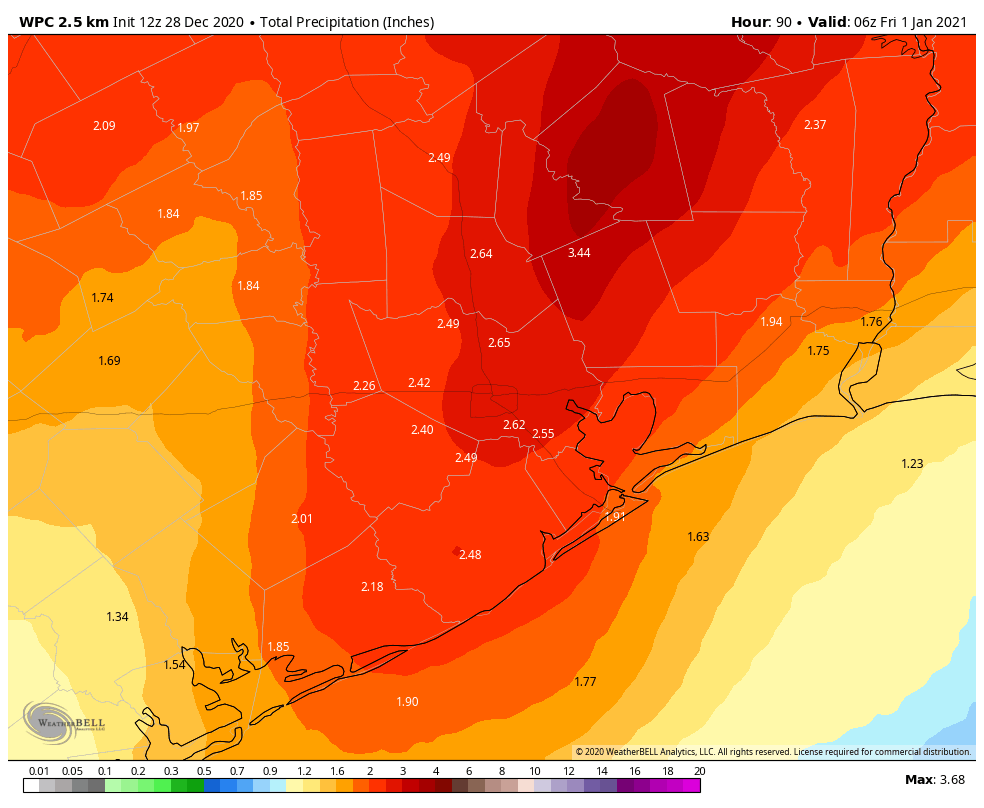 As colder and drier air comes into play on Thursday, rain chances will end over much of the metro area later in the day. However, a few showers may linger north of Houston, and as the colder air moves in on Thursday evening, the chance of some sleet or a few flurries in a place like Montgomery County is above zero, but only slightly. Thursday night—New Year’s Eve—will be cold across the region, with much of Houston reaching freezing, or near freezing conditions. 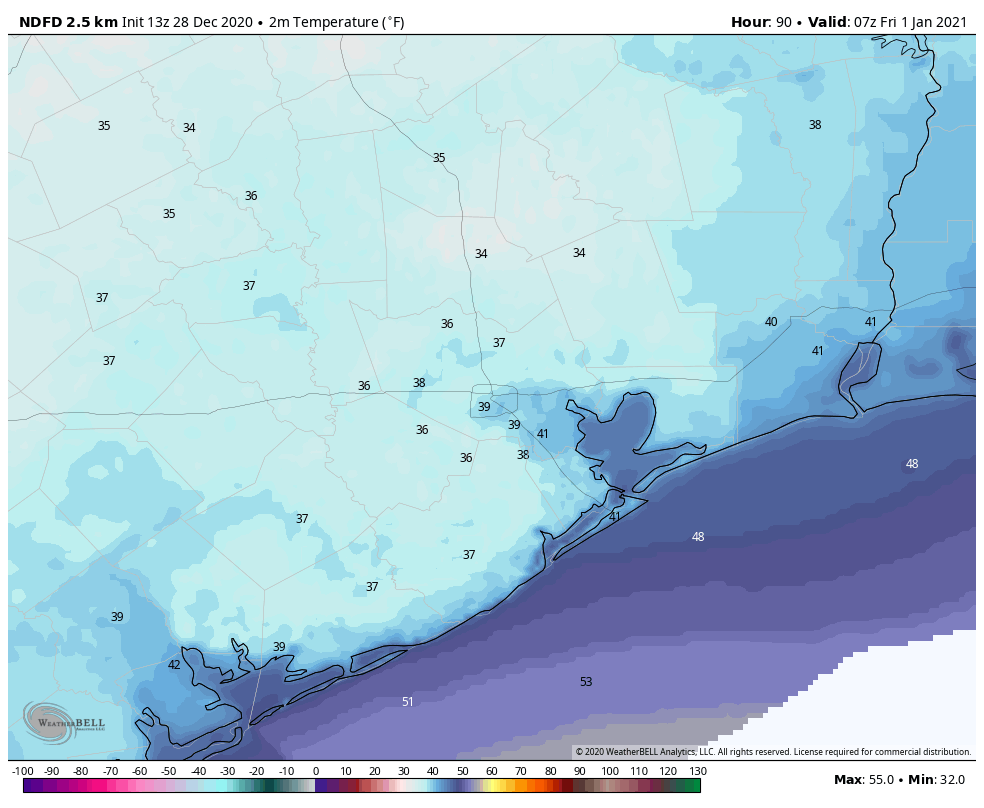 The first day of 2021 should be mostly sunny and cold, with highs only reaching the upper 50s, most likely. We’ll see another chilly night on Friday night.

The weekend looks splendid, with sunny skies, and highs in the upper 50s to low 60s, and nighttime temperatures down around 40 degrees. A sign, perhaps, that 2021 will hold more promise that this year now ending?

Good morning. We’re expecting cold conditions between now and Christmas morning, after which there will be a warming trend, and calm weather through the weekend. Because of this, Matt and I will be taking a three-day weekend to spend time with our families. Please let us wish you and your families the very warmest greetings in this year of years, and a hope for better tidings in coming times.

As promised, it is cold and blustery this morning. At 7 am, winds were still gusting to 38 mph at Hobby Airport, and above 40 mph at several locations along the coast. To go along with that, temperatures are generally only about 40 degrees, making for wind chills in the 20s.

Skies are already clearing, but due to this influx of cold, dry air highs today will struggle to climb much above 50 degrees. Winds, fortunately, should slacken throughout the day, although they’ll remain gusty until sunset. As the Sun drops toward the horizon, temperatures will follow, with parts of the area seeing a light freeze tonight. 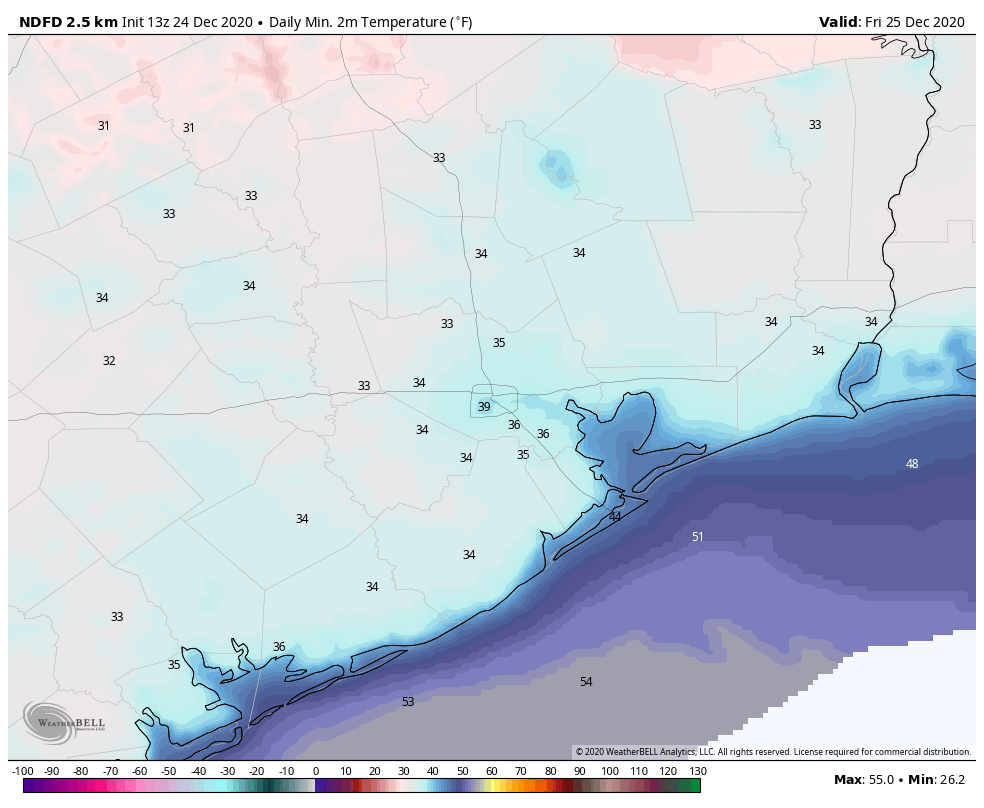 We’ll see a splendid, sunny, winter day for Christmas. Winds will be light, out of the west, and highs should reach about 60 degrees, or slightly above. Lows will be 5 to 10 degrees warmer on Christmas night, as winds shift to come from the south.

The weekend should see partly to mostly sunny skies, with highs in the upper 60s on Saturday, and lower 70s on Sunday. Some very light rain will be possible later on Sunday, but I expect Houston will remain dry. By Sunday night, temperatures may not drop below 60 degrees for some coastal areas.

A cold front will approach the greater Houston region on Sunday, but most model guidance now indicates it will stall out near College Station and Huntsville, rather than pushing into Houston itself. Due to the stalling front then, the most likely conditions for the first half of next week are partly to mostly cloudy skies, the potential for light, scattered showers, and highs somewhere in the 70s.

Houston will see a warming trend through early next week. (Weather Bell)

A second front likely will probably push all the way into Houston sometime on Tuesday night. There are some indications, especially after a few days of onshore flow, that this front will produce an inch or two of rainfall during the middle of next week—but our overall confidence is not high. In any case, we’re probably looking at clearing skies and colder weather for New Year’s Eve and New Year’s Day.

We’ll see you on Monday, everyone. Be safe, be of good cheer, and be good to your fellow humans.