Good evening. We’re continuing to monitor conditions across the metro area and rainfall totals remain manageable for most of the region. We have two main concerns: flooding along the West Fork of the San Jacinto River, and the potential for more heavy rainfall later tonight as a main line of at least semi-organized storms moves through. Overall, most of Houston will come through this just fine, we believe.

The West Fork of the San Jacinto River, which is downstream of some of the heaviest rainfall today, may potentially go into major flood stage on Saturday or Sunday. According to the Harris County Flood Control District, the following subdivisions may see impacts: Forest Cove, Rivercrest, Northshore, Belleau Woods. Kingwood and Atascocita appear unlikely to be affected at this time. 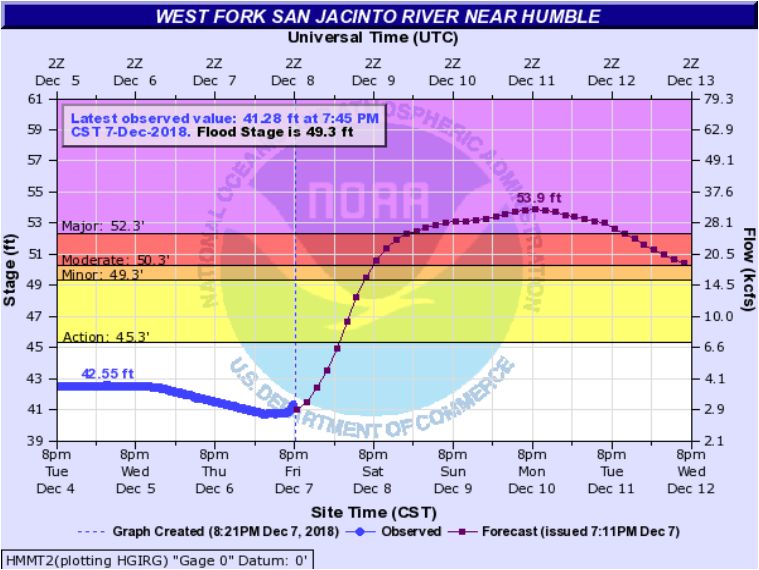 So far today, rainfall amounts for most of the metro area have remained near 2 inches or less (we’ve seen more than this up north, in some parts of Montgomery County and elsewhere). These are quite manageable for area bayous.

As of 8:45pm CT we are seeing storms get organized just west and north of Houston, and from now until about 3am CT we are likely to see the potential for additional heavy rainfall as this mass of storms moves through, from west to east along with the front. Conditions will likely deteriorate for much of Houston over the next hour or two, so now is the time to be wrapping up any activities and getting home.

Most areas may see an additional 1 to 3 inches of rainfall from now through 3am—which should be fine for most bayous—although a few areas may see a bit more than this. After 3am we should see a slackening in rainfall on the west side of the metro area, and then a gradual ending beginning shortly before sunrise from west to east.

Saturday will be gray, and chilly, with highs in the 50s and blustery northerly winds.

We will update later tonight if warranted.

10 thoughts on “8:45pm Update: Main area of storms getting lined up west of Houston”