Rains so far today have stayed mostly to the north and west of the Houston metro area, as anticipated. As of 2pm CT, just south of Huntsville is the big “winner” with about 4 inches of rain falling so far. Not a whole lot has changed with our forecast, but I did want to call out a few things we’re watching as we get closer to heavier rainfall this evening and during the overnight hours.

Models not showing extreme totals: None of the high-resolution models are really bombing out huge rain totals with this event. So while some forecasts have been calling for up to 10 inches of rainfall during the next 12 to 24 hours. We’re feeling more comfortable with 7 or 8 inches as an upper limit, with most of the area seeing 2 to 5 inches of rainfall.

Heavier rains more likely north: Some of the models suggest the heavier rain totals (5 inches or more) will generally fall north of Harris County, with most of the metro area remaining under that threshold. Other models show the rainfall pretty well dispersed, so we’re not overly confident with this part of the forecast.

Line of storms timing: The point at which the front (and a line of strong thunderstorms) moves through Houston has moved up somewhat, and now appears likely to sweep through the region, from west to east, between around midnight and 3am. This is the time when you definitely won’t want to be out and about due to the potential for heavy rainfall, flooded streets, and strong thunderstorms. 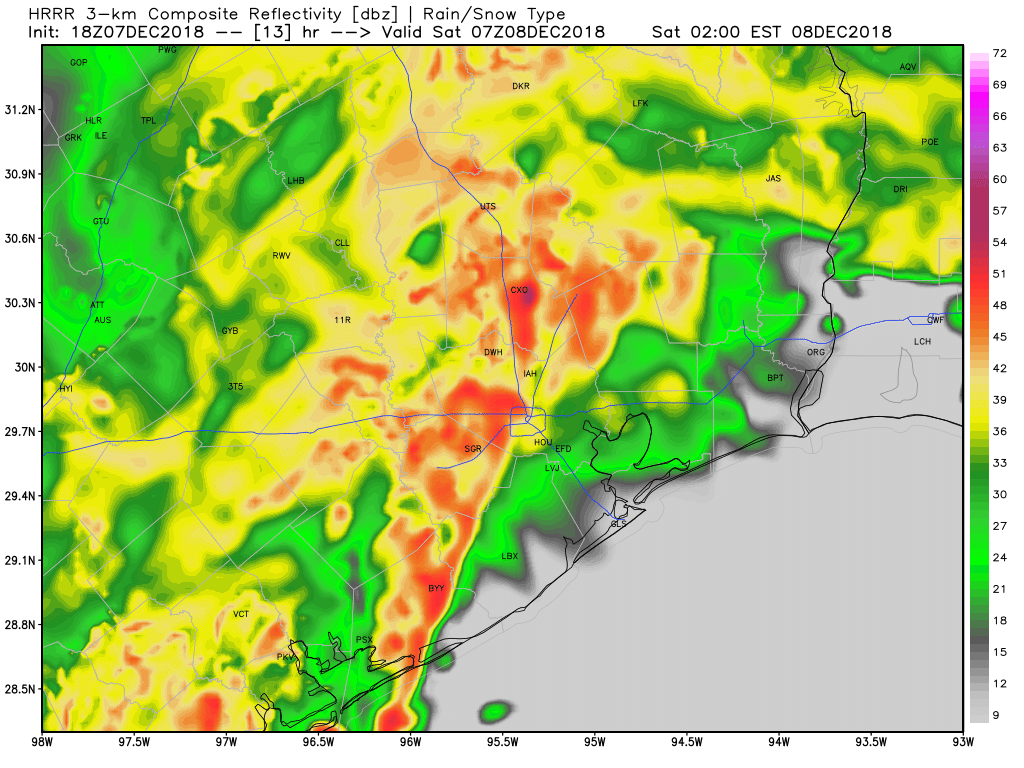 HRRR model forecast for line of storms as of 1am CT Saturday. (Weather Bell)

Flooding potential: Because some of the heaviest rainfall will occur well inland, we’ll have to watch for potential flooding along the Trinity, San Jacinto, Brazos, Navasota, San Bernard, and Colorado river basins. In terms of bayous, Jeff Lindner of Harris County said he’s most concerned about bayous and creeks across the northern, northwestern, and northeastern parts of the county: Cypress, Willow, Little Cypress, Cedar, West and East Forks of the San Jacinto, South Mayde, Langham, Bear. We think most of these will probably remain within their banks.

Event will end: We are not overly concerned about Friday night’s event, because it’s going to come to a pretty abrupt end by or before sunrise on Saturday. This will be kind of a nasty rain event for December, but if this were July or August, it wouldn’t be considered all that extreme. Our bottom line is that, if you’re overly anxious about this event, it’s probably not going to be as bad as you think.

We’ll be back this evening with an updated forecast.