The Houston region will be a bit warmer today, but then will have about five superb days of spring-like weather before May begins. At that point, I expect we’ll begin to see the end of this glorious run of spring.

We’re going to see some warmer weather today, with mostly sunny skies and light southerly winds allowing for highs to nudge up into the mid-80s across the region. I wouldn’t be surprised to see some areas south of Houston push into the upper 80s. In any case, it will be warm—a harbinger of how early May is likely to feel. 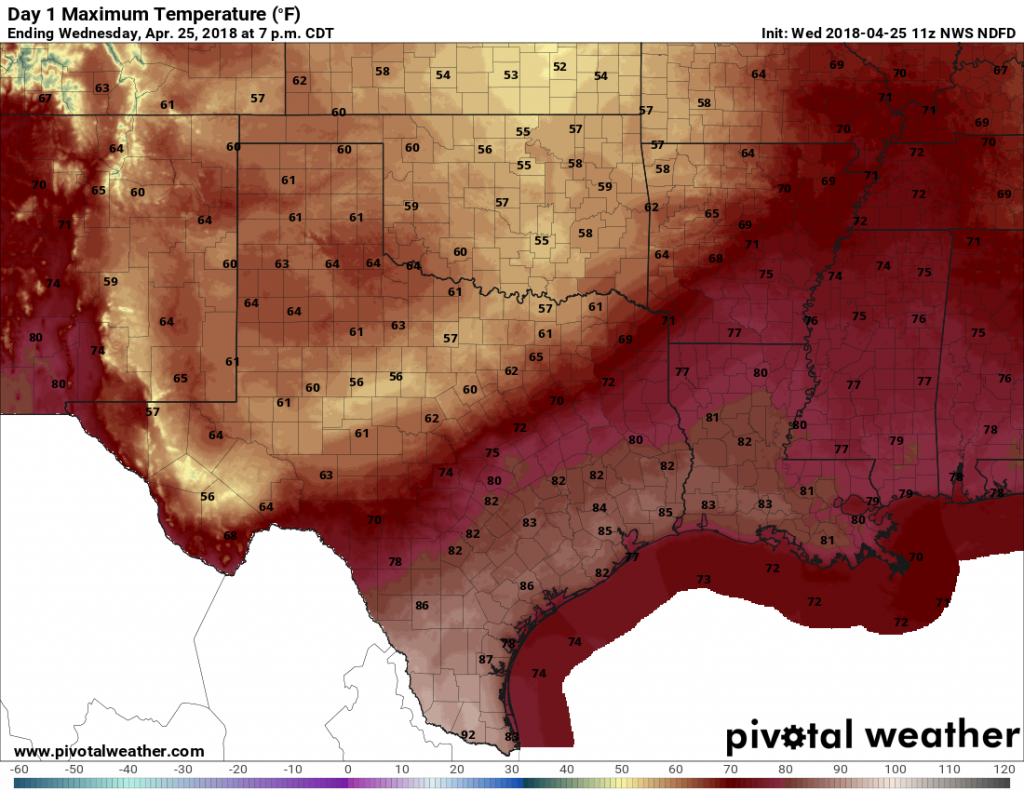 High temperatures will be warmer on Wednesday. (Pivotal Weather)

This won’t last, however, as a cold front is on the way. It should push through Houston sometime tonight, probably a few hours before midnight. The most likely scenario is that we’ll see a broken line of showers and perhaps a few thunderstorms with the front’s passage tonight. However at this point I still don’t expect everyone to see rain, and areas that do probably won’t see more than a tenth or two of an inch.

The rains should end before sunrise on Thursday, and we’ll see clearing skies during the morning. The rest of the work week just looks simply amazing. We’re talking highs generally in the upper 70s, lows in the lower 50s for inland areas, mid-50s for the city, and lower 60s for the coast. We’re talking lots of sunshine. And we’re talking light winds.

Moreover, this time the exceptional weather won’t end when Saturday rolls around. The day will start out cool, in the mid-50s, and I still only expect very light northerly, or northeasterly winds. With partly to mostly sunny skies, we can expect high temperatures to rise to about 80 degrees during the afternoon, and winds will probably shift to come out of the southeast later in the day.

Sunday morning will be a few degrees warmer, as the onshore flow begins to get in gear overnight on Saturday, but highs during the mostly sunny afternoon should be about the same—around 80 degrees. If you’re riding into Austin I’d expect a tailwind at you back for the BP MS 150.

We move from April into May on Tuesday, and that’s about when I expect us to jump back into more normal weather for this time of year (see the graphic below, of the “temperature anomaly” forecast). 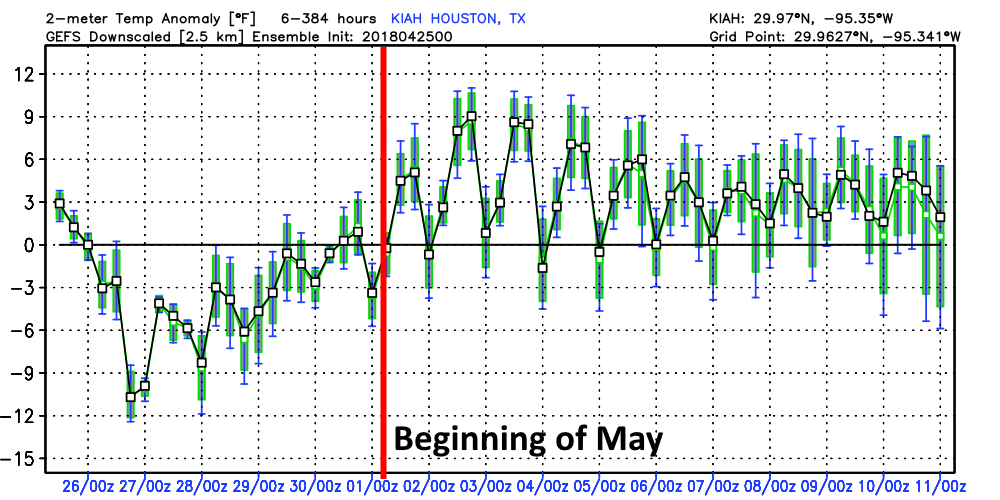 GFS model for temperature anomalies over the next 16 days. (Weather Bell)

This is to say, that we’re going to see more days in the mid- and upper-80s soon, with more regular humidity, and considerably warmer nights. All good things must come to an end, and so too it goes with this spectacular April weather.

6 thoughts on “A chance of rain tonight, a certainty of superb weather after that”