Good morning. Lots to discuss this morning from heat this weekend, plenty of activity in the tropics, and longing for the season’s first real cold front.

Moisture levels are falling over the region, but they’re still high enough to squeeze out some scattered showers and thunderstorms. By now you know the drill; most of the area probably won’t see rain, but the areas that do could see brief, intense thunderstorms. Highs should make it into the mid-90s under partly sunny skies.

High pressure should reign, making for a pair of mostly hot and sunny days for the Houston region. Look for highs in the mid- to upper-90s. These will be some of the last really hot days of 2019 for Houston as we get deeper into September. 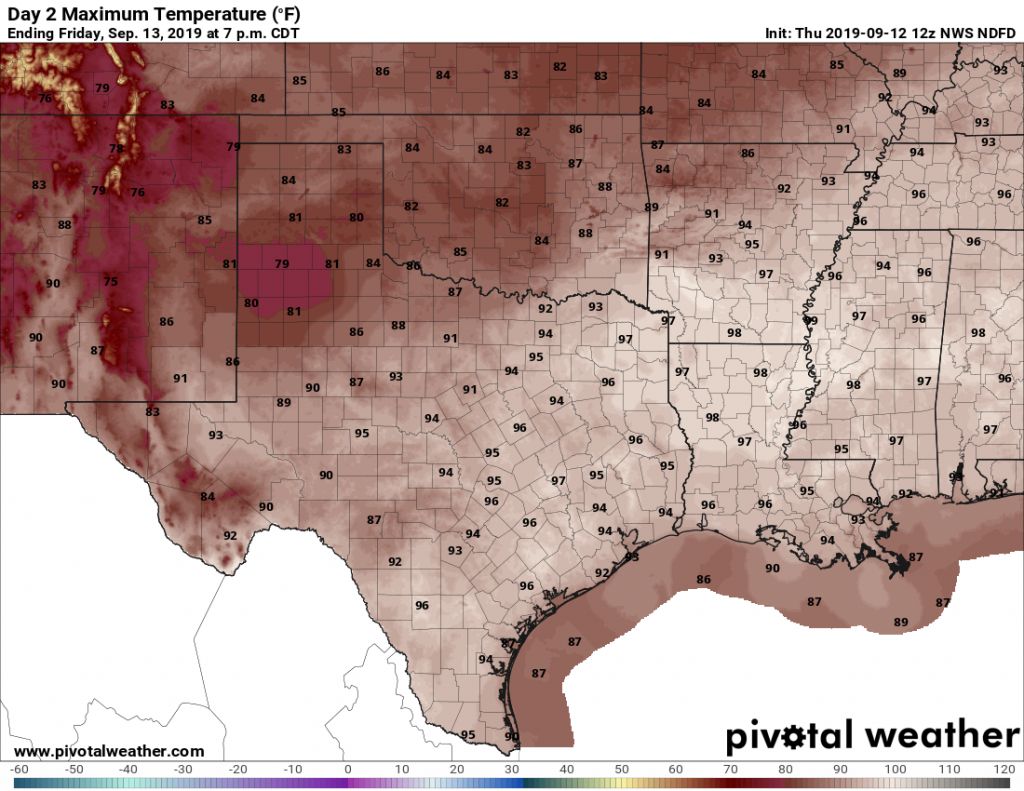 Summer will hold on for most of Texas this weekend. (Pivotal Weather)

Our weather for the second half of the weekend and next week will depend on the track of Invest 95L, discussed below. Most likely, we will begin to see elevated moisture levels pulsing in from the Gulf of Mexico, leading to a 30 to 40 percent chance of rain from Sunday onward. But overall confidence is not particularly high. The question is mostly whether we’re mostly dry, or see a pattern of scattered showers and thunderstorms each day. Highs should be somewhere in the low- to mid-90s.

As one might expect in mid-September, the Atlantic tropics are sizzling. The National Hurricane Center has bumped up development chances for Invest 95L, now located near the Bahamas, to 80 percent over the next five days. There are some questions about where the center of this tropical disturbance will actually set up, and that will help determine its track. At present, most of the better modeling suggests a more northward formation, leading to a track that brings the storm to Florida, or keeps it east of the state, off the coast, like with Dorian. In any case, this is more tropical weather the Bahamas does not need. There is a lesser chance of a formation to the southwest, in which the bulk of the tropical system could drift westward, into the Gulf of Mexico. This might significantly increase Texas’ rain chances next week, but seems like the lower probability scenario for now. 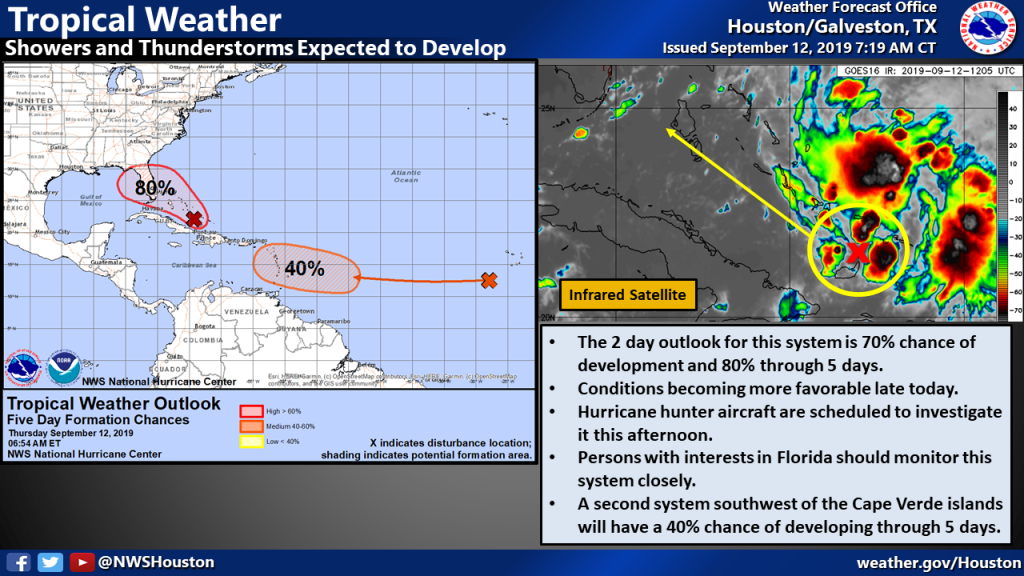 There is also another system out there with a 40 percent chance of developing over the next five days. Right now, the odds appear to be against this system tracking toward the Gulf of Mexico.

Lastly, a lot of you have been asking about the possibility of a cold front, and believe me, we’re desperately looking for one too. For the first time, the global models are seriously flirting with a front in the Sept. 21 to 25 time frame for Houston. Confidence in 10 day forecasts is low, but at least we now have a glimmer of legitimate hope.

20 thoughts on “A hot weekend, tropics tracking, and the region’s first front?”